Thumbnails
I learned early about the value of thumbnails in the planning of a scene.  This prevented a lot of headaches (my own) by working a scene or scenes out in these small rough drawings first, then showing them to the lead animator or director before starting to animate. By doing this I was able to animate with confidence knowing my superiors knew what direction I was headed.

Also during this time, my pen and ink artwork was on display at Azusa Pacific University art gallery in Azusa, Ca. Whenever my artwork was displayed, I was asked if it was for sale. It was not originally my intention to execute art work for sale. I did it just for my pleasure and to improve my pen and ink style. I got the idea to have some prints made of the work, so I could keep my originals and others could have a copy for themselves.

I collaborated with John Greco of Josephine Press in Santa Monica to do a limited (50) run of hand pulled prints which would be signed and numbered.


Concurrently, I had the opportunity to speak at Biola University in La Habra, Ca. It was a great opportunity to share with those students what we were doing in animation over at Disney. 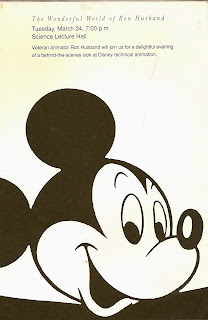 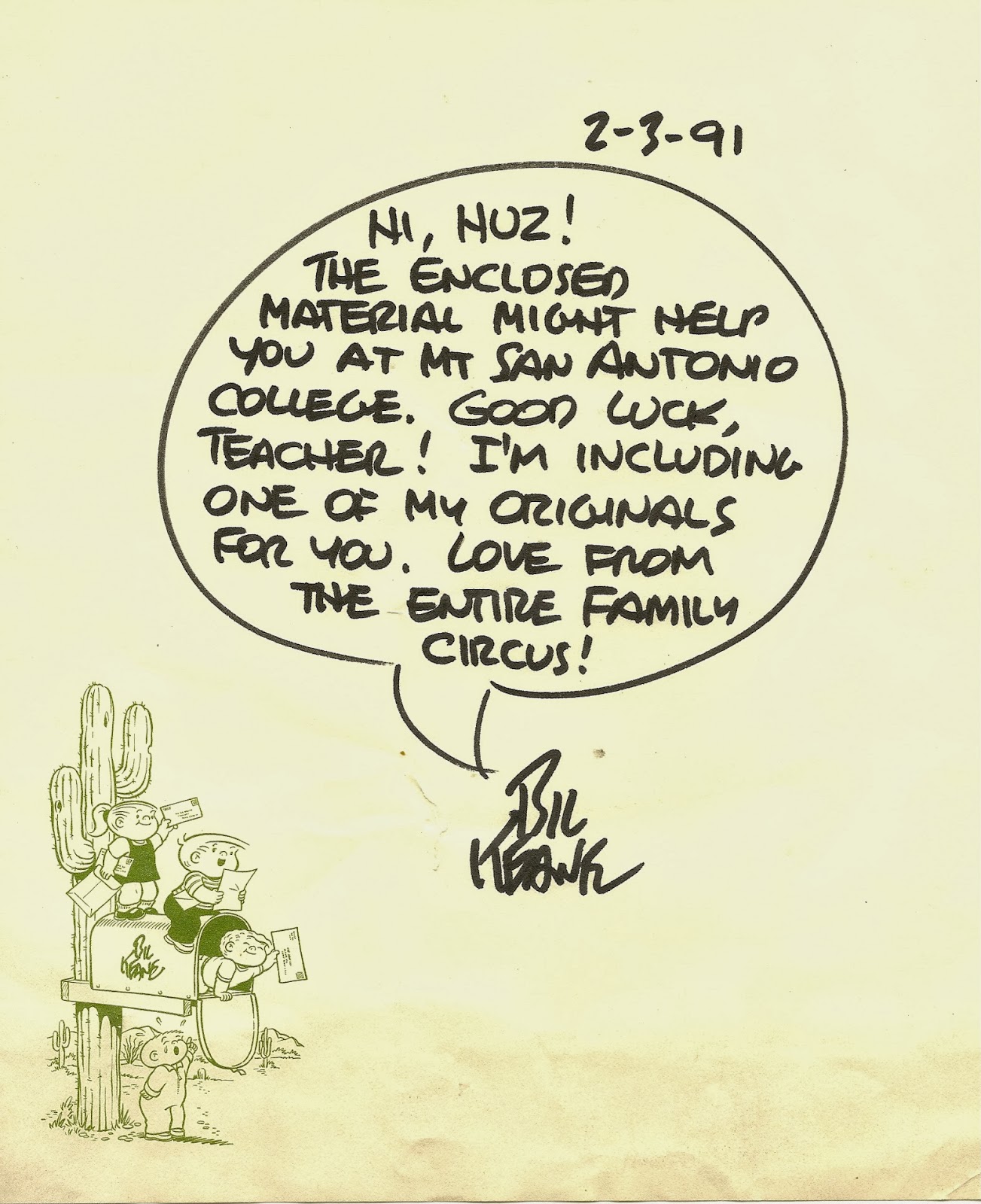 I enjoyed those teaching moments and when the opportunity came, I agreed to accept a teaching position at a local junior college. The class was  Cartooning and Humorous Illustration. This laid the foundation for me in years to come to teach other classes in figure drawing, quick sketch and animation. Also to lecture and conduct workshops.
.
I had been introduced to the late great, Mr.Bil Keane through his son Glen.  I wrote him asking his professional advice about cartooning and humorous illustration work. He kindly responded (right) with a wealth of other information and an original Family Circus panel.

Word of wisdom: Seek advice and direction from those in the occupation you wish to enter. The higher up the 'food chain' the better the advice. My advice came from the very top.

Congratulations to the Super Bowl champions Seattle Seahawks! And also to the Denver Broncos who happen to be the second best team in the NFL. I, like millions of people worldwide watched this spectacle with friends...old friends. 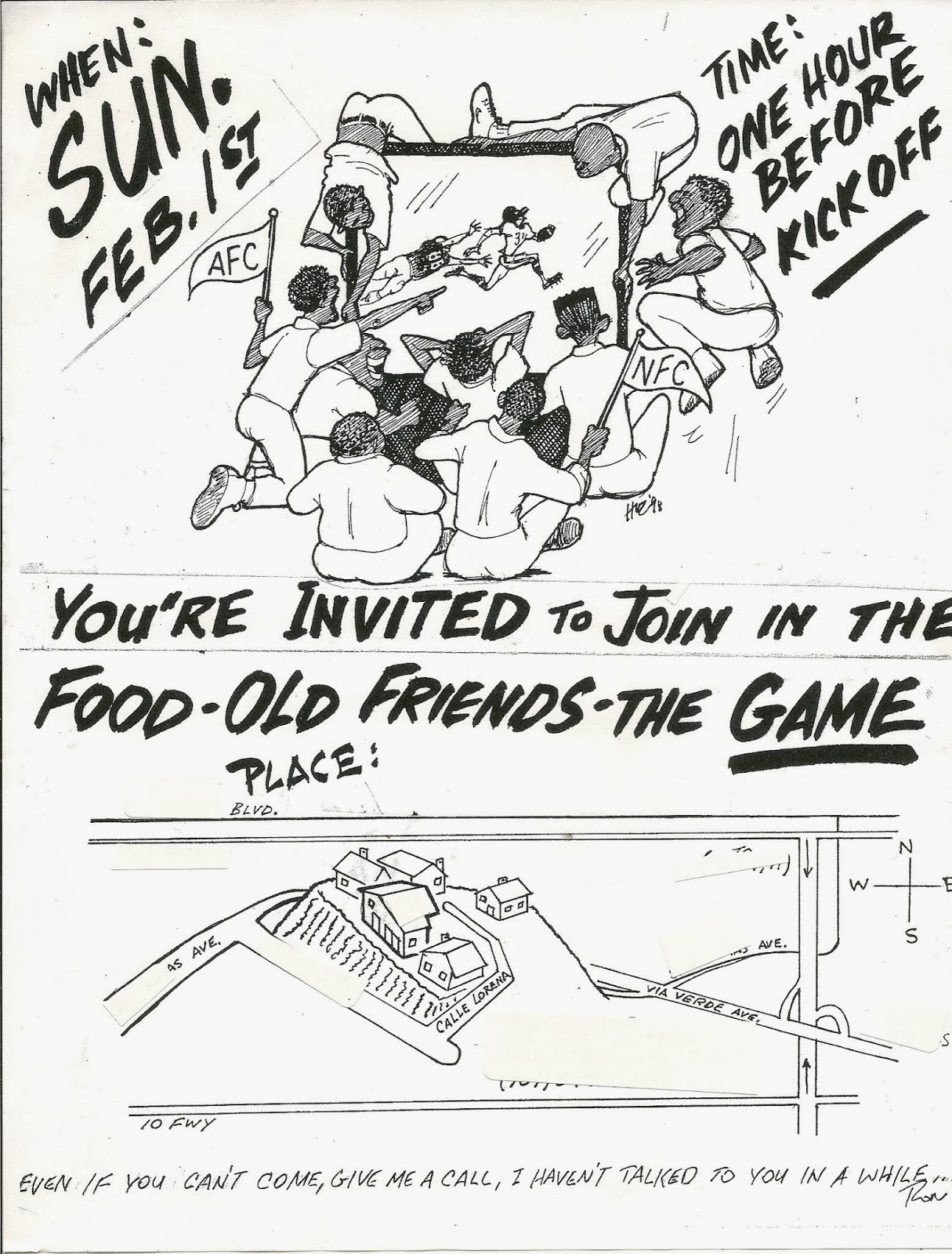 
I grew up in the small, southern California town of Monrovia. In 1950-60's era, the African-American community of my town extended only from the railroad tracks on Duarte Road twelve blocks north to Walnut St., and east-west four blocks from Shamrock Ave. to Ivy Ave. With such a small community of people, where literally everybody knew one another, close knit friendships were forged. Before I attended kindergarten I knew the neighbor kids. I went to elementary school with these same kids, played with them after school and had the chance to meet others youngsters from a few blocks away...On to junior and senior high, expanding the range of friends in the circle to an even larger group; which brings me to my point...

The Super Bowl has been a focus of gathering together for my friends from Monrovia and the adjoining city, Duarte. These guys I grew up with, played sports with, hung out with, partied with, laughed and joked with... and come to think of it, never fought with.

Usually we see old friends at funeral services or accidentally run into them and the conversation is mostly surface stuff. The thought of gathering together in a more relaxed atmosphere seemed more appealing to me.  So, a Super Bowl Gathering ensued at "Ron's Place". 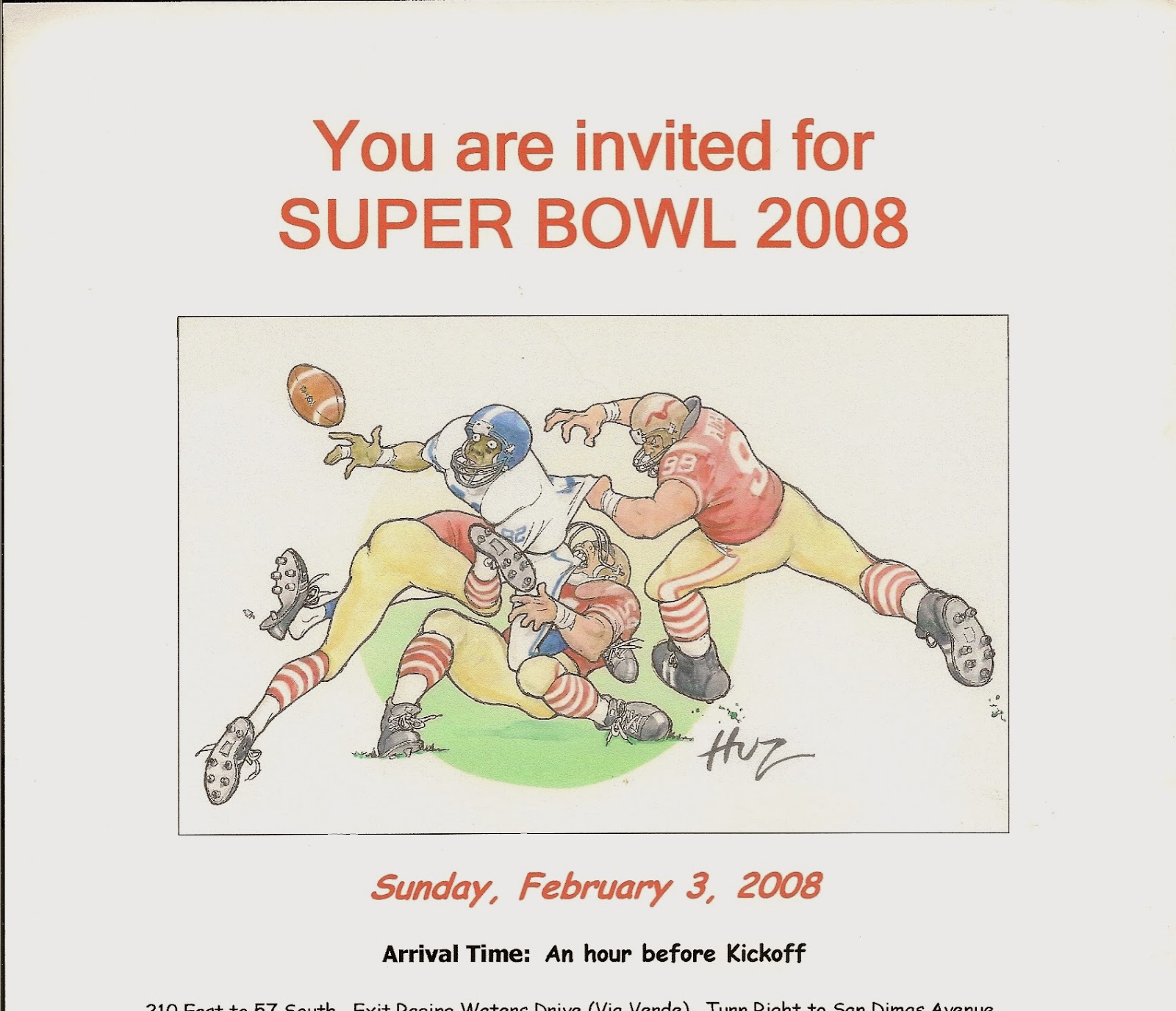 About twenty five years ago (or more) Jackie Adams,  who I had known since kindergarten, watched the USC-UCLA rivalry game at my house. We did so for several years. For some unknown reason we missed a game; I think Jackie had to work that day... To make up for missing the game that year, we got together a few months later at my place, to watch the Super Bowl. Meeting other old friends accidentally or at a funeral, I'd invited them to join us to watch the game. One by one the group grew. This once a year gathering of friends did not start out to be the tradition it has turned into, thus, I can not point to a specific start date; it just evolved over time.

These guys (all from Monrovia/Duarte, some, from as far back as pre-school) watching the game in my living room,  have careers in education, public utilities, law enforcement, entrepreneurship, corrections, and even an NFL coach. All with families and obligations, yet they take time once a year to come from near and far to see each other and catch up on each others lives.

At half time we form a circle, holding hands. The guys have an opportunity to express what is on their hearts. Thankfulness that we have another opportunity to fellowship with each other is the reigning sentiment.  We  thank God in prayer for another fruitful year to be together with old friends and blessing of the food. We often get a call during this time from one or two of the guys from the old neighborhood who now lives out of state. They too are sent an invitation and the phone is passed around to say 'hi'.

Like most of our gatherings, the third quarter of the game is missed as we chat and chew, catching up on each others lives and joking about old times. Often times, we'd laugh over  my old scrap books with pictures of us all in little league uniforms, or team pictures of our high school track, basketball, baseball and football teams. It is truly more about the fellowship than the game.

And, we don't take next year's gathering for granted. In 2004, a member of our group, Calvin Bourne, who I had known for 45 years passed away. The next year Charlie Graves passed and the following year Jackie Adams, both whom I had known fifty and fifty one years respectively. Three years in a row the group was shortened which makes each gathering truly special.

Call up a friend, send them an email or better yet a hand written letter and keep in touch with the friends you have.


(This years invitation below: 45 to 59 years of friendship here...The three on the stairs are Calvin, Charlie and Jackie) 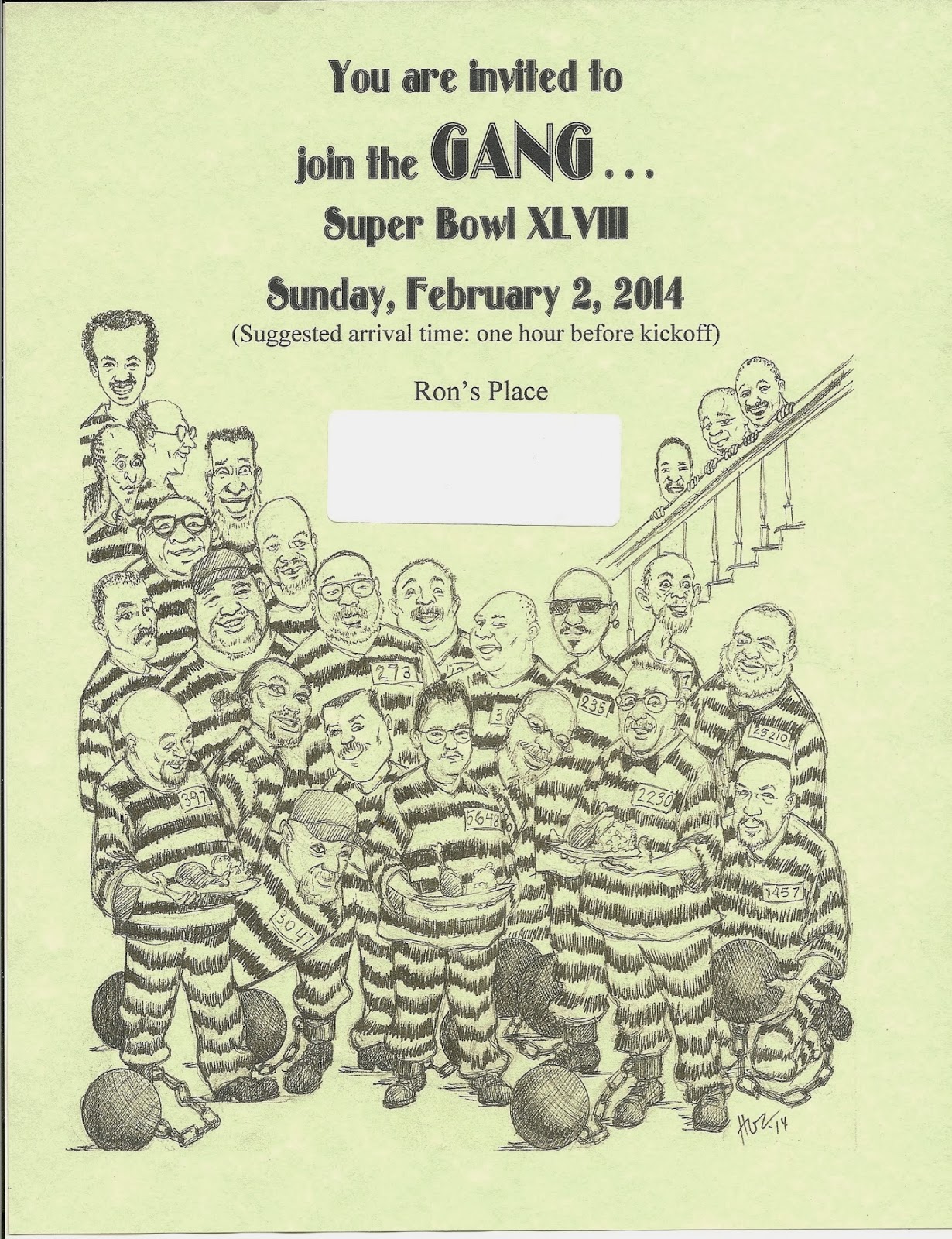