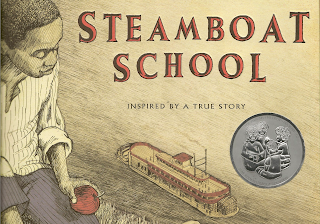 Though I was not able to attend the Jane Addams Awards Ceremony in NY, Heather Crowley of Disney Publishing sent these tokens of the occasion across the country to me in CA.

Along with an honorarium came these...

and this Certificate.
until next time...
Posted by Ron Husband at 11:45 AM 2 comments:

The ceremony will be held at their headquarters 777United Nations Plaza, 4th floor, New York, New York.  The event is free and open to the public and will end with a book signing and reception. 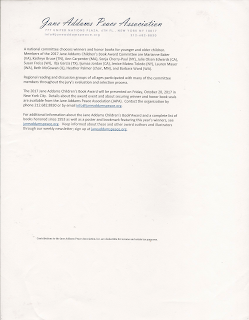 At 2:30 pm EST the committee members will announce each Awardee and Honoree who will be presented with a certificate, honorarium and 30 complementary book seals.

Unfortunately due to other commitments (teaching a class at that time) I will not be in attendance. Maria Elias, designer of Steamboat School, will accept the award on my behalf and read my acceptance speech.

"With gratitude and pride I accept the 2017 Jane Addams Children's Book Award for illustrating Steamboat School.


I want to thank the the Jane Addams Committee for recognizing Steamboat School out of the thousands of titles that went to press this past year.


I also want to thank those who made my association with Steamboat School possible and one of the memorable experiences in my life.
-Barbara Nelson who first introduced the project.
-Ken Shue and staff at Disney Publications Word Wide in California.
-Editors Tamson Weston and Rotem Moscovich of Disney/Hyperion Publications New York.
-Author Deborah Hopkinson whose word pictures were the inspiration for my illustrations.
-And my wife LaVonne for her continued love and support.

until next time...
Posted by Ron Husband at 4:38 PM No comments: