Thumbnails...
Like a broken record I keep mentioning thumbnails as a valuable step in the process of animation.
My drawing ability got me into the studio as an Animation Trainee but it is the thought process that would have to sustain me if I wanted to succeed in a career as an animator.
Thumbnails were a part of the learning process.
Along with my daily animation sessions with Disney Legend Eric Larson there were handouts to read and give thought to. Having no animation experience prior to coming to the Disney studio made everyday there a learning experience and soaking up as much knowledge as possible was a challenge and pleasure. These notes came from the masters of animation, who were in the building, on the floor below or in rooms right down the hall from me.

These notes were the thoughts of Disney Legend Milt Kahl on thumbnails... 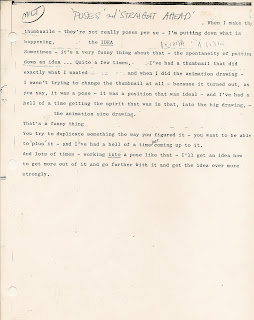 Thumbnails used on Atlantis...
One of the first lessons I was taught as an animation trainee was to spend half your time thinking about a scene and the other half animating the scene. These words of wisdom did not make much sense then, but in time their practicality would ring loud and clear.


Thinking about what you want to do is just as important as to what and how you do it.

What is the purpose of the scene, why is it in the happening at particular time?
Listening to the sound track (over and over) for any nuances, accented words, sound effects etc.
How much time do I have to get over the business?
Is the 'business' plain enough for the audience to 'get it?'
Can this pose be stronger?
Is this the proper camera angel to showcase what needs to be communicated?
These and many more questions have to be answered before animation starts.

Dr.Sweet as he passes by Milo who has a 'kink' in his neck. My first thoughts of how the action should play worked out in thumbnails. 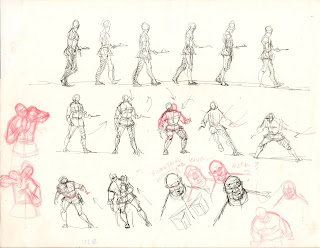 More detailed thumbnails provide a look at the fielding (in blue), staging and acting of the scene without wasting time animating actions which do not work properly in the field size.
These drawings are what I would show the directors for approval to start animating. 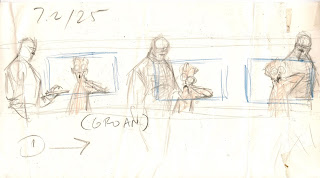 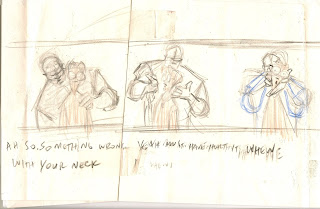 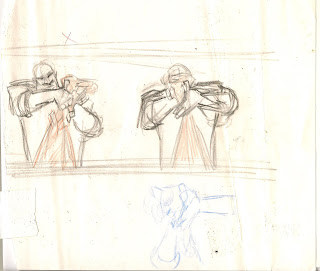 Dr. Sweet, without being asked and to Milo's surprise, adjusts his neck.

These early thumbnails (below) are from a scene towards the end of the picture.
This time Milo asks the Doctor for his neck to be adjusted, indicating bonding and trust has occurred in Atlantis.
Idea possibilities are worked out in the thumbnail stage.


The thumbs have given me a firm idea as to how the scene should play out. 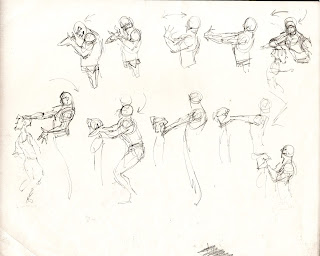 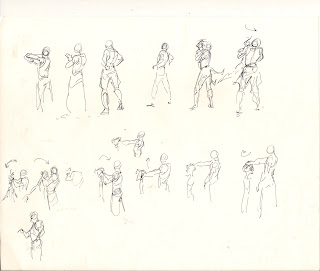 Thumbnails also help me visualize and map out field size (below in red) and character silhouette as the action takes place.

The  action-
Dr.Sweet hands on hips, rubbing hands together and cracking knuckles in eager anticipation of the action that is about to take place (2). He has to turn Milo's head around for the adjustment (3). 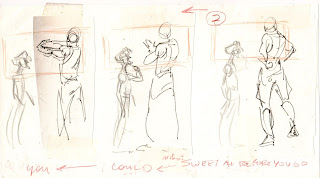 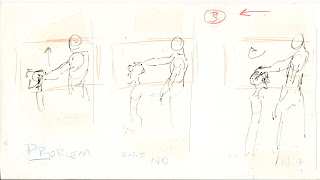 Milo's neck adjustment based on reality-
I was seeing a chiropractor during the making of Atlantis. He would work on the alignment of my lower back and spine by adjusting my neck. I asked him how he held his hands as the adjustment took place. 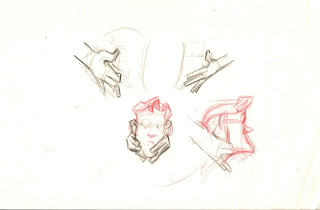 (In a handout dated 5-29-81 Eric Larson wrote this about reality..."All great characters have been the results of the successful caricature of reality and our knowledge and use of reality has been gained from an analysis and appreciation of that which we have observed, read about, been told about, discussed and perhaps even dreamed about. It is the sum total of all this that will make our linear characters entertaining and have meaningful, harmonic relationships with the audience.
True, we are reminded of these facts at every  turn, but we hear them, leave them with a mental note: Yeah, I know that! and promptly go about our work not putting them to use.")

P.S.
In my last post February was singled out as a very busy month for me. I posted before a few of the events took place...

Feb. 18th...
reading of Steamboat School at the Monrovia Library... 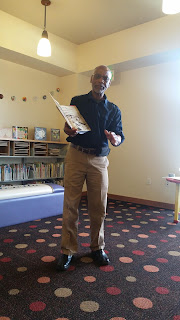 
Feb. 25th...
One of three speakers at the Monrovia/Duarte Black Alumni Scholarship Luncheon... 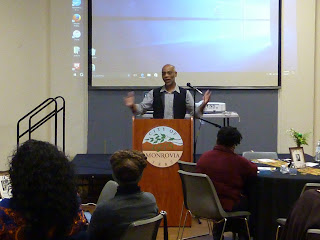 Fortunately it was a short month:- )