The road to Steamboat School...

My last assignment before retirement from Disney Publications Worldwide was to illustrate the story "Steamboat School."

Published in New York, Steamboat School is an imprint of Disney Hyperion.

Beautifully written by award winning author, Deborah Hopkinson, this book is based on the true events of Reverend John Berry Meachum (1789-1854).  Born a slave, he bought his freedom and that of his wife, relatives and others.  An educator, he taught school until a law was enacted forbidding African-Americans to be educated in the state of Missouri.


It was my great honor to be able to illustrate this story.

Here's a sneak peak at the Cover! 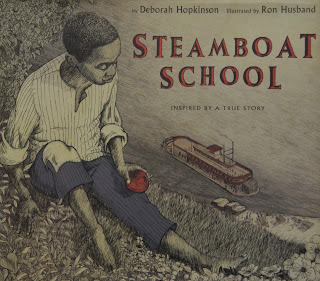 "Sometime courage is an ordinary boy."


Meachum built a steamboat and moored it in the Mississippi River in order to continue teaching his students. The river, being federal property was not subject to state laws and no laws were broken.

Deborah and I teamed together to bring this much needed piece of history to life.

Steamboat School will be in print and available summer 2016.

Presently it can be pre-ordered on Amazon here:  Steamboat School

And already it is garnering attention!

Steamboat School has been named a Junior Library Guild selection for 2016.

What does it mean to be a Junior Library Guild (JLG) selection?

(information from the JLG website based on U.S. statistics)

I don't know what the future holds for Steamboat School, but it is headed in the right direction.

Illustration...
I have been aware of my drawing talent for sixty one of the 65 years of my sojourn on planet earth. Yet, my early years posed a mystery as to how I was going to parlay this talent into a career. In my youth I painted signs and life sized posters, taught myself how to use an airbrush and even did custom car painting (pearl, lace, candy apple etc.) among other artistic endeavors. Not really looking for a means of employment, I just loved the creativity of it all.

After high school and into junior college, more serious thought was given to how my future was going to unfold artistically.  Drafting and technical illustration was a part of my curriculum and added serious thought toward a career path. The information gained through these classes would prove valuable in my understanding of layout in animation.

Medical Illustration also seemed interesting as a career option.  However, a course in kinesiology proved too technical for me. Yet the experience of that class would also prove valuable later on in my journey in animation as it helped in my understanding of action analysis.

An athletic scholarship to the University of Nevada, Las Vegas broadened my horizons not only athletically but artistically. I was exposed to more drawing and painting, stretching my own canvas, ceramics, modeling and photography. I finally settled in on concentrating on becoming a commercial artist.

At every step of my art journey, from elementary, junior high, high school, college and now university, my talent in art had been and continued to be recognized. I realized early on that my competition was not my fellow students in the class room but the people who were already making a living at what I wanted to do.

A fair amount of my time was spent in the magazine section of  the UNLV library looking at the illustrations. Great illustrators of the 60's-70's era caught my eye. Robert Riger, Norman Rockwell, LeRoy Neiman, Bob Peak, Bernie Fuchs to name a few.

Gag cartoons in the Saturday Evening Post and New Yorker laid the ground work for how best to put over a gag in animation.  Playboy magazine too played a part. Once you get by the centerfold, they published some entertaining 'gag cartoons'. The staging and drawing ability of Dedini, Roth, Wilson and others would tribute to my story telling ability in animation.

After graduation I headed home to Southern California. There were no jobs for a  commercial artists in CA, especially a novice seeking his first job. Chicago and New York, where there is a lot of publishing,  would have been the ideal places to go but I had a wife two toddlers to think about.
So, I took employment as a draftsman. That job lasted exactly one week. I had multiple job applications out and Honeywell Inc. called and offered me a position in their technical illustration department. Friday  I said "good bye" to drafting and Monday "hello" to technical illustration.  I thought Technical illustration would be a step closer to my goals.

The reality was that in the department of about six of us, one guy, Pat Person by name, got to do all the neat stuff. Exploded views, art work etc. The rest of us did block diagrams and flow charts. I did this about a year and a half before I branched out to do something more creative. Earlier blogs go into the details which led me to a thirty eight year career with the Walt Disney Co.

Around the mid 1980's, while working at Disney Feature Animation, a fellow animator, Ruben Aquino, brought in to work a home work assignment he was working on. Impressed with his work I asked about the class he was taking. Children's Storybook Illustration was the class, offered at night by Art Center College of Design located in Pasadena. I signed up for the next semester of this class.

I took the information gleaned from the class and pursued an interest I had back in my college days, book and magazine illustration. I submitted some samples of my work to publishers. I soon found out there is no easy path to a commercial art career. Fortunately I had a 'day job', so I could afford to be patient. 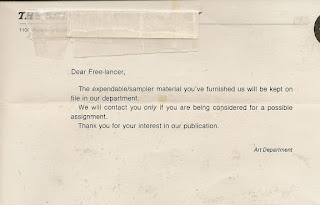 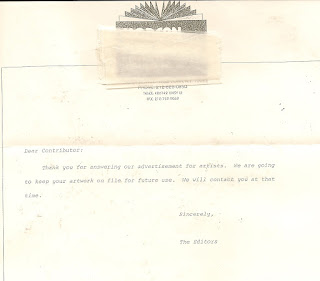 After about two years or more of rejection letters I got my first assignment.

Over the years I got other assignments. Below is a sampling of some of the projects I worked on... 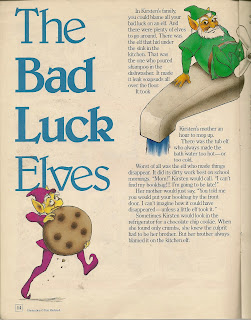 Over the years, animation, other priorities and projects took me down other paths.
Almost 40 years in a different direction, my goal to illustrate books and magazines seems to be back on course.