The animation department had outgrown the 'hat' building  and the overflow of production people expanded to a building a few miles north. The departments were referred to as Feature Animation Northside and Southside. 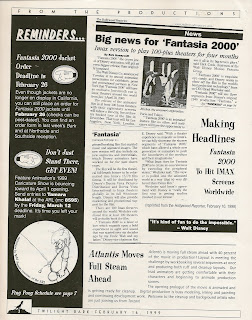 Early in 1999 the Twilight Bark previewed the upcoming release of Fantasia 2000 and gave a plug to Atlantis which would be gearing up next...


Below are some of my thumbnails from Fantasia 2000-  the action of the Elk offering the Sprite (animated by Tony DeRosa) a ride on his antlers... 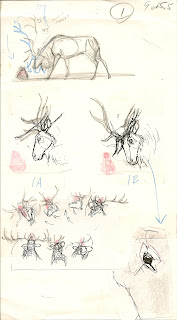 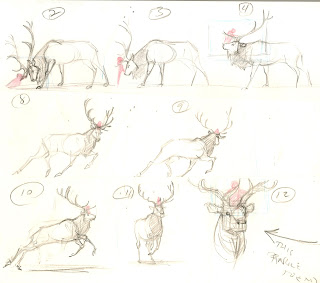 more thumbnails of the Elk galloping with Sprite atop his antlers... 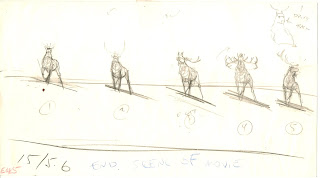 ...and thumbnails of the final scene as the Elk watches 'effects' fall from the sky.


The next leg of the journey...

With the Elk animation completed, it was time to look into what what other production I could attach myself to.

A few days elapse and I get a call from Hendel Butoy, director of  "Piano Concerto No.2, Allegro, Opus 102" sequence of Fantasia 2000...The story is based on "The Steadfast Tin Soldier".

The principal animation (mostly CGI) had been completed.  There is a short sequence where the toy boat is floating down a sewer and is attacked by...rats.

"Ron, we want you to animate the rats", was Hendel's request.
.

Research...One of my favorite aspects of animation.

As usual I do my research on my subject prior to any animation. My inquiry was not about the cute little white lab or the pet rats they sell at the pet store...

Sewer rats- the kind that make you cringe when you see the damage they do and what they have left behind in their nocturnal rampages.The ones you set traps for. 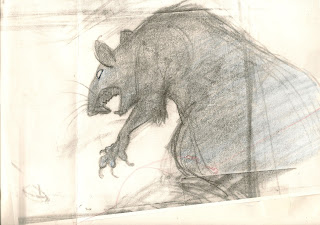 No 'hands on or visual interaction' this time.  Not writing a thesis on the pests or being an exterminator, I gleaned more than I needed to know through National Geographic and other magazine articles. I learned enough information to add to my knowledge bank and make my animation believable.

Fantasia 2000 completed and finally 'in the can' as the old expression used to go. Film used to come in rolls  housed in round metal containers which were shipped to movie theaters to be projected onto a screen. Today it's all digital, no more cans of film. Am I old or what!...:-)

Time to celebrate our latest accomplishment.

I was one of the fortunate to attend the New Years Eve program of Fantasia 2000, which was accompanied by a live orchestra playing the classical musical numbers... 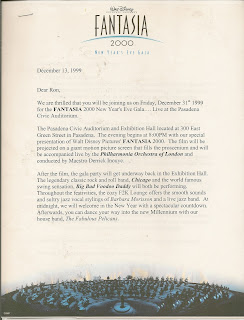 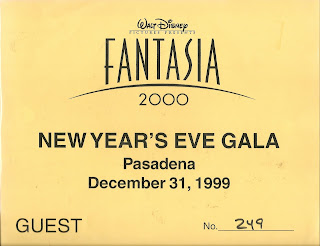 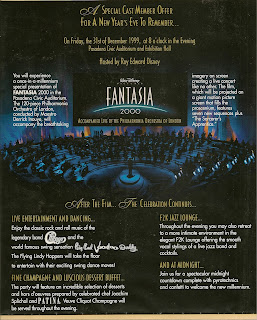 My 1999 ended on a Fantasia musical note and the year 2000 began with a Fantasia 2000 Shopping Experience (below) for the employees:-) 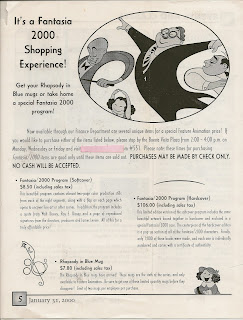