Finding a home in Fantasia...part six

I captured directors Paul (seated left) and brother Gaetan Brizzi (at the board) going over story board sketches as we start the animation phase of our project.


Before we get to the 'clean-up' version of the Elk, I have a lot of preliminary work to do...

One last request before animation... 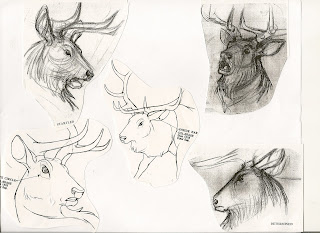 Though the Elk did all his acting through the eyes and body language, the producer wanted to see what facial emotions would look like on this non-verbal animal. These are some of the concepts I came up with. Three are rough and two cleaned-up versions of my rough drawings.

All animators are not alike...

After being handed a scene by the director some jump right in and start animating...trial and error until they get it right. Some can get it right with the first attempt (I was never that type:-)
I've seen others lounge around 'shooting the breeze' and 'just laying back' until the last minute and frantically get it done...and on time!
Ask a hundred different animators what their approach to animating a scene is and you'll get a 100 different answers.

My approach...which is not unique to me, is one gleaned from a number of animators I have had the privilege of working with and observing over the years:

The thought process...
Thinking a scene through and playing it over and over in my head is the start. This 'thought process' was drummed into my head by my first animation teacher Eric Larsen, who headed the trainee department when I started at Disney in 1975. Eric was speaking to a blank sheet (mind) as I had no knowledge of animation and had not formed any work habits.  He told me (and others) "the only limitations an animator has is his imagination and his ability to draw what he imagines".

Thumbnails...
Another valuable lesson Eric introduced me to was the use of 'thumbnail' sketches. These little sketches are invaluable in working out the action, seeing how a character 'reads' in a certain pose, how that character looks in the field size and many, many more potential drawing problems can be worked out in the thumbnail stage.

At this point the director(s) can make any suggestions and or comments pertaining to the scene. With the director's approval I can begin animating with the confidence, knowing at this early stage, I have their approval.

The directors also know they will not be met with any surprises the next time they view the scene. This keeps me from throwing in something we did not discuss and them not expecting something different than what was shown them.

The value of thumbnails...
The first time the Elk is seen, he is walking through the snow in the forest.
The walk is based on this series of thumb nail sketches (below right). The numbers are for rough timing. On drawing #1 he will be in this pose, drawing #9 he will be in this pose etc. Drawings 2-8 will be inbetweened and so on to the end of the scenes length. For now 1-9-17-25-33-41-49-57-65 are my key poses. As the scene progresses these drawings may be refined/finessed.

I will re-draw these poses on animation paper and expose them on camera to see if they are moving at the right speed and make any adjustments in timing at this point. This is done to avoid wasting time having a scene drawn and inbetweened before knowing for sure that it is working.


Observation in the snow...

My trip to the Elk farm in Montana is about to pay a subtle dividend. I noticed how the hoof when entering the snow kicked up a little mound of snow as it went from a bend at the fetlock joint (below) #1 to straightening out to take the weight of the body.

This little action in the snow would not 'make or break' the scene but would add a realistic touch that in nature really happens. Thumb nails helped me work out this action.

Add to the mix an incline...
The same walking action with adjustments made to compensate for the down hill movement. Like walking down a hill, the body leans slightly backward to maintain balance.

Elk walking down and away (below) second row-series of 3 drawings where it says 'start'-moving right to left, horizontally),  Elk stops and looks across the lake at the opening of the cave he will enter (right top drawing-moving vertically) slight hesitation before he enters the water. (Wouldn't you hesitate before entering a freezing lake or any water for that mater:-).

Crossing the lake...
(Below right) Though you will not see his submerged torso you have to feel he is walking on the shallow bottom of the lake. This is accomplished by animating the whole body (below-top series of 4 drawings moving right to left).

The Special Effects department will animate the water.
This is the only scene in which I animated the antlers (more on that later).

(above left)  Thumb nails drawn to work out the mouth action as the Elk exhales his breath.


Inside the cave...
Moving forward (above right - middle series of 4 drawings - moving left to right) the Elk looks around.

A nice touch the effects department added was the cold air coming from the Elks nostrils and mouth as he blows (middle row-drawing on far right) on the hanging ice to initiate the action of the Sprite animated by Tony DeRosa.
One department adding a plus to an other's work.

As you can see these thumb nails were done in my sketch book. There are other drawings on the page that have nothing to do with the scene. Whenever the thought hits day or night I jot down whatever will give me insight as I plan the scene out in my mind and eventually on paper before animating.

Back from paying a visit to Hawaii to visit my daughter and her family, I was greeted with a surprise. A package had been delivered and in it was a Japanese translation of my book 'Quick Sketching with Ron Husband'.

My editor at the time David Bevans, told me about a year ago that a foreign publisher had negotiated to publish the book and that I would possibly be contacted in case any translation or other issues arose. Never contacted, I had not expected to see a finished product so soon as it will not be available to that market until June 2016.

David also told me it is unusual for a book to be picked up internationally having been in publication less than a year. At the time QS had been in release for about eight months. About a month later I was given the same information, this time it involved a Chinese publisher also with a summer 2016 release date.  I am anticipating an advance copy of that coming in the near future too.
Having never been to Asia, I will have covered it in book form:-)