Finding a home in Fantasia...part three

At Clifton Jr. High, art was starting to be a part of my identity. I joined the art club and got to draw cartoons for the sport page in the Cliftonian, the school yearbook. 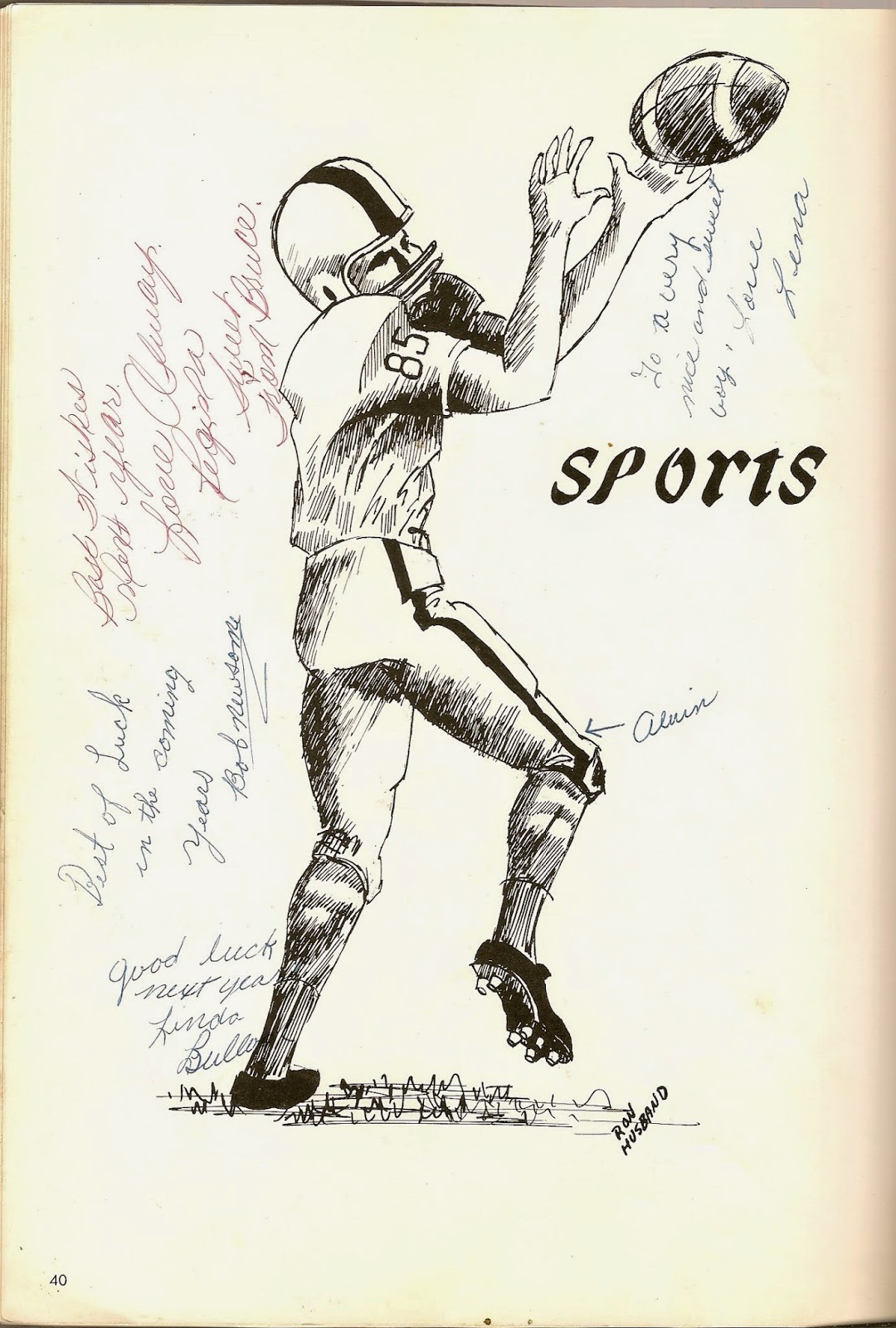 I played on the flag football team. We played for the district championship in the Pee Wee division.
A picture was taken of the team after the game.

From the look on our faces, you can see we lost the game.  My  frown is not because we lost the game, the sour expression is because I did not play. Not one minute. Wasn't late, didn't miss practice, not a discipline problem...just not good enough.

Like my desire to play little league baseball years before, my goal was to play football in high school. How could I play tackle football at the high school level if I could not even compete in flag football in Jr. High?

I determined or it was determined for me by coach Wilbur Brown, that I did not possess the skills to play football. I needed a plan to get stronger and faster.
My little mind went to work formulating a strategy.
Like a mad scientist, I documented these steps in a 3"x 4 1/2" memo pad what I must do.

On the pages I outlined a regimen of jogging around the block,  jumping jacks and stretching a bicycle inner tube (in place of weights/barbells). On the seven pages I drew pictures of the exercises to be done and signed it, binding me to my own pact. 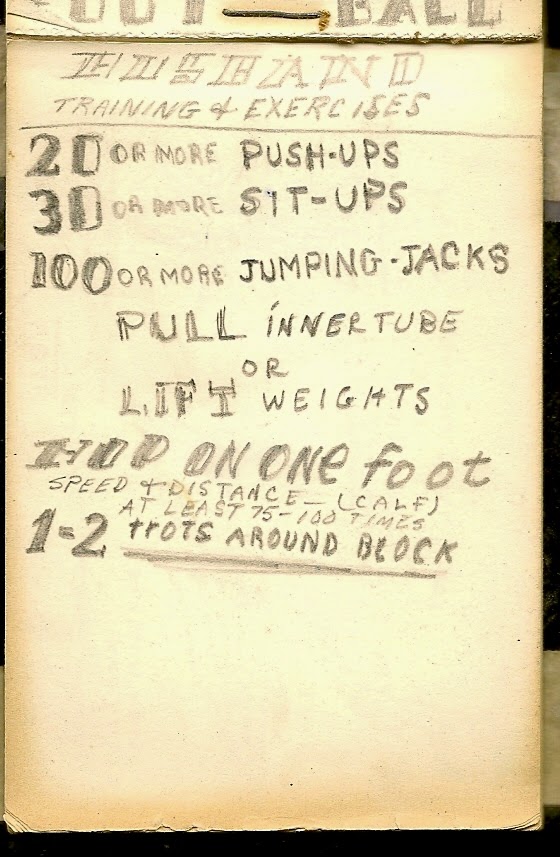 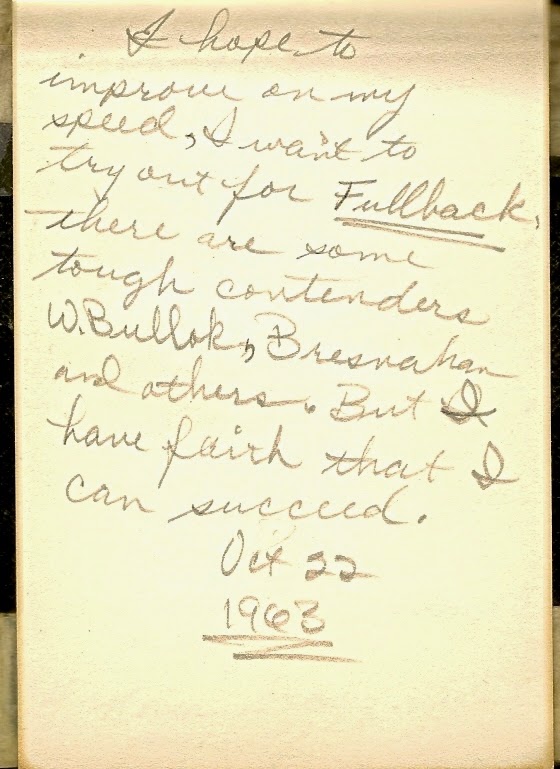 I faithfully followed this routine.

In high school a weight room took the place of an inner tube and joining the track team helped me be a faster runner. 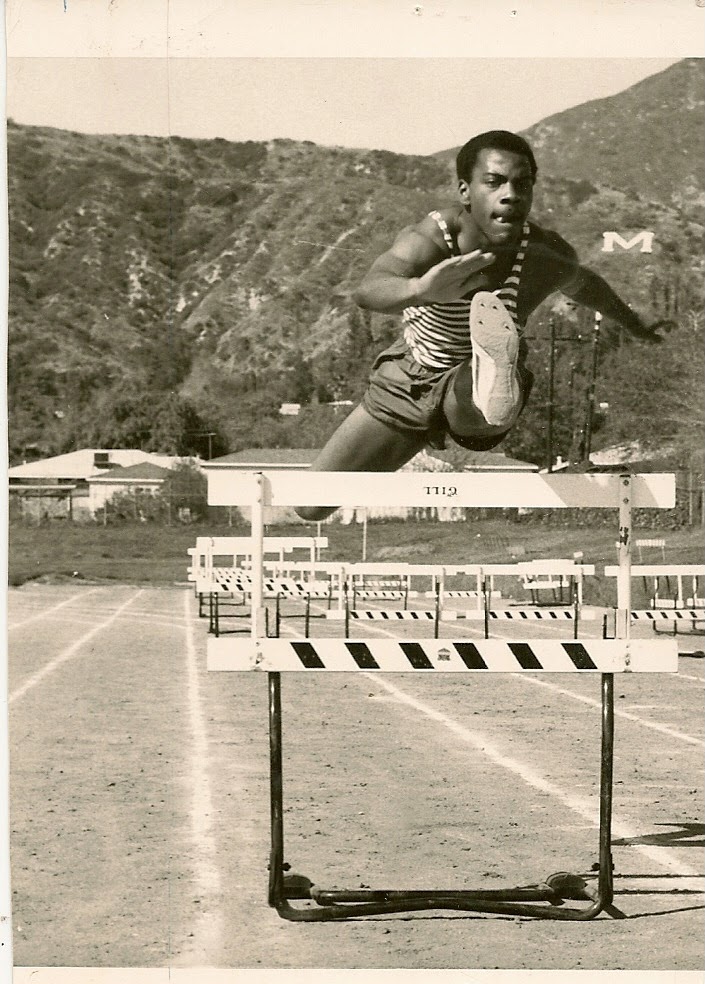 I've always liked this photo, it has the big "M" over my left shoulder. The symbol of my hometown, Monrovia CA, the Gem of the Foothills.

Running hurdles gave me my first introduction to one of the building blocks of my career in  animation.

Coach Dink Walker explained to me the difference between jumping over a hurdle and mechanics of hurdling. Being only 5'-9" it was important that I have proper form going over the hurdles.

On the dirt track the coach had me to sweep in front of each hurdle with a broom. Then...
'Boom' went his practice pistol as I whizzed over the obstacles.

In the dirt were my footprints. He pointed out my big toe. It was pointed at a 45 degree angle towards the sideline. If the toe is going in that direction, the body is also. Both should be pointed straight toward the finish line. Between each hurdle the body would have to compensate and get back to running straight down the track. Each time that happened, fractions of a second were added to the final time.

I would learn years later this study of the body in motion would be an important link in animation known as action analysis and the subject of one of the chapters in my book, Quick Sketching with Ron Husband.  http://www.amazon.com/gp/product/041582334X/ref=s9_simh_se_p14_d10_i1?pf_rd_m=ATVPDKIKX0DER&pf_rd_s=auto-no-results-center-1&pf_rd_r=0NFG4DBD32V5VAJMEETD&pf_rd_t=301&pf_rd_p=1263465782&pf_rd_i=quicksketchron

My senior season ('67) at Monrovia High I was co-captain of the team... 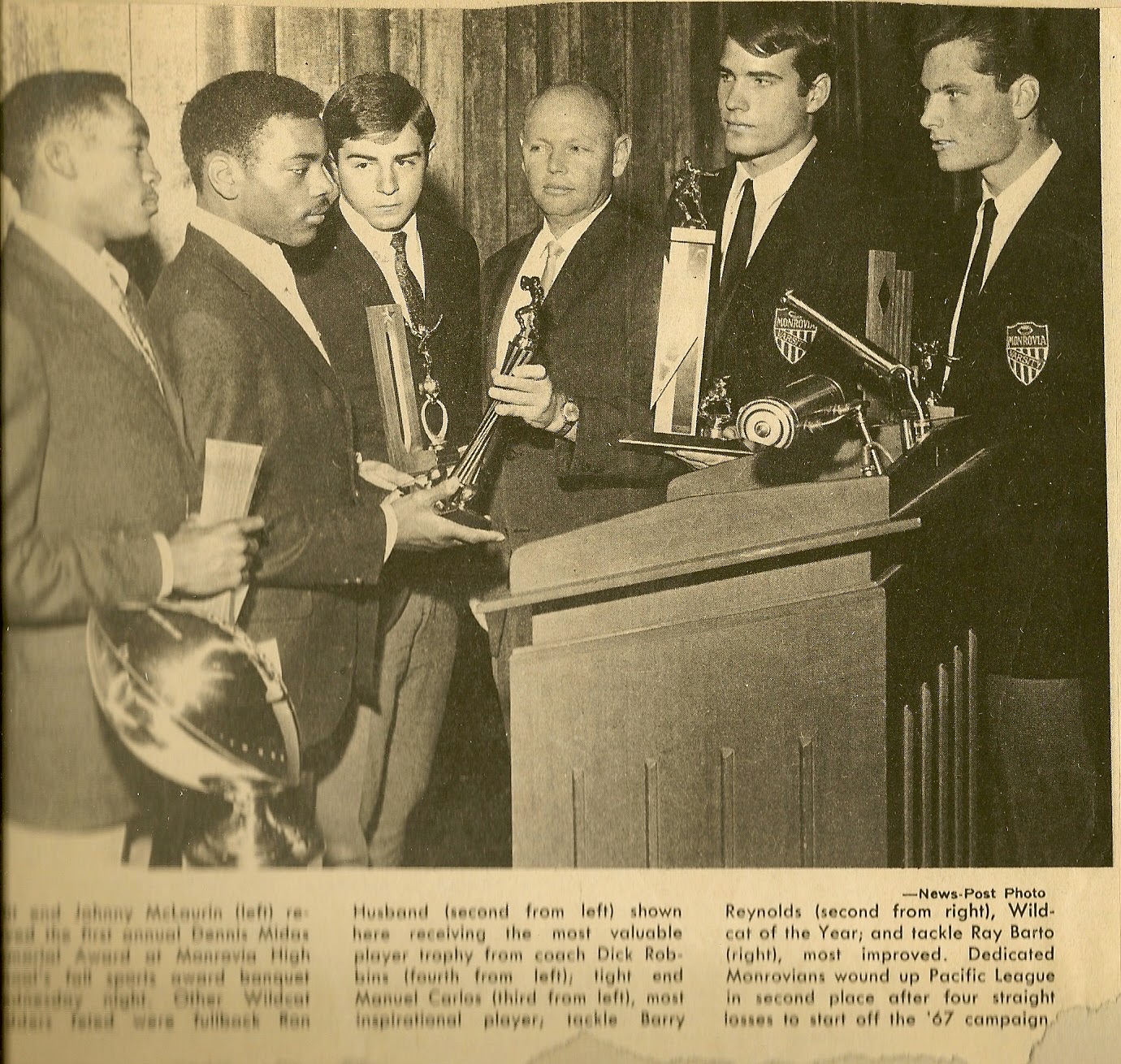 Then, Most Valuable Player, All-League and I made the San Gabriel Valley All-star team.

I had had a plan for athletics, but none for my talent in art.

In high school...
Art had been an on and off affair for me.

Like most budding artists I doodled on my homework assignments. 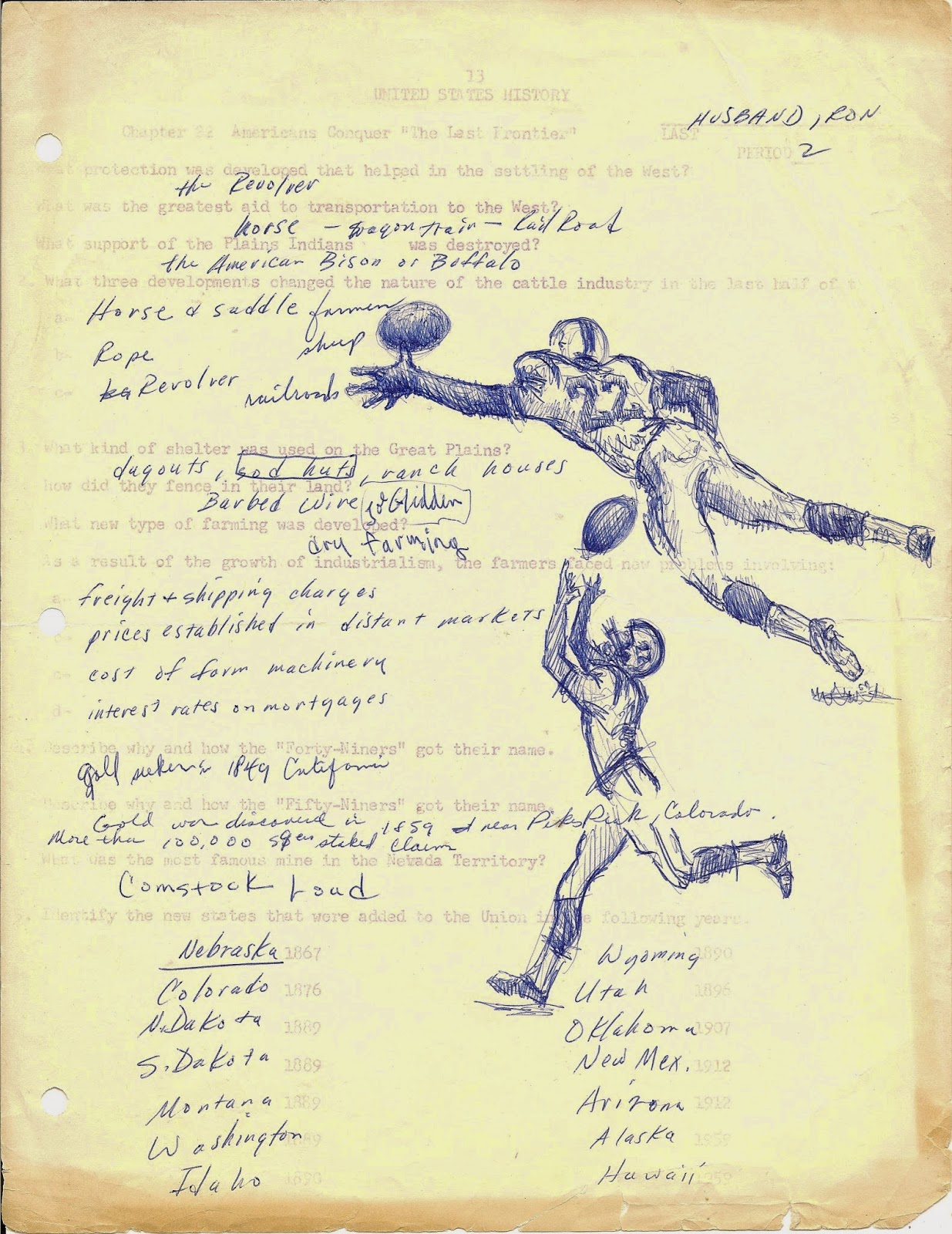 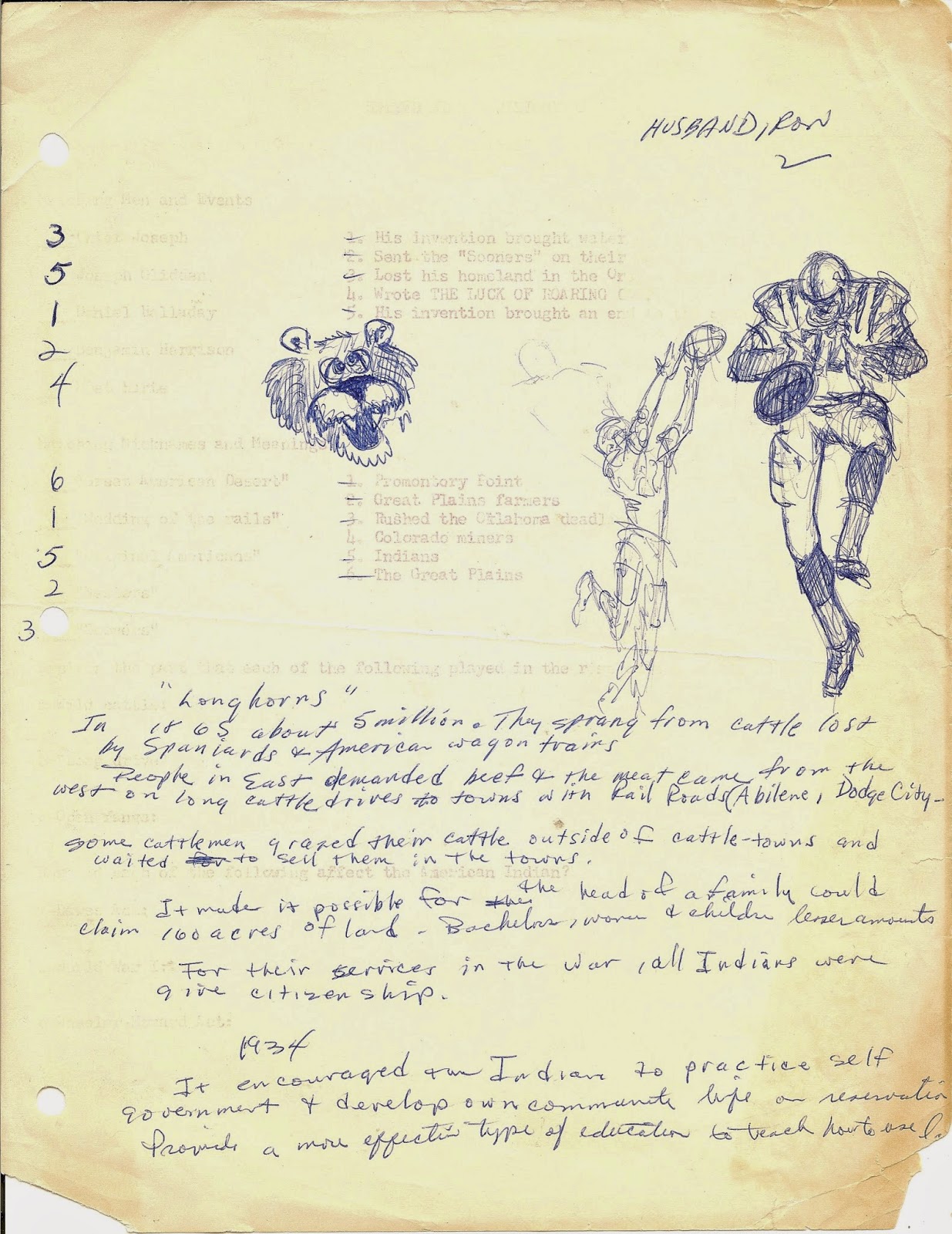 My artistic talent came so naturally for me that I took it for granted, not appreciating nor utilizing it.
I did not take art as a freshman. My sophomore year the teacher let me take the second year class, though I was supposed to take the freshman class.

All the students took turns modeling for the others to draw.
Too long a story to tell but half way through my junior year I was kicked out of art class (deservedly).

Prior to being kicked out of the class, a pen and ink piece of mine was entered in the Scholastic Art Awards project sponsored by Scholastic Magazine.

150,000 entries were narrowed down to 7,500 regional finalists and sent to New York for national judging. I was one of 412 award winners. The award came to the school and a publicity photo was taken by the local paper, The Daily News Post , of me, principal Leonard Morris and art teacher Ms. Dorothy Clemmons silently smiling.  I say silently because she never spoke to me after booting me out of her art class and this occasion was no exception.

I did not take art my senior year- all art classes were taught by Ms Clemmons...and she was through with me:-)

Yet, that year and a half in Ms Clemmons art classes were to have a monumental effect on the rest of my life. She encouraged her students to carry a sketch book and chronicle their experiences in pen/pencil. I have no idea how many took up her challenge, but I sure did.

I had been drawing sporadically in sketch books long before this time (today I have sketch books dated 1962). Her challenge was to sketch constantly. Fill one up with sketches and immediately start on another. How else are you going to sharpen your talent as an artist?

This habit picked up in a high school art class has made me a better artist. Sharpening my skills in observing and capturing the actions of both human and animals in motion. It has enhanced my illustration work by bringing a feel of movement and design to the projects.

I was hired by the Walt Disney Studios Feature Animation department not because I knew anything about animation, but because I understood movement and could capture those actions on paper. My initial interview with the studio consisted of presenting a portfolio of finished art samples. They  wanted to see 'quick sketches' of which I had many filled books by this time. Seeing my sketches, I was hired which led to a thirty eight year career with the studio.

This passion of mine also served as the genesis of a book about what to look for in subject matter and how to sketch with a purpose.  Though she no longer lives, Ms. Dorothy Clemmon's memory influences each page of my sketch books.


On the bus home from the last football game of the season I remember thinking, "this would be the last time I would have a football uniform on".

I had dreams of going to an art school but no plan on how to get there.

Stay with me, I'm still trying to explain how I got on the cover of the UNLV Magazine:-)