Finding a home in Fantasia...


May 1996...
After animating on Hunchback and prior to Hercules, my curiosity got the best of me and I trained in CGI in preparation to animate on the then called Dinosaur Project (released as Dinosaur). Thoroughly enjoyed the training experience, but after about six months I missed 'pushing a pencil' . After a conversation with director Eric Leighton in which I explained how much I missed drawing on a daily basis, I left the project.

During this time I continued being a spokesman for Disney animation. My first opportunity to do this came while animating on The Black Cauldron. I spoke to an elementary school for their career day in Victorville, CA. As 'Guest Speaker' I would get many more chances to talk about my passion and love for this art form. These speaking engagements would help hone my skill and quiet my nervousness in years to come:-)

Attached to no production I wandered aimlessly around the studio in search of a project to latch on to.  Hercules, in need of animators to complete the feature brought me on board.

The animators who worked on Hercules started off the year with an appreciation luncheon in celebration of  the features' run in the theaters the past few months. 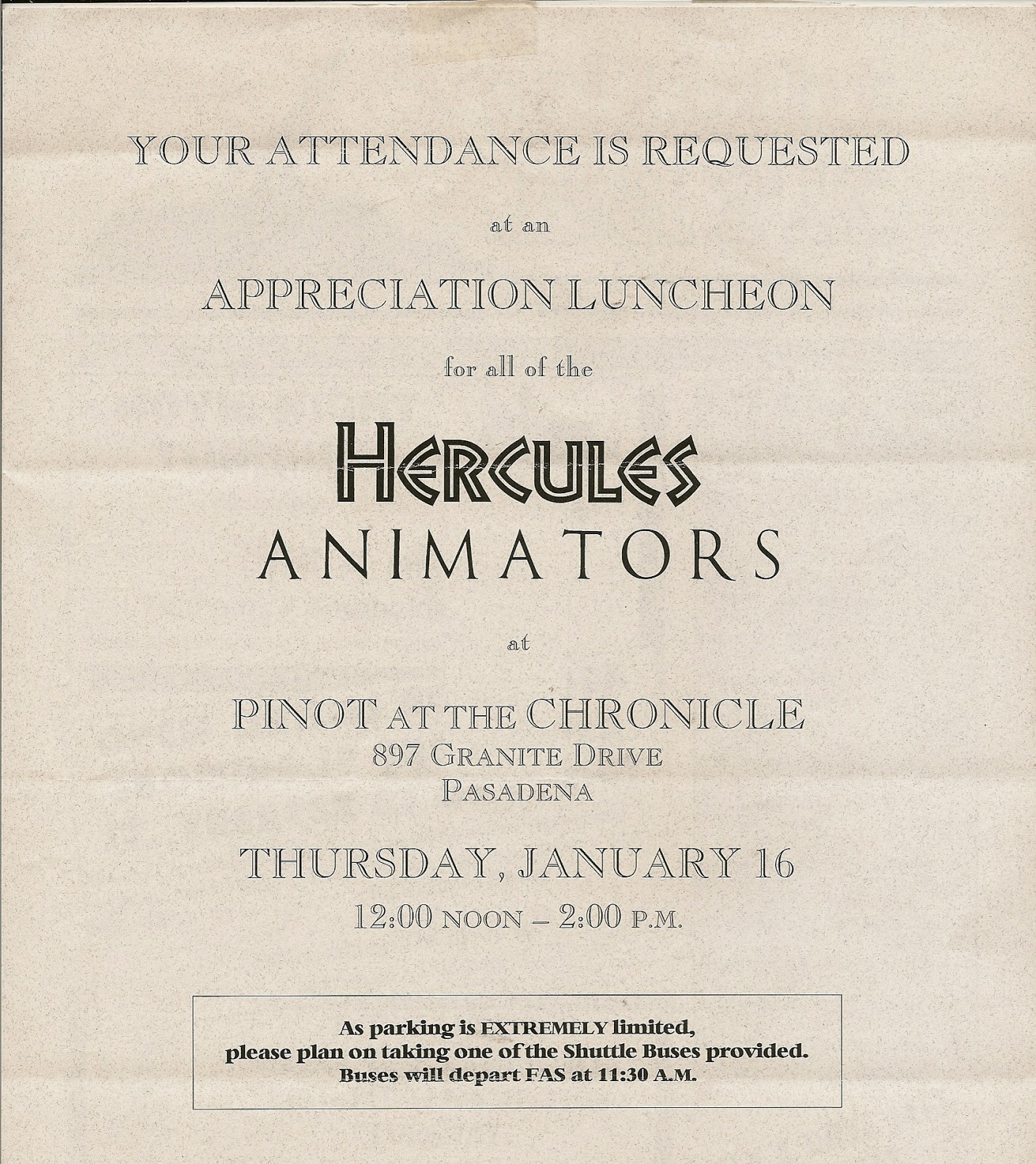 After my brief venture into and out of the world of CGI and the short stint animating on Hercules, I was once again without a production home. Wandering through the hallway of one of the many buildings Disney occupied on Flower St. in Glendale and looking at storyboards of the then called "Fantasia 99", Paul Brizzi walked by.We engaged in a conversation about the boards. The storyboards outlined Stravinsky's Firebird Suite which Paul and his twin brother Gaetan were preparing to usher into production as directors of this segment of the newly revised Fantasia.

Fantasia...
Released in 1940, this piece married classical music with animation. The original intention was to take out a piece and replace it with another musical number every few years. By this time there should have been all new segments in place. Things did not go as planned as other studio priorities came to the front of the line. But, now it was time.

Paul walked me through the story boards and my interest peaked. John Pomeroy was to animate the Firebird and Tony DeRosa the Sprite; the only other character was the Elk. I wanted to animate the Elk and voiced my desire. Paul wanted to see what I could do with a four footed character before he would consider me animating on this ungulate. I dropped off my reel of Djali tests done for The Hunchback of  Notre Dame for the brothers to look at. A few days later I got a call welcoming me on board. I found a home:-) 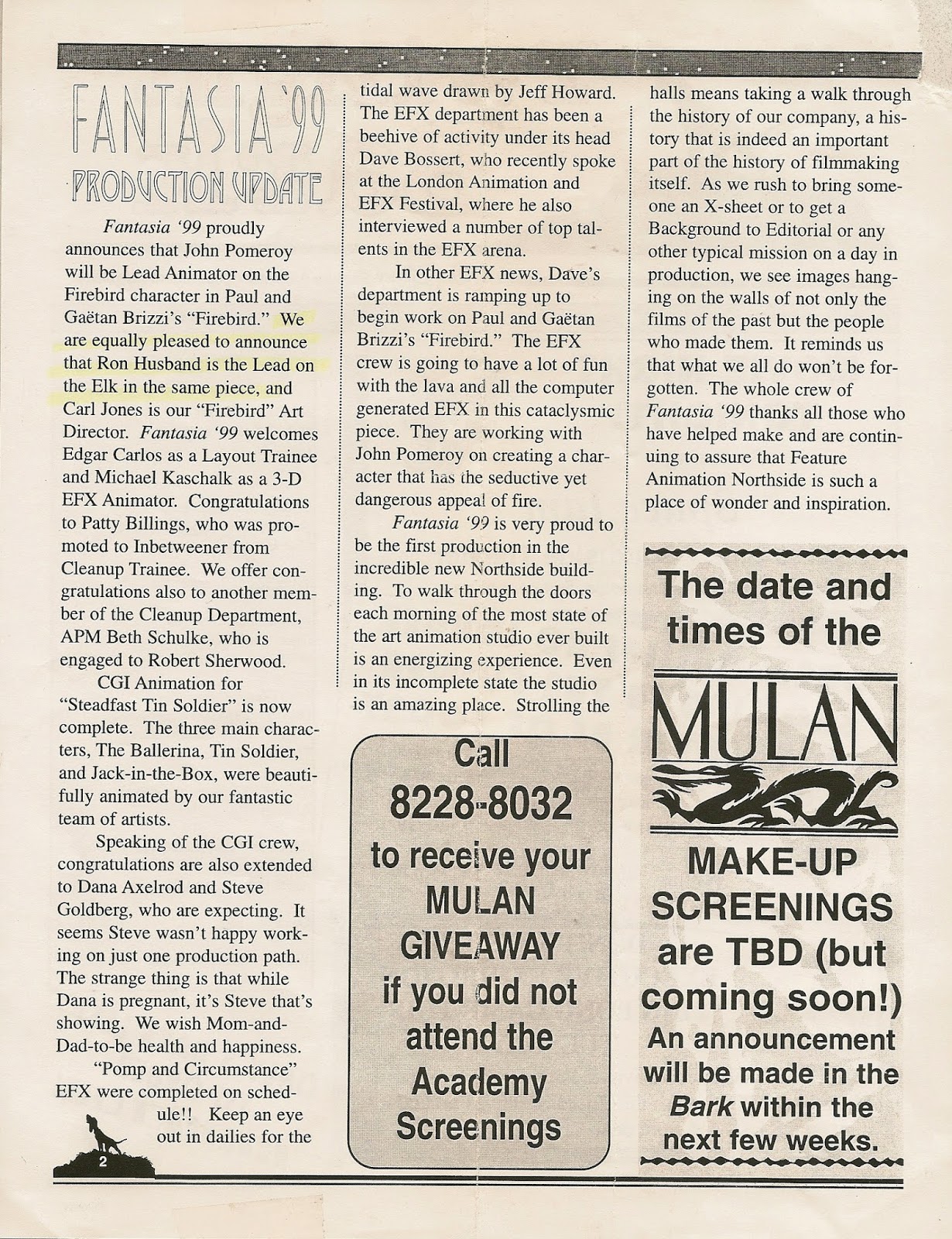 As ruler of the forest the Elk was to show strength, majesty, courage, encourage another (Sprite) and be regal at all times...without dialogue. Body language and timing would be the rule.

In addition to these spiritual qualities, the Brizzi brothers had a particular physical kind of elk in mind. Of the three kinds of elk in North America, the largest of the species, the Roosevelt Elk, embodied the brothers vision.

My research of articles, video and photographs had yielded plenty of information. 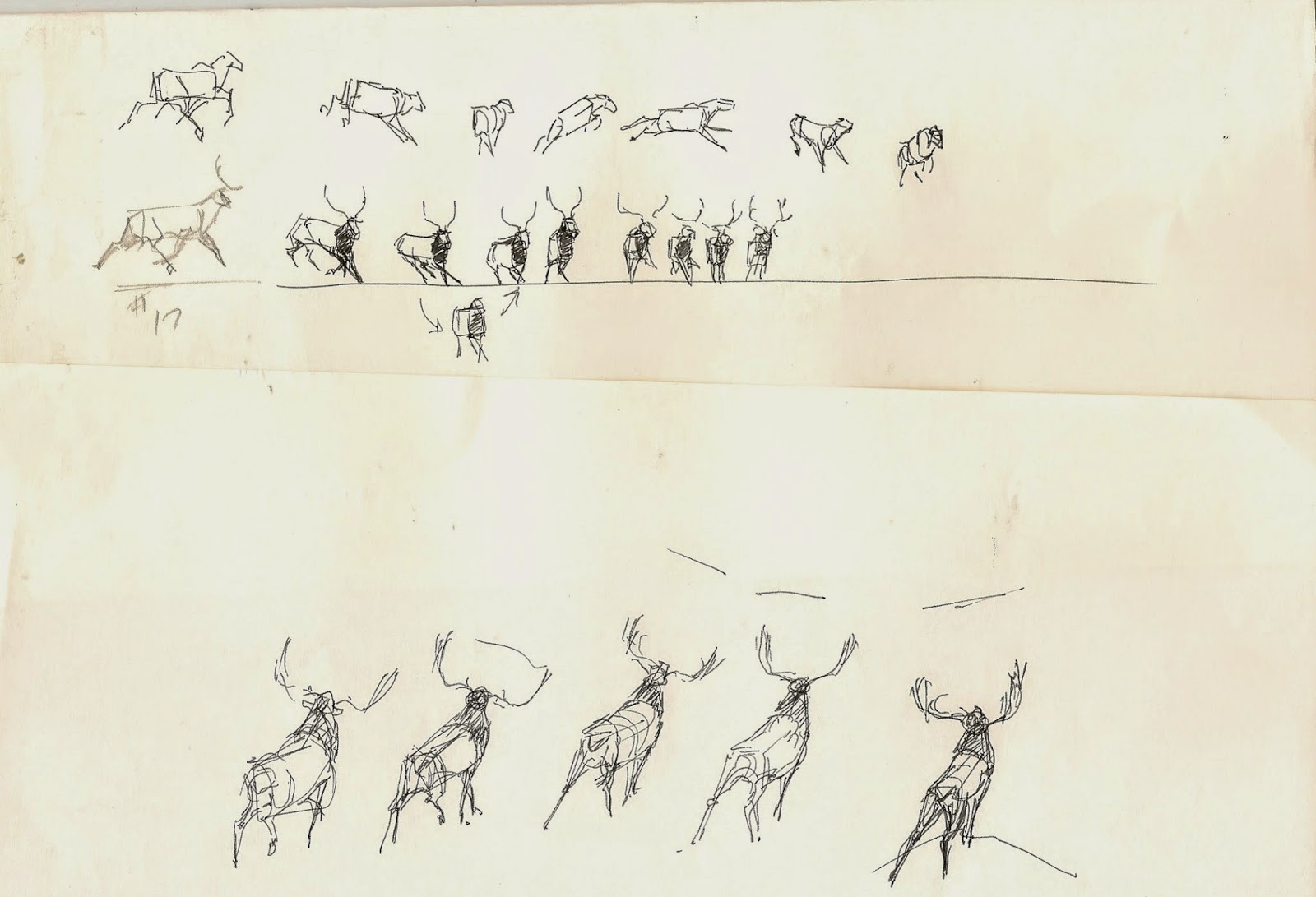 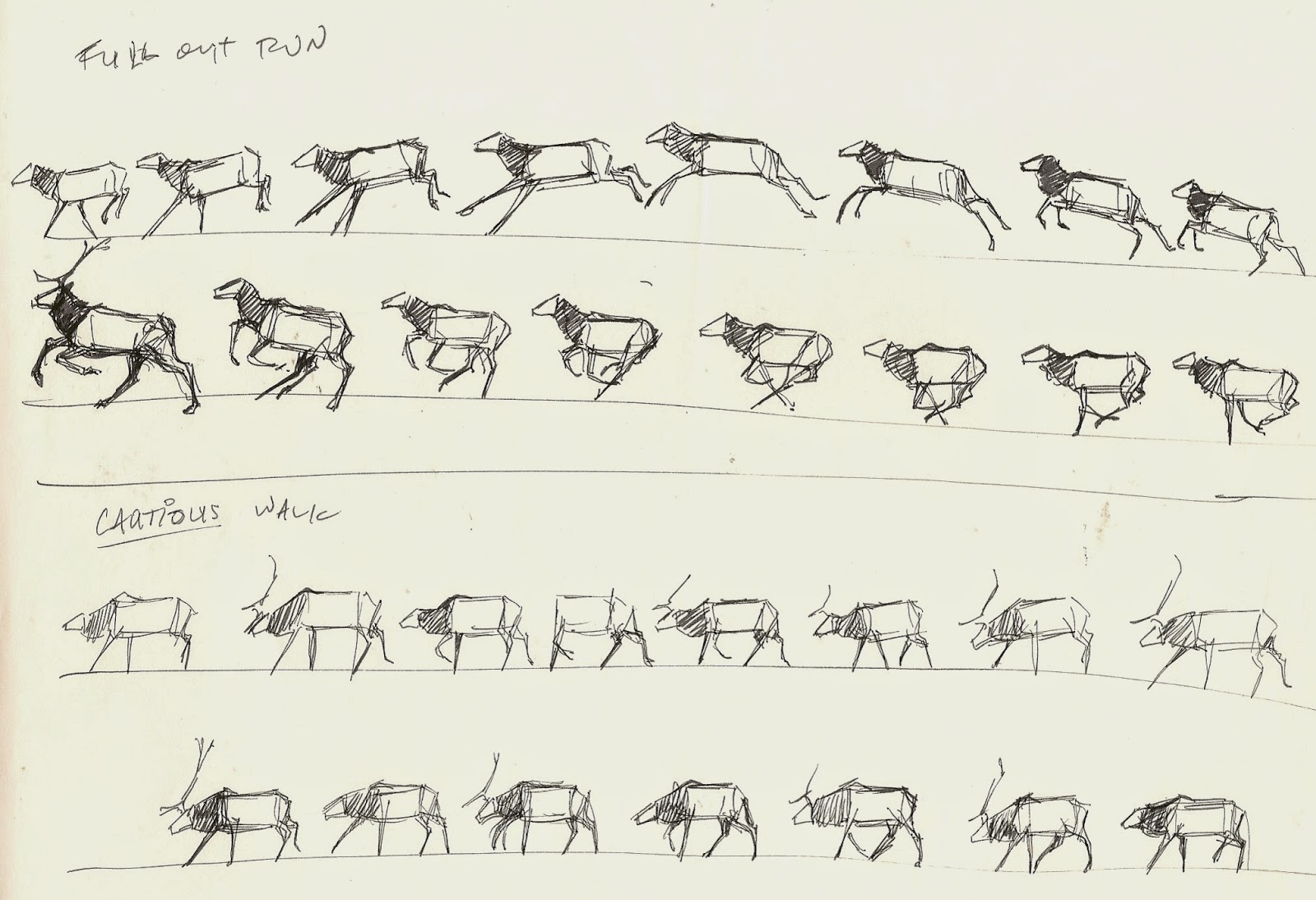 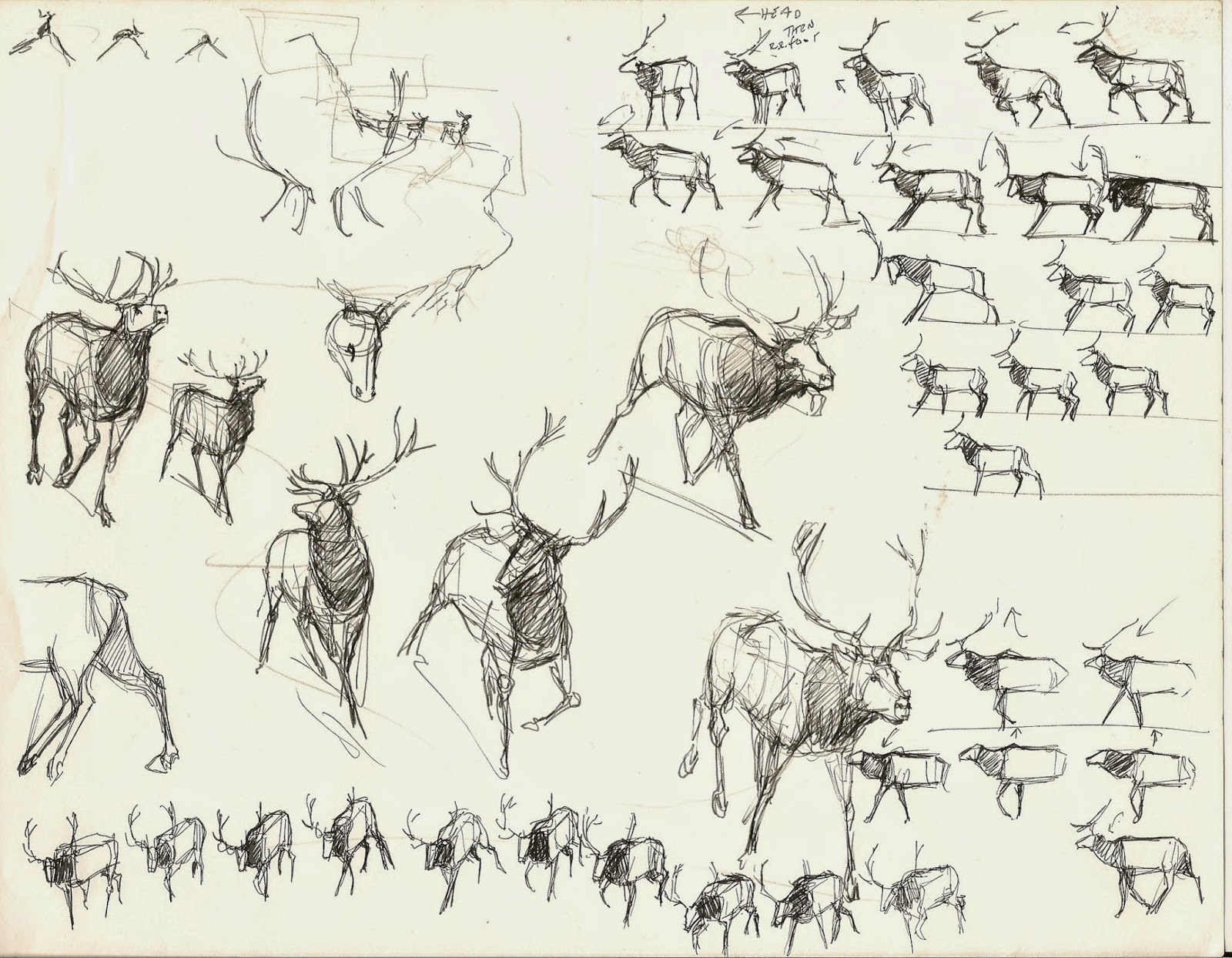 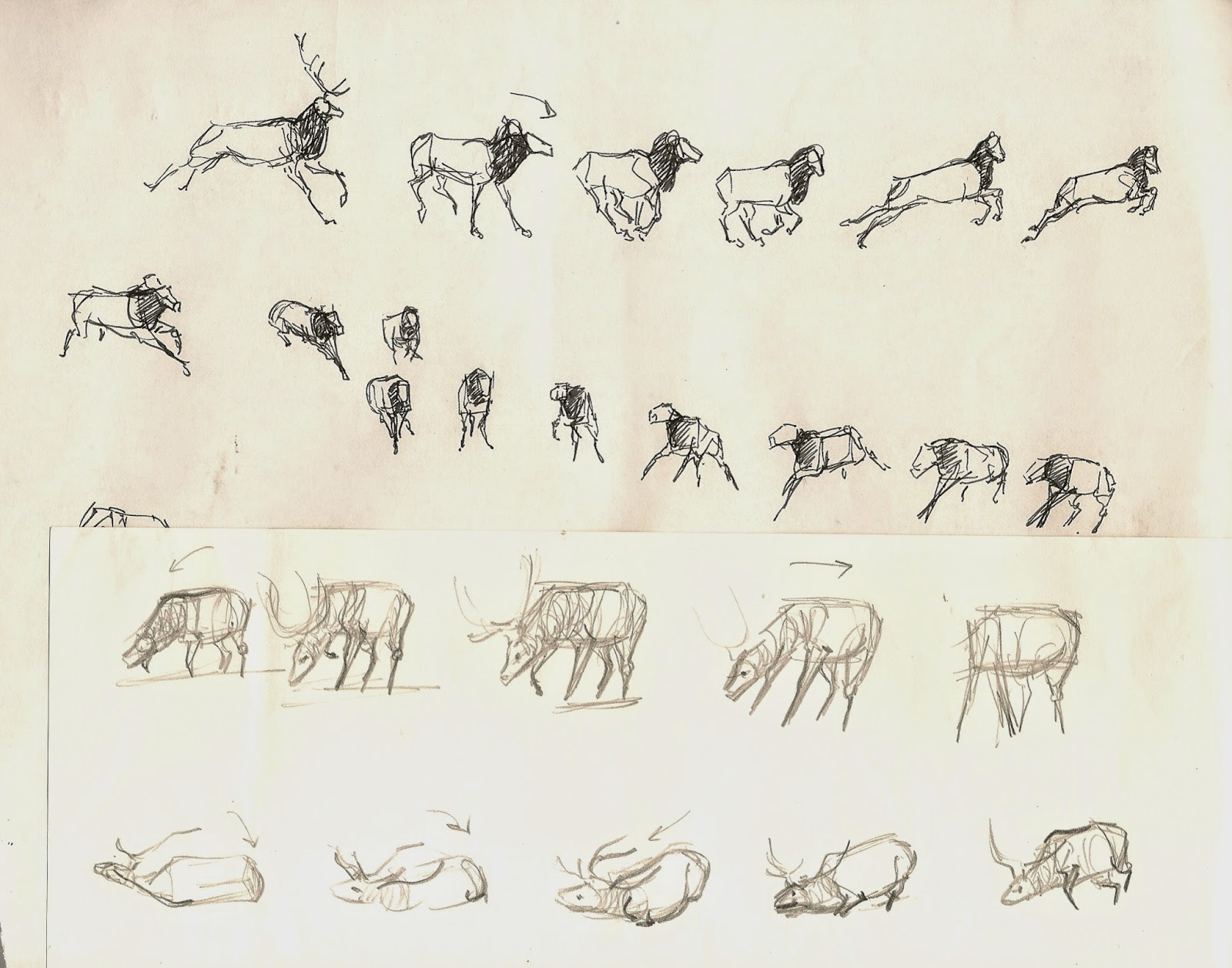 No substitute for the real thing...

Stepping away from the books, a trip to the local LA Zoo would finalize my information quest and then I could start animation.

A couple of problems emerged. There were no Roosevelt elk locally and any in California zoos had already shed their antlers (they would grow back at a rate of 1/2 inch  a day for months producing a 50"+ rack).

How could I draw live elk with full antlers; observe them in their natural habitat and touch them up close?  Simple, go where they are. Unfortunately, calls to zoos and wild life habitats in Southern California were fruitless. Northern CA, same results. Up the coastal states of Oregon and Washington, nothing there.

Bundle up, here we come.

Paul Brizzi, Fred Herrman and I flew out of  Los Angeles to Denver, CO. From there we took a small plane to a small airport in Idaho. A car was rented and Fred drove us across the state line to Plentywood, Montana where it was 28 degrees below zero at night (it warmed up to 14 below during the day:-)

A van was rented with big side windows. The elk were fed outside the vehicle so we could get a good look at them. With the heat going full blast, I sketched away.


These antlers would be harvested (cut off) while still covered with a furry skin referred to as 'velvet' which has a blood supply to support the fast (up to 5 ft. in two months) growing antlers. They were then sold, usually to foreign markets for medicinal and other purposes.


Our newsletter, The Twilight Bark chronicled our visit in pictures.


My cartoon, which was included in the article, is based on true events. We'd walked across the street from the hotel where we were staying to get breakfast. We entered the restaurant and the diners are all in short sleeve shirts and we are dressed like Ralphie's brother in A Christmas Story. They had a good laugh on us as one guy asked "Where you boys from...Florida?"