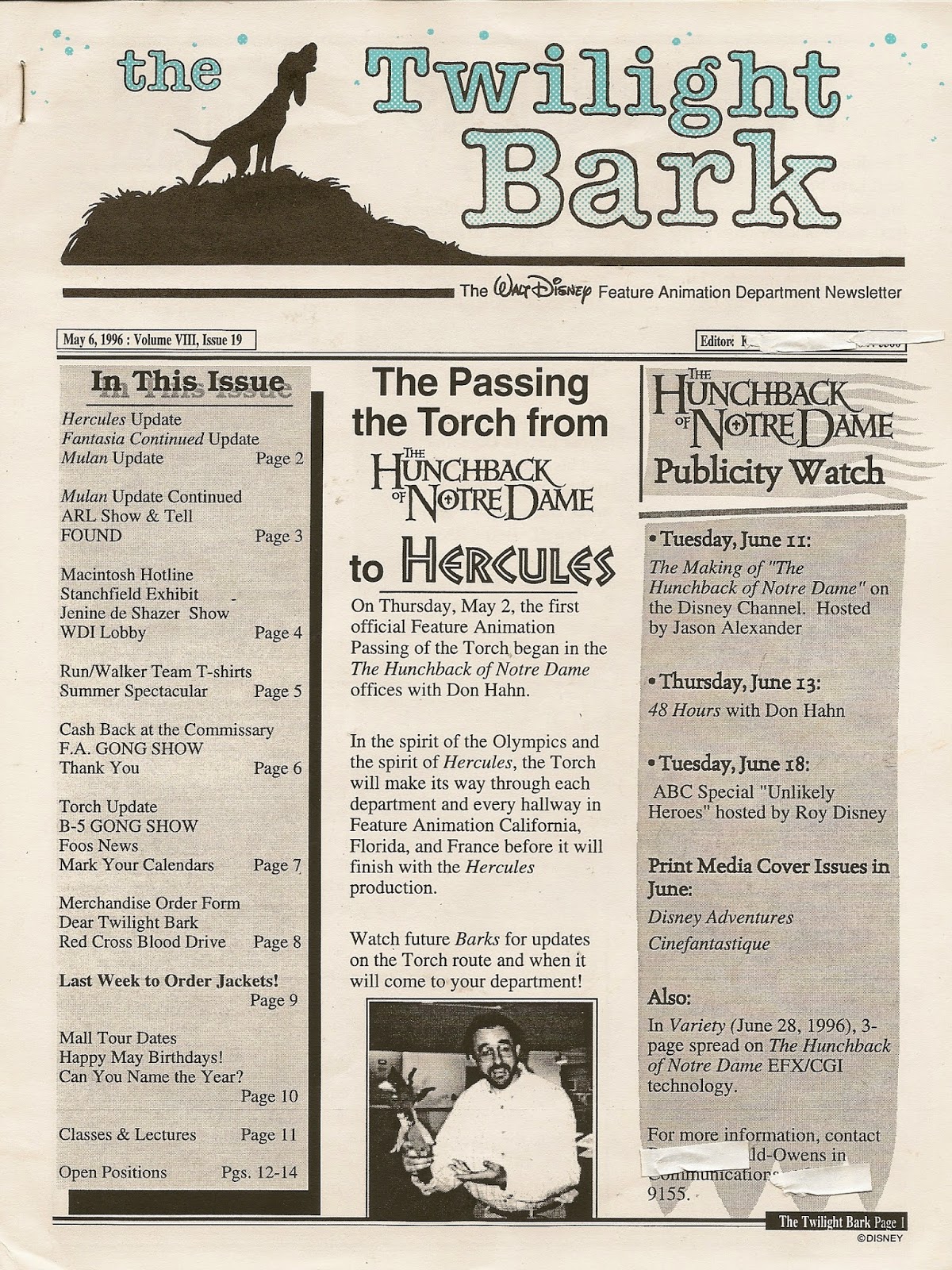 came to an end with the launch of The Hunchback of Notre Dame. The animation newsletter, the Twilight Bark heralded the Passing of the Torch to the production Hercules which had been in the works for some months. 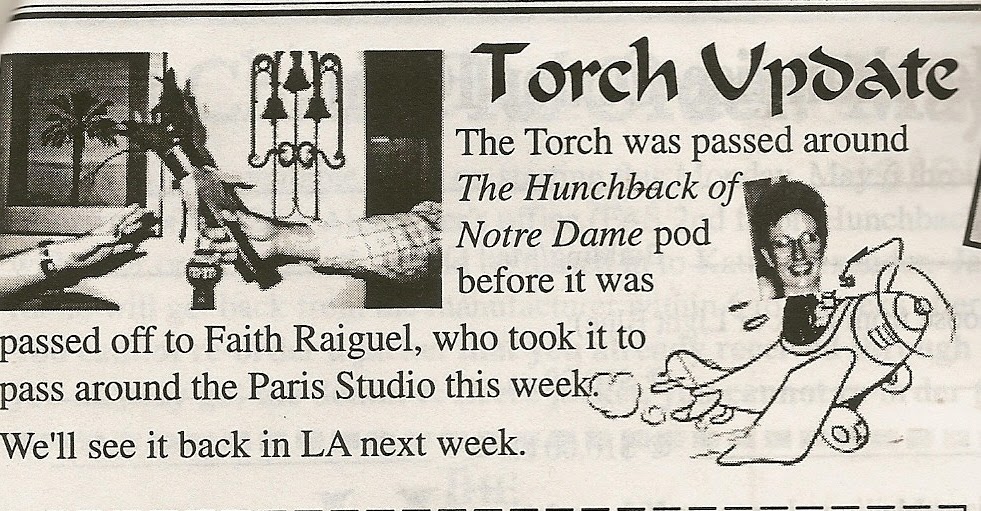 Yes, there was a figurative and literal torch being passed from completed production to the next in line :-)


At that time multiple productions were being done concurrently with the aim to release a Disney Feature film every year.  Fantasia 2000 was in development. It was then known as Fantasia Continued ( and Fantasia '99) and Disney's first venture into 3D Animation, the Dinosaur Project was perculating.

But, for now it was Hercules' time to take the spotlight.

Coming over from CGI training for the Dinosaur project (more on this later), I was asked to 'lend a hand' to help Hercules to the finish line. By this time much of the primary animation had already been completed. I got a screen credit for the Titans and Cyclops, but in reality, I did a variety of characters (and none of the Cyclops:-)


Thumbnails of various scenes I animated...

Lending a hand to finish a production was nothing new for me. On my first feature Rescuers, everybody pitched in as that feature came to an end. We animators did clean up, effects and anything else needed to complete the production.

On Fox and the Hound my primary animation was on Chief and some adult Copper. After all the character animation was completed, I, like the other character animators did whatever else was needed to finish the film.  I did some clean up and special effects animation. We tried to avoid cleaning up our own rough animation, though it was not always possible.

I added the leaves effects to a Big Mama scene...The one where she is carrying out a pile of leaves and dropping them to the ground with one leaf settling on Todd's head.

I also animated the close up of the stick and bear trap being set off by a close up of Amos' hand and some ground being splattered by shotgun pellets.  And if you're wondering, Yes...I do remember pretty accurately each scene I've ever worked on (got the thumbnails to prove it).

As the years passed, helping out in other areas became passe as the animation department expanded with an abundance of specialized personnel in every department.

Also during the time, Ebony Magazine ran a short article about Wes Sullivan (rough inbetweener) and my contributions to Hercules...

The invitation to the Hercules screening and wrap party signaled the productions' end...and the beginning of the next. (Up next... (for me - Fantasia 2000). 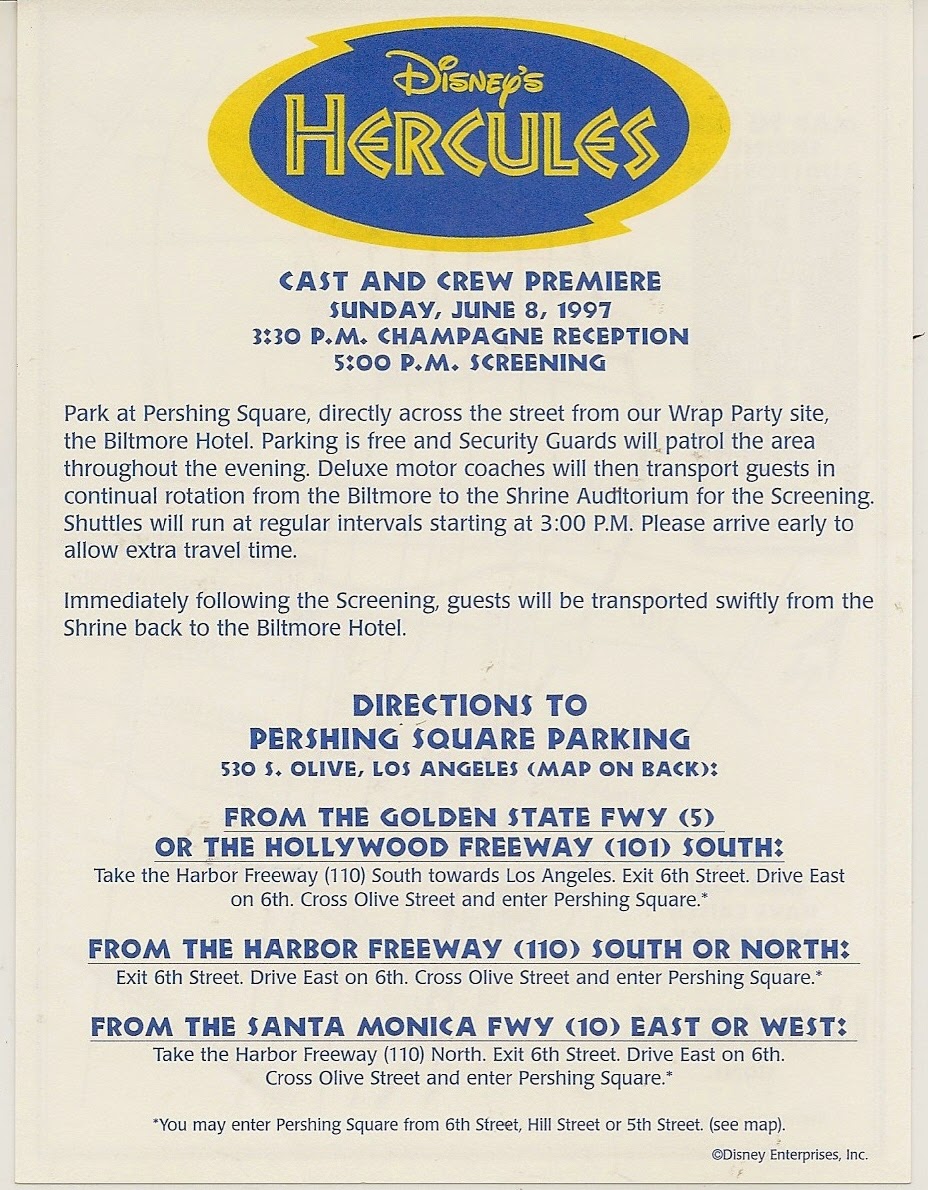 Posted by Ron Husband at 3:25 PM No comments: