Xavier and The Lion King...

My trip to Xavier...

Between the release of Aladdin and start of The Lion King, I took a trip to Xavier University in New Orleans, LA.  Bill Matthews was leading the animation trainee department at Disney during this time and was always on the lookout for the next Frank, Ollie or Milt. He traveled around the country interviewing talent and selling the Disney brand of animated film making. In his many travels he had made friends with Charles Graves, the art department chairman at Xavier.  (For those of you who may not know, Xavier is an HBCU/Historically Black College and University. The HBCU's were started in the east and southern United States in the 1800's to afford blacks the opportunity to further their education during a time when blacks were not admitted elsewhere.)

With the growing success of Disney animation in the 1990's, we and other studios got our share of portfolios from hopefuls wanting be a part of this form of entertainment.  Student portfolios which came from schools like Cal Arts and Long Beach State who taught animation had a decisive advantage on schools with talented students but with no formal instruction in the art of animation.

Bill saw an opportunity to share some animation knowledge to those intuitions which had limited or no knowledge at all. He approached me with a proposition: Would I be willing to teach a series of workshops geared toward sharing the knowledge of animated film making and bringing the students up to speed as to what it would take to become a Disney animator, telling story through line and music?

I and several others had been representing animation through Disney for a number of years, traveling to elementary, junior high, high schools and colleges. The studio even had an animation lecture kit with examples of the various steps it takes to make an animated film. These kits made our presentations visually easier to follow.

Instead of the usual twenty minute presentation followed by a short Q&A session, this visit to New Orleans would last two weeks...10 days of intense training and dispensed information on my part.

My first objective was to develop an outline to present to Bill so he in turn could make a presentation to management to justify the expense.


First I needed some film clips from the great "vault". They were much easier to take along than a bulky lecture kit that measured at least 30"x40" and weighted a ton.

I chose the following animated film clips for the workshops... 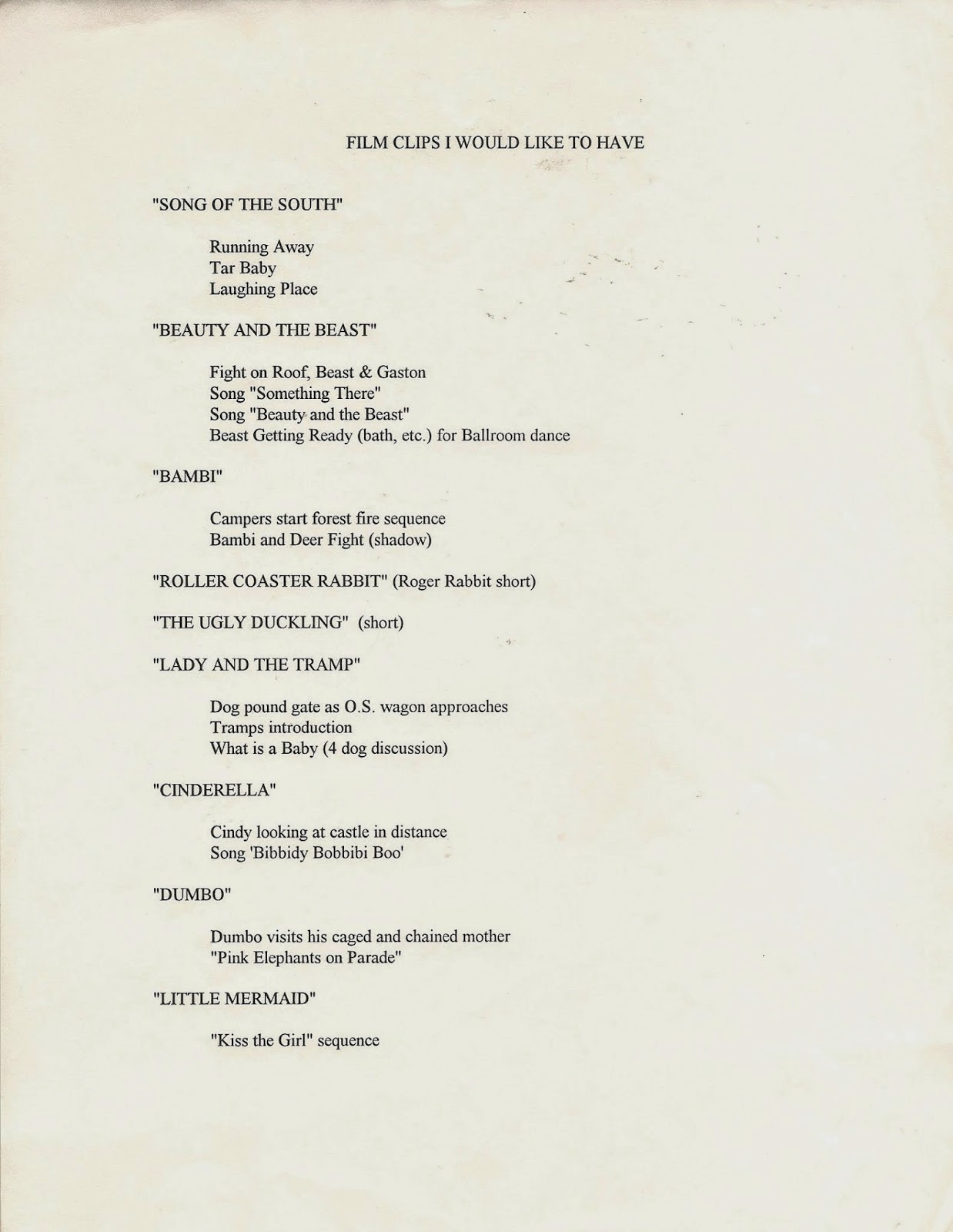 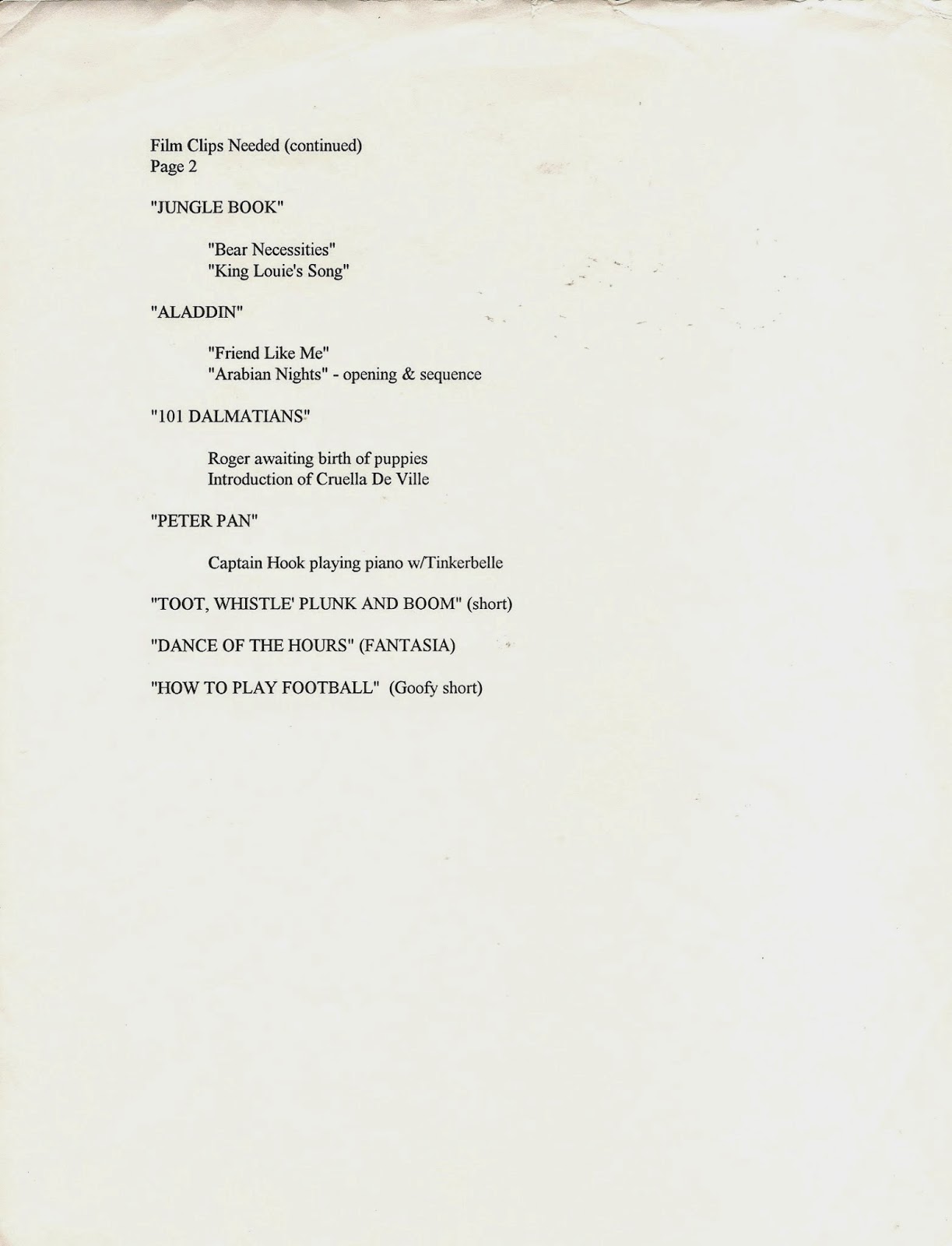 These short snippets of animation were going to help me explain to the students how important each section (color, music, dialogue, etc.) contributed to the whole of the animated film making process.


My outline would consist of:
-A general talk on animation
-Introduction to the various kinds and purposes of animation
-Getting Specific (the process of Disney animation)
-Drawing Board Exercise
-The Objective
-Teamwork for Results
-Storytelling
-Action Analysis
-Class Project
-Life Drawing Classes
-Open Class Discussion (after all sessions)

Armed with this proposal, Bill had no resistance in getting the OK for the trip.

I stayed in the French Quarter of town in a hotel across from the canal. My only automobile driving was back and forth to the school which was about ten minutes away by freeway. The narrow, one way streets were enough to discourage me from driving. Walking was far better to see the many sights to be seen there.

The food in New Orleans is magnificent, whether a hole-in-the-wall or five star restaurant, the food was good. I indulged at a different restaurant every night after classes and on the weekends took a trolley to the outskirts of town to sample the eats.


Itinerary for my time at Xavier. 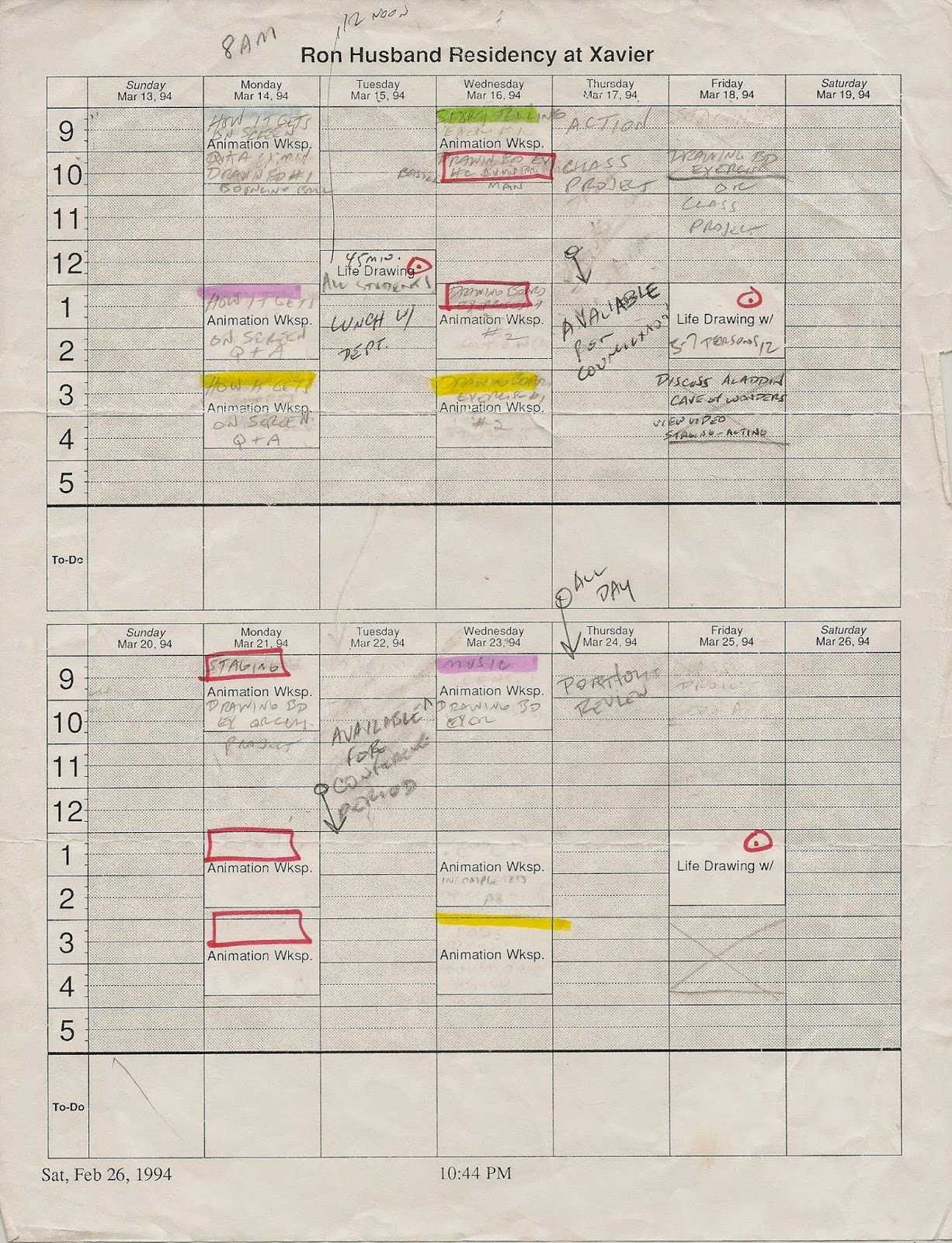 The workshops went great. The students were enthusiastic and I already mentioned the food...


The students and faculty were appreciative of my contribution to the Xavier experience and I made new friends in the Big Easy and got to spread the word about animation...old school.

Two weeks later I was back to Glendale and onto our next production The Lion King...

Going into the next production The Lion King, I got the opportunity to be assigned to the Andreas Deja led crew animating the dramatic villain character Scar. I finished the film animating the comedic Pumbaa and Timon led by Tony Bancroft and Mike Surrey.


One of the highlights of animation (for me) is the time spent in preparation, observation and the study of what is about to be animated. This has always been a strong point in Disney's history going back to the early days of feature work. Having a basis of reality to launch out from brings believability to what is being animated.

Everybody could not be sent to Kenya, Africa like the art directors.  So, the studio did the next best thing...we animators boarded a bus for a trip to the San Diego Wild Animal Park. From the flat bed trucks we got to see the animals we would be drawing up close and personal.

From there we visited the San Diego Zoo and got behind the scenes tours of the animals, spent the night in San Diego, and then back to Glendale for more in depth African animal research before we picked up a pencil to animate.

Live African animals were brought to the studio for us to observe and draw.
﻿﻿

Starting a Pen and Ink Illustration...

About five years ago I got serious about writing 'Quick Sketching with Ron Husband'. This meant all other art related activities would have to take a back seat so I could dedicate my 'spare time' to the book project which, at the time I called 'What's in a Line'( my editor suggested the name change and a couple of chapter re-namings).

At that time I was working full time in Disney's publication department, teaching figure drawing at Gnomon School one night a week, and had taken on various freelance projects. I'd produced a string of pen and ink illustrations in the past, and from about 2006 and leading up to my hiatus from extra curricular art activities and projects in 2009, I had committed myself to complete one 23" x 29" pen and ink project a year. Working a couple hours a night and on weekends, four illustrations were completed in that time frame.

For the last four and a half years writing my book swallowed up all my spare time. Now I am back to my committed goal of an illustration a year.

I chose to focus my research on African American subjects in the 1930's United States south for these particular projects. Black ink on white illustration board for me was as natural as a nod to the black and white photographs of that era.

Here are examples of my use of pen and ink, cross hatching style, and subject matter from my 2006 'Baptism' and 2007 'Juke Joint Saturday Night'.


Each successive illustration got more challenging, complicated and fun as the years unfolded.

My years in animation have left the lasting impression on me to know the real so that it (the real) can be caricatured. Thus I am constantly in search for that jumping off point, something I can point to as my point of departure into the fantastic, yet grounded in reality. Consequently I am always on the lookout for a photograph that will jump start my imagination. Sometimes I will find a photo I like and keep it for years before the proper motivation and circumstances bring it to the forefront of my thought processes.

Years ago I came across a photograph of a baseball park and saw the potential in what it could become. I filed it away for future reference and the future is here, my jumping off point.

Again from my animation days, research comes into focus. Since I have been in this genre for some time, I had some knowledge of the clothing being worn. Today we dress casually for sporting events, but in the thirties and even into the 1950's a ballgame was a dressy affair and this aspect of the spectators at the game had to be depicted realistically to add credibility to the piece.

The uniforms of the players and umpire were easy to research. There are numerous photographs of that era in circulation and a lot of good reading on the history of Negro League Baseball before Jackie Robinson made it into the major leagues.

Thumbnails in my sketchbook...
Thumbnailing is a must to get an overall view of the artwork and to work out any business. Thumbs also help one visualize the placement of characters so that they do not overlap in such a way that their individuality gets lost. It is important that every action reads and that each character is clearly defined in silhouette. (Sounds like discussing a scene handout with the director.)

My sketchbook is constantly by my side. Not only to quick sketch what I observe (basketball players) but whenever I get an inspiration (for my next illustration), I can jot down images so I'll have a permanent record of that particular thought. I think of the work in the pages of my sketchbooks as practicing/preparation for the real stuff.

I start out with Strathmore 500 Bristol 2-ply illustration board...

an HB pencil works best for me at this point...

blown up/down to the size I want, the photograph reference is pencilled in.

Keeping in mind one definition of a good gesture of a figure is one in which the figure is about to do something or just finished doing something...and let the fun begin.

After the pencil work is completed, I'll ink all pencil lines and add the cross hatching style using a mechanical pen.

My goal is to have the finished piece stand up from a distance and up close with each individual section contributing to the whole piece of artwork and it must be fun to look at, a piece of eye candy as the old saying goes.

We'll see in a couple of months if all this comes about.