Early days at the studio...

February 10th 1975, was my first day on the lot at Disney Animation, reporting to Ed Hansen, head of the department.  He sent me upstairs to Eric Larsen (one of the legendary 'Nine Old Men' of Disney animation) who was in charge of training young artists to be future Disney animators.
I was given a desk in a large room across the hall from Eric, where all the potential animators were. There I met Glen Keane, Tad Stones, Jerry Reese, Jerry Moeler, Randy Cooke, and a host of others.
The assignment was: you had four weeks to do an animation test (supervised by Eric).  No matter when you entered the program, you had four weeks.  People were in various stages of their 'weeks' before showing their tests to veteran animators for a sink or swim nod.  Though we got paid, there was no guarantee you'd be around for a fifth week.
About half passed the first four week test, and were then given another four weeks to animate another test, showing how much you had learned from the first one. About one in three passed the second round. Fortunately for me they took into consideration your background; as I had no animation experience.  Literally learning the first day what an exposure sheet was, how to 'flip' drawings and set up Disney paper on Disney pegs, etc..  Others who had come from Cal-Arts or another studio had more experience and their tests and understanding of animation were far superior to mine.  Yet, in this communal atmosphere we all encouraged and pushed each other along. Life long friendships were forged in this pressured atmosphere. We all had the same goal, to make it to the next level and bring others with us. There was a tremendous camaraderie, everybody wanting others to 'make it' and Eric wanting all of us to succeed.
Passing my second test, I was sent to the first floor to learn animation by doing inbetweens for a 'real' animator, the legend, Frank Thomas. 'The Rescuers' was in production at that time.  Normally a picture was released every three years and this production was about half finished when I came on board. Frank let me do a scene here and there; Bernard and Critters,  but my main job was to do his inbetweens during the work day.  My animation was done at night and on weekends; about fifty feet total. In those days an animator had to do a minimum of a hundred feet to get screen credit (notice how older animation/live action features have such short credits compared to today? :)

Pete's Dragon was next for me, working with Gary Goldman, doing his inbetweens and given a scene here and there for another fifty or so feet... sorry no screen credit :) But, by this time I had worked my way up to assistant animator, animating and doing inbetweens during working hours-yes!

Though other Americans of African decent had worked at the studio, Mike McKinney and I were the first to be on track to be animators, and Disney was making sure the world knew it.  This publicity shot went to magazines and newspapers across the country.

The article is from this February 1978 issue of Ebony Magazine. 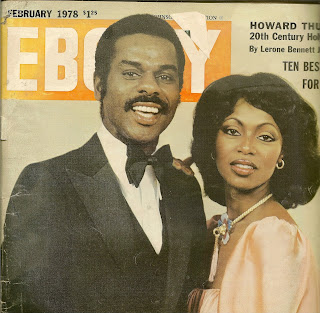 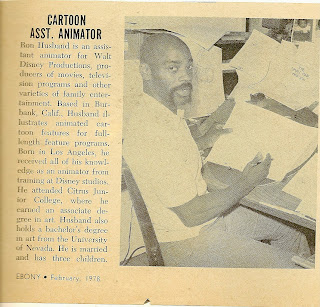 This event was a big deal for the studio. They had been making feature films since the release of Snow White in 1937.

As a result, I received a great amount of fan mail from people who followed Disney animation and had no idea there were people of color behind the scenes.  This is a typical letter, which I saved in a folder about 4 inches thick of like letters recieved over the years, (notice the 13 cent stamp:).  I responded to as many letters that came to me, offering words of encouragement to young artists. I said to myself, if I ever got in a position where I could offer advice or direction to others, I would.  Coming out of college there was no one to answer my questions or share advice as I stumbled around looking for an avenue to express my creativity.  So, I took an active role in sharing with others. 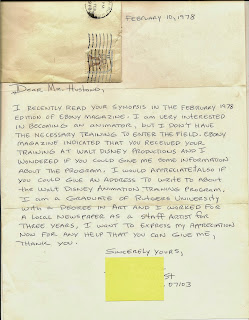 The end and a beginning...

I finished my last day as a Walt Disney employee on Friday, September 20, 2013.  This culminated 38 years at the Mouse House.  Beginning as a Trainee in 1975, working my way up through in-betweener, breakdown artist, assistant animator, animator, and then supervising animator and working on such titles as Rescuers, Pete's Dragon, Small One, Fox and Hound, Black Cauldron, Great Mouse Detective,Oliver & Co., The Little Mermaid, Rescuers Down Under, Aladdin, Lion King, Beauty and the Beast, Hercules, Atlantis, Fantasia 2000 and Treasure Planet before moving on from the animation world into the publishing world and working as a  Character Artist for Disney Consumer Products.

As I reflected on my time at Disney and throughout my career as an artist, I realized I'd collected not only memories, but mementos that I'd love to share beginning with photos and tons of stories. 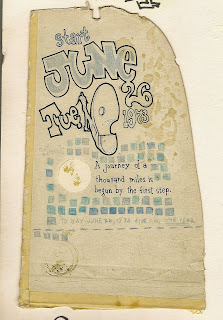 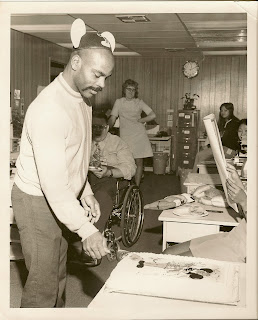 The above photos are of the beginning and ending of my first job after graduating from UNLV. Actually, my very first job was at Eubanks in Monrovia, CA on Duarte Road. It lasted one week. I had several resumes out at the time and was extremely desperate for a job. My wife LaVonne, sons Mikel and Jai, and I were living with my Mom at the time and to get on my own two feet and take care of my family was top priority. I took the first job offered, Eubanks. In the middle of the week Honeywell in West Covina called and offered me a job in their Technical Illustration Dept. I took the job and the second day there, June 26th, 1973 I covered the top of my desk with a large piece of illustration board and wrote in the lower left hand corner ..."a journey of a thousand miles starts with the first step"and that circle is a penny (since lost) from my first cashed paycheck. Not knowing where my journey was to end, I had at least started. My duties at Honeywell consisted of making block diagrams and flow charts and plenty of overtime. This allowed me to move my family to a just completed apartment complex on Highland Ave. across from the Duarte post office. This leg of my journey lasted until February 1975. I had gone to school training to be a commercial artist, illustrate books and magazines, or at least be able to draw in some capacity. Making flow charts with a technical pen and ruler, though it paid the bills, did nothing for my creative streak. So, I took a night class at Art Center College of Design in LA.  Mr Sam McKim, the instructor, encouraged me to take my portfolio to the Disney animation department trainee division, headed up by Eric Larsen. My interview with Eric went fine as he looked over my portfolio which was filled with slick, commercial art pieces.  I could tell by the look on his face that he was not at all impressed, even with the Pinocchio I had put in...he asked me,"Do you have any sketches?" Sketches are things I failed to include in my portfolio, not realizing how important they are in the field of animation. I was applying for admission to be trained in animation, though I knew nothing about animation and had not even seen a animated feature in probably a decade.

Fortunately back in high school, before I was kicked out of my art class, my teacher encouraged me to keep a sketch pad with me at all times. I took her advice and by this time had built up a small supply of filled sketch pads. I went home, gathered three pads, put them in an envelope addressed to Eric and dropped them off at the guard gate on Buena Vista in Burbank and headed back to Duarte. Disney called a few weeks later and invited me into the program. I did not know at the time that the trainee program was started a few years earlier to train young artists to be animators in the Disney style, before the older animators Frank Thomas, Ollie Johnston, Milt Kahl etc. retired (more on this later)....I took a lower salary but gained a whole world of creativity and learning through this new path on my journey. This last photograph is from the going away gathering at Honeywell, once they knew where I was going, they ran wild with the Disney theme.   They made me wear the mouse ears to cut the mouse cake... Afro hair style was in for black men in 1975 and here I am with a shaved head and fu manchu mustache, forty years ahead of time.
Stay tuned for another leg of my journey.
Posted by Ron Husband at 9:29 PM 19 comments: