The art of Steamboat School...

The  exhibition will run from October 26 to December 22.
The reception and awards ceremony will be held on October 27.

Original artwork from Steamboat School that will be on display at the exhibition in New York...

If you're in the New York area, stop by and see the exhibit!
Until next time...


November '98...
Three months before Beauty and the Beast-Encore Edition was put to rest John Parker and I were recipients of the Mwalimu Award.
(The word 'MWALIMU' is Swahli, meaning someone who is held in the esteem and respect.)

The award is presented yearly (since 1992) by the Monrovia-Duarte Black Alumni Association to graduates of Monrovia or Duarte high schools.
John and I played football together and after high school he received a scholarship to play basketball at Cal-Poly San Luis Obispo. He too is an artist and a life long Monrovian. Our friendship spans our lifetime:-)

February 10,1975 was my first day in the Disney Animation Trainee Program. I had no idea I was entering the ultimate experience in storytelling.
For me, with no animation experience, everyday was a mind expanding adventure in learning. This was the way Walt Disney who died in 1966 wanted it.
The program, headed by Disney Legend Eric Larson, was patterned after similar training classes Walt had instituted for his artist back in  1935.
The studio at that time was working on the first full length animated feature Snow White and the Seven Dwarfs which was to be released two years later.

Walt knew that better trained artists make better storytellers...
and part of Walt's goal was to make fairy tales 'entertaining and believable" through animation.
To achieve that dream he felt his artists needed to become more knowledgeable.
To Walt, "animation drawings should live, not just move".

Walt took the steps to make this a reality.


In an eight page memo addressed to Don Graham, (Don was associated with the Chouinard School of Art and had conducted drawing classes at the studio.) Walt outlined what he wanted to see in his artists and the classes that would help them towards that goal.
Walt called on Don to head a program designed to teach the basics of good drawing, action analysis, acting, staging, caricature and other related skills that an animator would need.
In the memo Walt  described the qualities a 'good animator' should posse:
Good draftsmanship
Knowledge of caricature, of action as well as features.
Knowledge and appreciation of acting
Ability to think up gags and put over gags
Knowledge of story construction and audience values
Knowledge and understanding of all the mechanical and detailed routine involved in his work, in order that he may be able to apply his other abilities without becoming tied up in a knot by lack of technique along these lines.

These classes were beneficial in 1935 and now four decades later they would return.

In 1975 Walt Stanchfield told us "there will be an attempt to to reinstate the learning atmosphere that once permeated this studio" and "there will be no attempt to return to any particular era of the past, but to incorporate a composite of all the great accomplishments of the past into a future product that we can all be proud of".

Along with an animation desk, paper,pencils, field guides,exposure sheets etc. we were issued a three inch folder with the title Disney School of Animation.

The folder contained  much of Walt's philosophy about a number of topics-"Naturally the first and most important thing for any animator to know is how to draw"..."The first duty of the cartoon is not to picture or duplicate real action or things as they actually happen - but to give a caricature of life and action"...
"Only if he knows the reality of things can he create a fantasy, an illusion or a caricature convincingly".

encouragement and challenges to animators-"to be and do the best we can- to observe, analyze and interpret- to learn and apply-to draw and act like professionals- to be imaginative, entertaining and communicative".
in it Eric Larson asked "Are we happy with mediocrity? Are we making use of only a portion of our abilities?"...

Along with this wealth of informative information there were plenty of blank pages to take notes of the classes and lectures attended.
This was the learning environment that permeated the studio in the '70s and continued throughout my tenure there.
This exert from an article entitled The Old Disney Magic Can the nine new men recapture it? by Shamus Culhane,  reprinted in the studio newspaper Disney Line (1976). It captures the heart of the  animation department at the time. 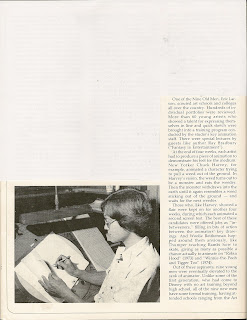 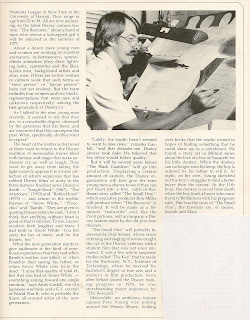 February 1999...
this learning/teaching, enthusiastic atmosphere still existed at the studio as we embarked on the next feature project Atlantis:The Lost Empire...

Directors Kirk Wise and Gary Trousdale contacted me to talk about supervising a character on the picture. In Kirk's words, "if this is Disneyland, we're going straight to Adventure Land, explosions action and adventure".

This description brought a smile to my face and I wanted in.
I looked over the characters still available as some characters had already been cast. There were about three of the ensemble remaining and I said I'll give some thought to which one to take on.

While pondering which character to latch on to, as usual I sat outside on the Northside studio patio and quick sketched on breaks. My sketching attracts a crowd or at least a curious onlooker or two. Why would an artist carry a sketchbook and sketch in it?...seems so strange:-)
One day I was quizzed on the topic of quick sketching which led to this article which appeared in the studio newsletter (below). 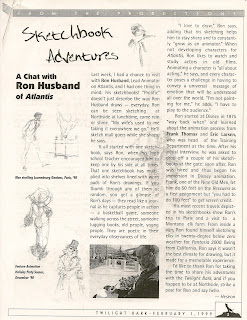 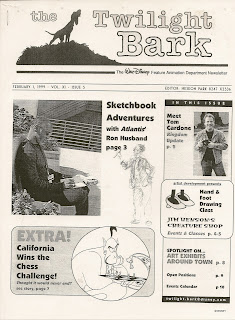 One fateful day as I sat outside the Northside animation building sketching, Don Hahn producer on Atlantis, approached me and says "Ron, we want you to animate Dr. Sweet"...I had been leaning toward him from the beginning:-) now it's official.

Dr. Joshua Sweet...
Kirk and Gary had Mike Mignola of comic book fame (Hellboy) do preliminary design of the  characters after his style. Small heads in proportion to big bodies.
A stylized look of the background/layout with hard sharp edges through out was the look of the film and this applied to the characters too.

When I joined the team there had been some preliminary drawings based on Mignola's design for Dr. Sweet. He was to be one of the largest of the group. The villain Rourke was as physically imposing but not as athletic looking.

Research...
I took the design had already been done and attempted to make the Doctor more appealing and animatable, (if there is such a word).
The studio provides enough time for the artist to acquaint themselves with the character(s) they are animating. This time given by the studio to research is one of the activities I have enjoyed over the years.

This being a period piece it is important that the the medical bag  and the contents within be designed to fit in that time period (pre-World War 1).
I contacted several medical schools (Howard University, Wash. DC and Virginia Commonwealth University, Richmond,VA) and they were extremely helpful in supplying useful information and photographs.


No doctor's equipment (above) would be complete without a bone saw of which Dr. Sweet makes mention of in the movie. The stethoscope which he wears is authentic too.


Character Design...
I was asked more than once did I model Dr, Sweet after Michael Clarke Duncan (1957-2012) actor in the movie The Green Mile (1999). The answer is no.
We had gone through this approval process six to nine months before the movie's release and I had no knowledge of Michael at the time.
Dr. Sweet was modeled Woody Strode (1914-1994), former UCLA(teammate of Jackie Robinson) and LA Ram football player turned actor(Sergeant Rutledge, Spartacus etc,).

In order to sell the newly designed Doctor I did drawings of the head, mouth shapes, him in costume(s) and action to show the directors. 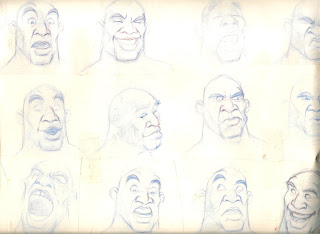 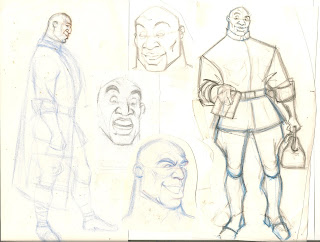 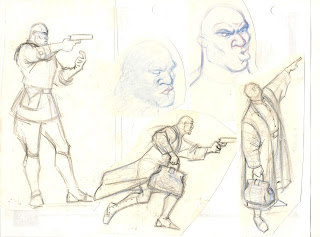 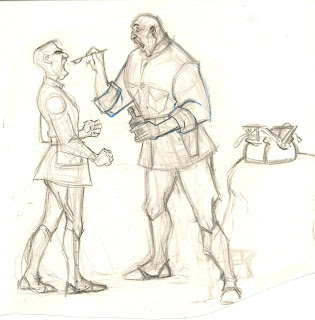 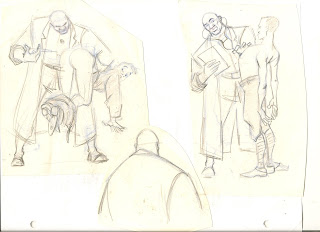 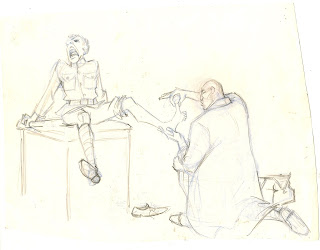 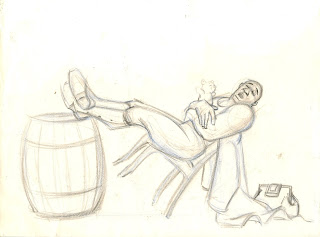 With Kirk and Gary's approval I'm ready to start animating.

( below- For those not familiar with my Facebook account- this arrived last week , though dated 3/16, certificate and pin for Steamboat School being named a Junior Library Guild selection for 2016.) 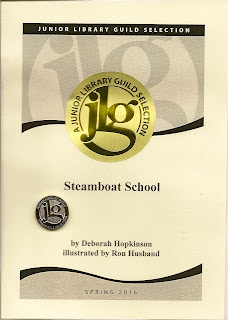 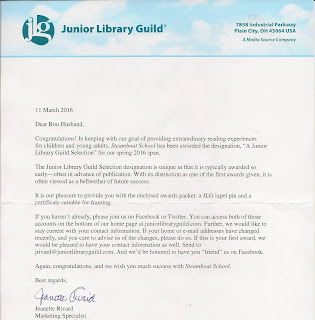