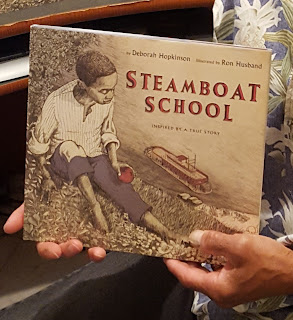 Today Steamboat School, published by Disney-Jump at the Sun, authored by Deborah Hopkinson and illustrated by myself is available at Barnes & Noble and other fine bookstores and can be ordered through Amazon.com.

Steamboat School has a long history. It would take ten years from initial concept to it's release today.

After thirty years in Disney Feature Animation I landed at Disney Publishing Worldwide located in Glendale, CA.  The department publishes coloring books, activity and chapter books. For our department to attempt a book of this sort was a vast departure from the Disney themes and characters the department is known for and to utilize my pen and ink drawing style was a first for the department.

Barbara Nelson, one of the many talented artist in that department wrote the first treatment entitled 'Our Floating School'.

Tony Fejeran, one of the senior designers in the department put together artwork for a presentation to the head of the department, Ken Shue and dept. manager Brent Ford.  Since no artwork existed at the time, Tony used illustrations I had previously done, stock illustrations, chose type size, font, the unique book dimensions and suggested the aged paper background that is used.

With the ok from Ken and Brent, we got the green light to proceed.

The illustrations of Steamboat School are truly a labor of love. The early success of this book (see below) is due to the combination of words and art work.  Deborah Hopkinson's text is extremely moving. Many times I read over the text and played the words over and over in my mind as I sought the best way to visually communicate her words. It was not until I read the story to a group of children at my church that I felt the impact of the words. There were several times my voice broke as I read aloud this story. You 'could have heard a pin drop' which is saying a lot for an audience of four to twelve year old kids who listened in rapt attention.

The illustrations in Steamboat School are an offshoot of two things, my quick sketching technique (story telling drawings using body language) and the philosophy of storytelling I gleaned from my years in feature animation.

In animation you tell a story in a series of drawings, in illustration, a story is told in a single drawing with communication as the goal.

I first did small sketches on tracing paper.

Then I enlarged the sketches to illustration board (2-ply Strathmore 500) to the full page size.

Next, mechanical pen and black India ink. Color was added in photoshop over an aged paper background to finish the illustrations.

There were many years from the start to the completion of this project and it was placed on "hold" for several years with changes in editor, designer, etc.

Finally, the name was changed to Steamboat School and the final go ahead to finish the book came through. It was my final assignment before I retired on September 20, 2013. A few weeks into retirement I was called back to the department to do some minor changes in the artwork and was told the summer of 2016 would be the date of publication. Now all I had to do is wait a couple of years.
The wait is finally over!

Steamboat School has been named a Junior Library Guild selection for 2016 and has been given a starred review by Kirkus (below). 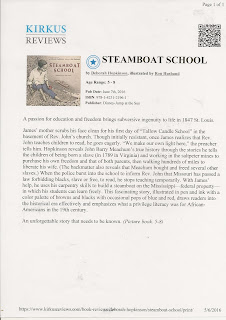 I hope you enjoy it!
Ron