The Hunchback Of Notre Dame and more...part 4 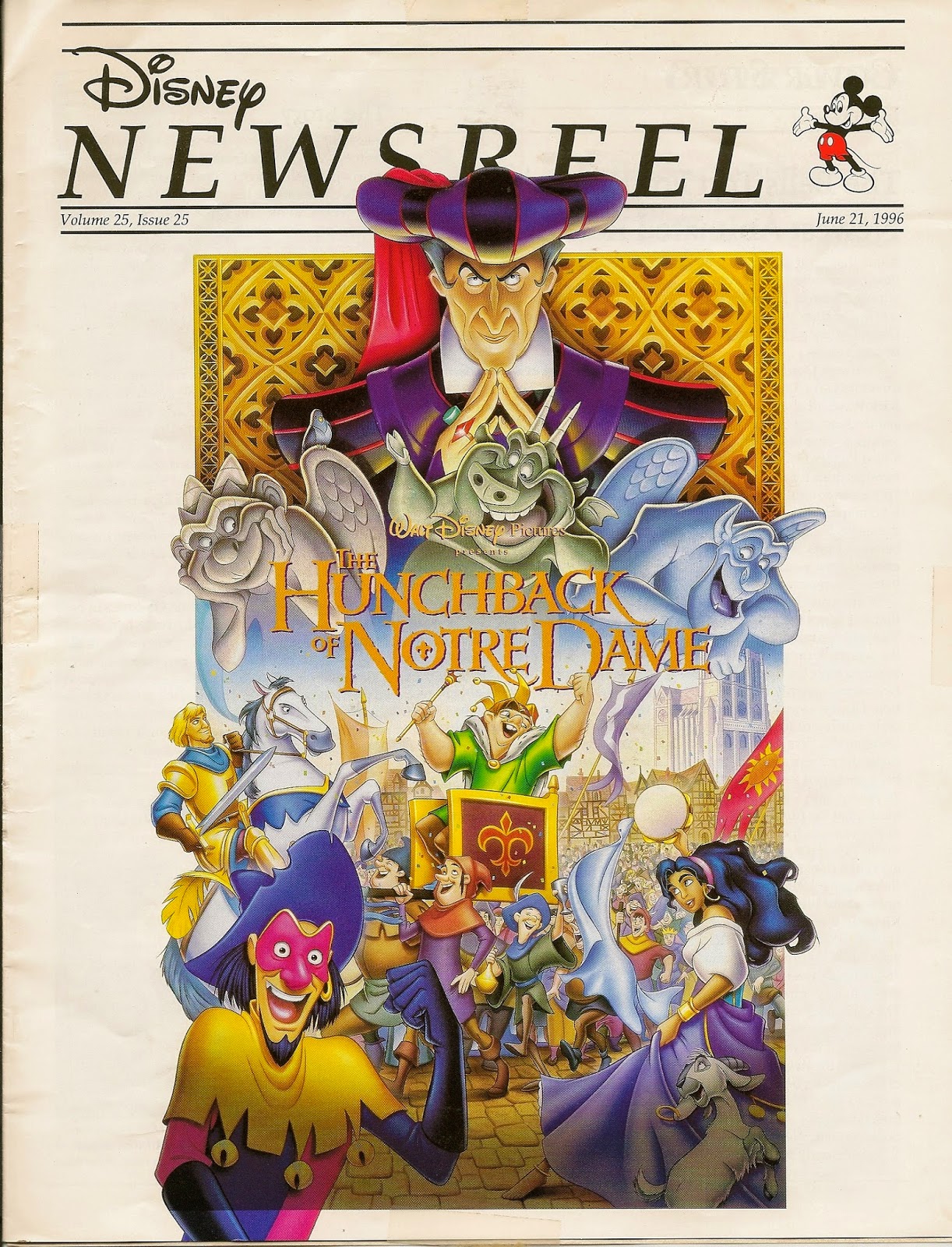 The animation for The Hunchback of Notre Dame comes to a conclusion...

The company newsletter informs us there will be a Super Premier at the Superdome in New Orleans, Louisiana for Hunchback. 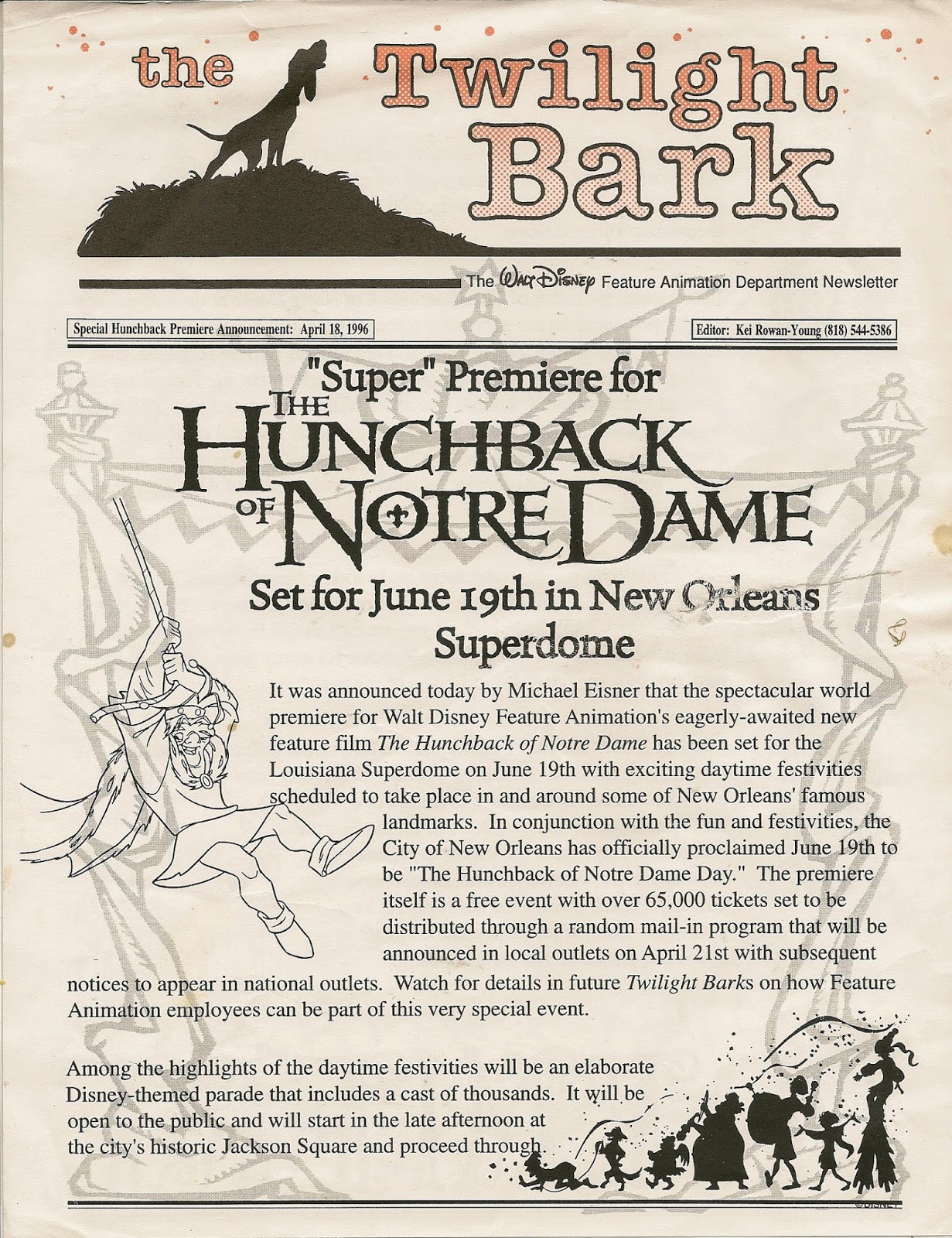 May 1996...  The animation crew and their families are invited to the Big Easy for the Premier and other festivities... 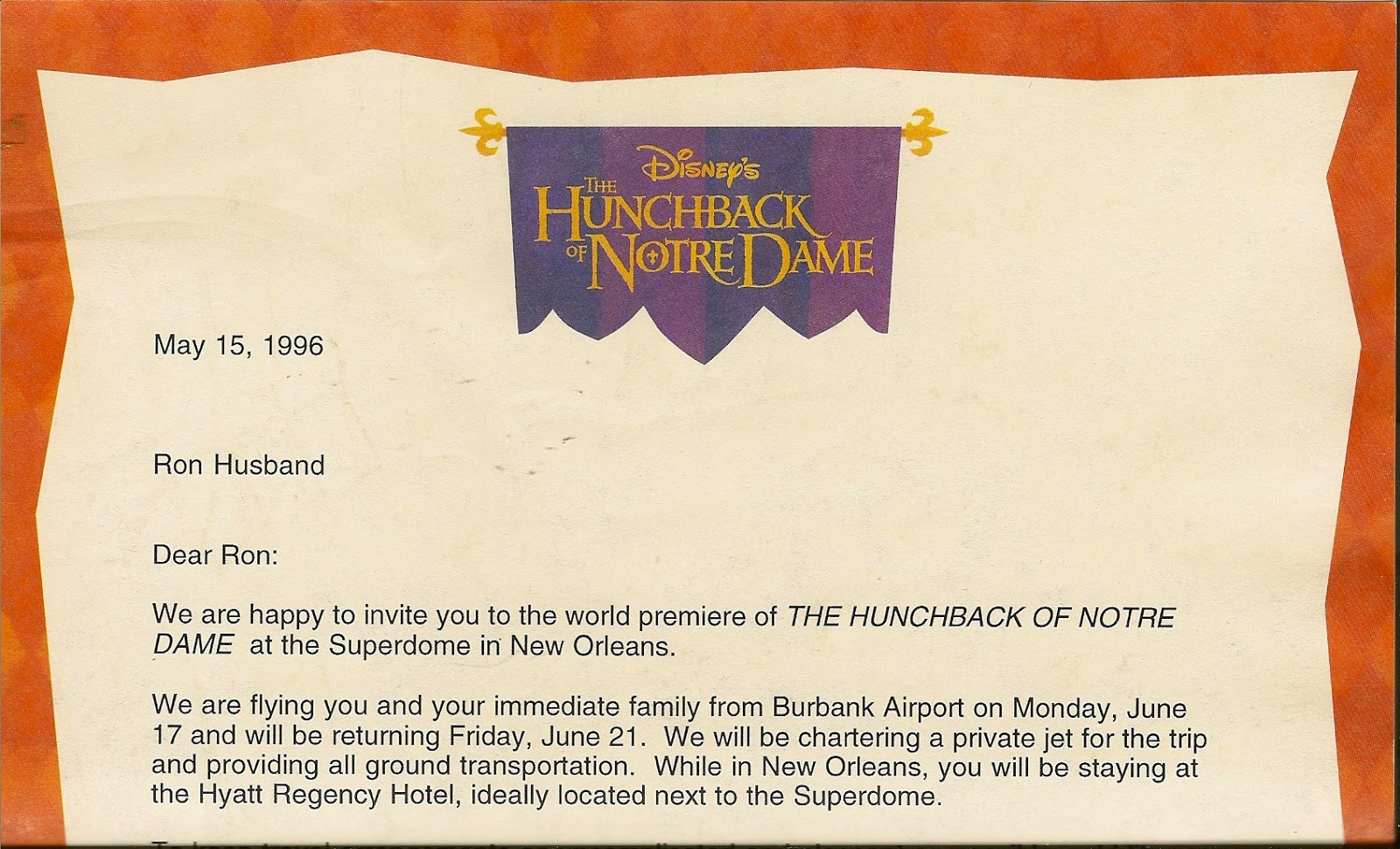 The traditional cast and crew party was held here in Los Angeles... 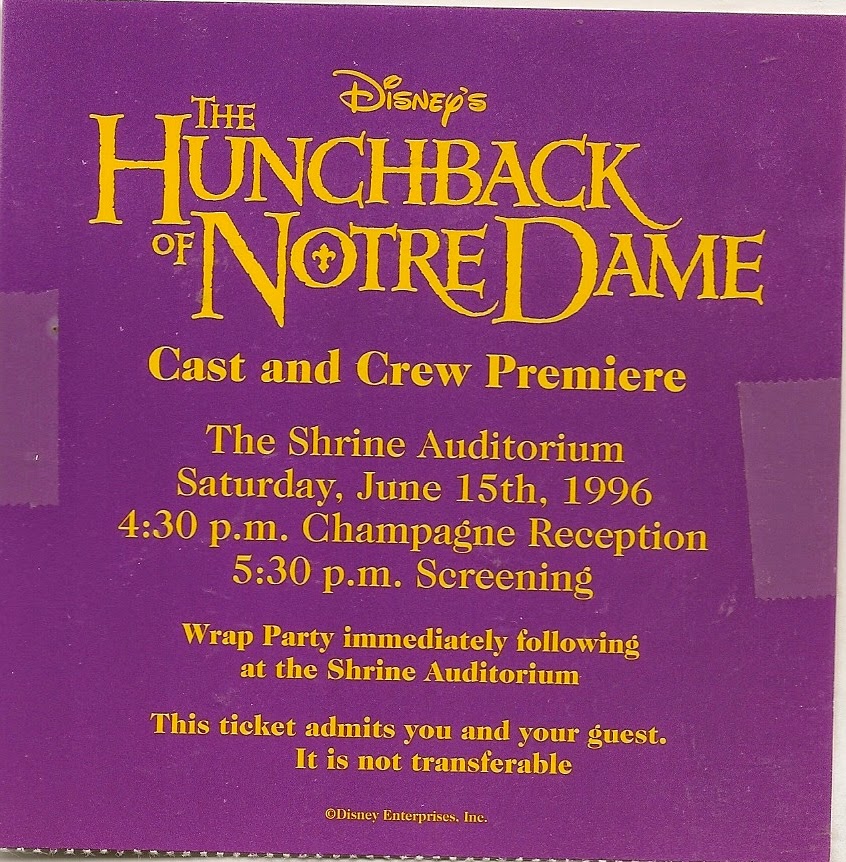 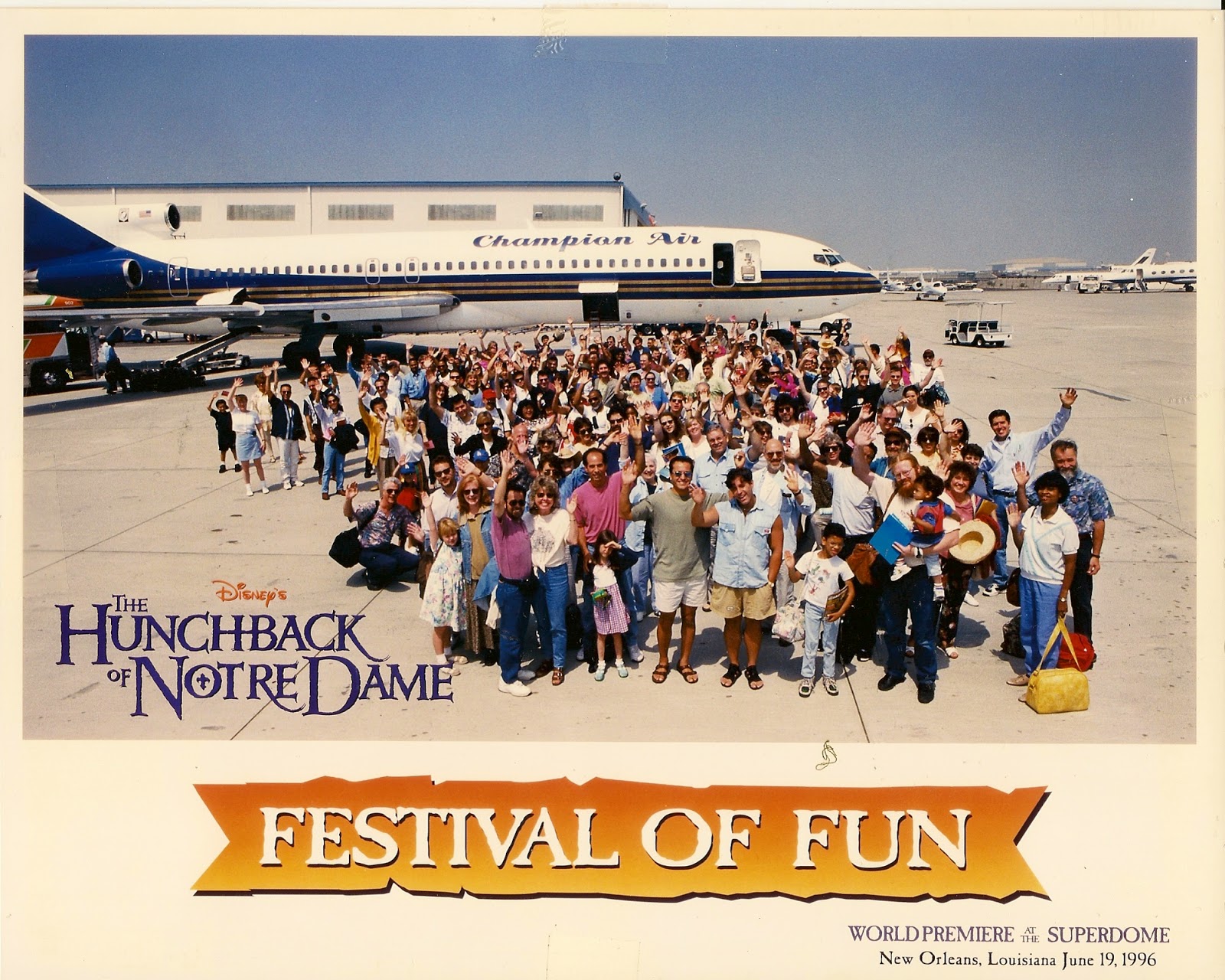 The crew and our families at LAX.

LaVonne, my daughter Melissa, and me as we boarded the plane. Melissa, back for the summer from her freshman year of college at Spelman, was the only one of our three kids still at home...

My sons; Jai, coming from Morehouse College in Atlanta, GA and Mikel, from Howard U in Washington, DC, met us in New Orleans. 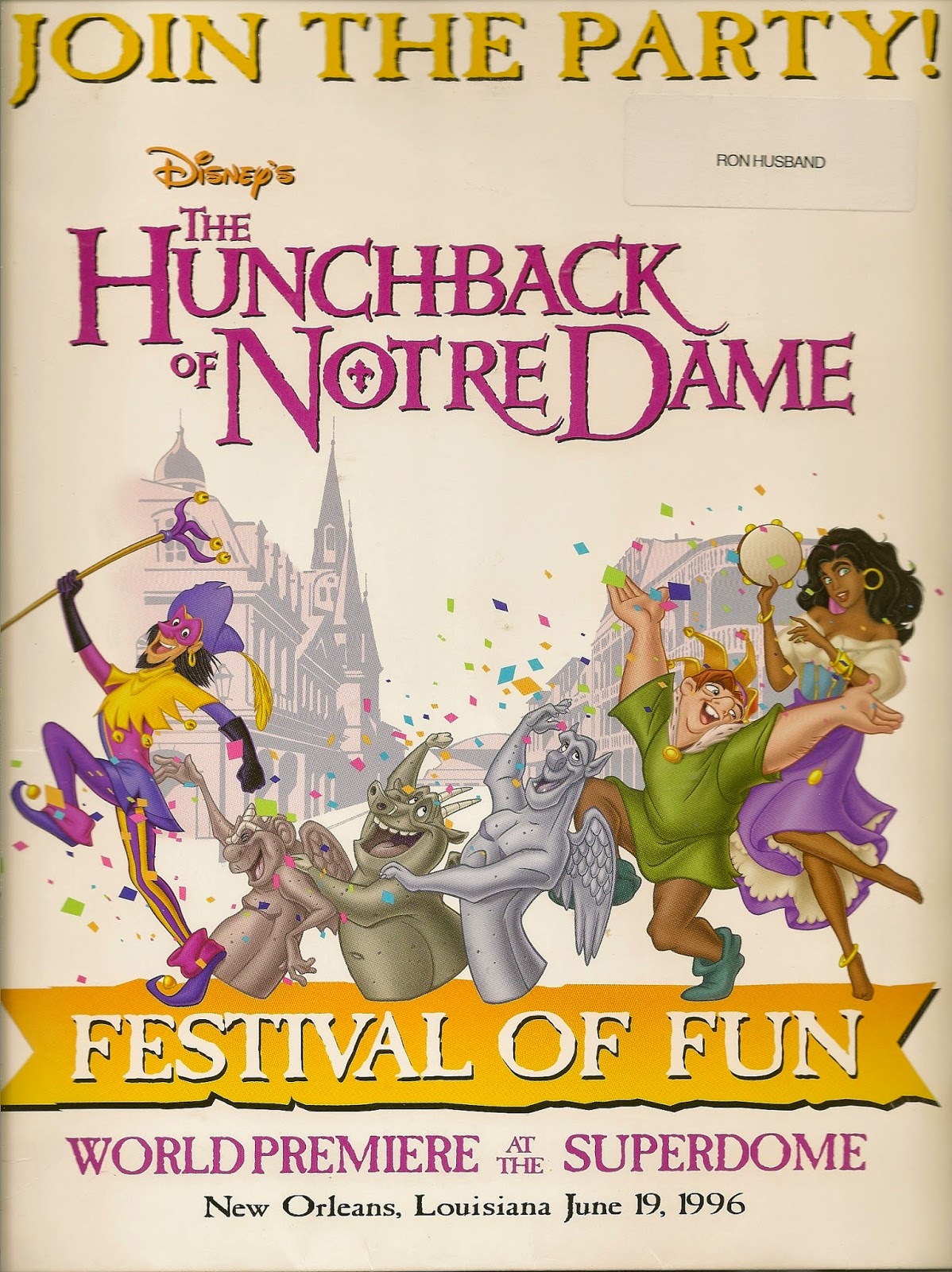 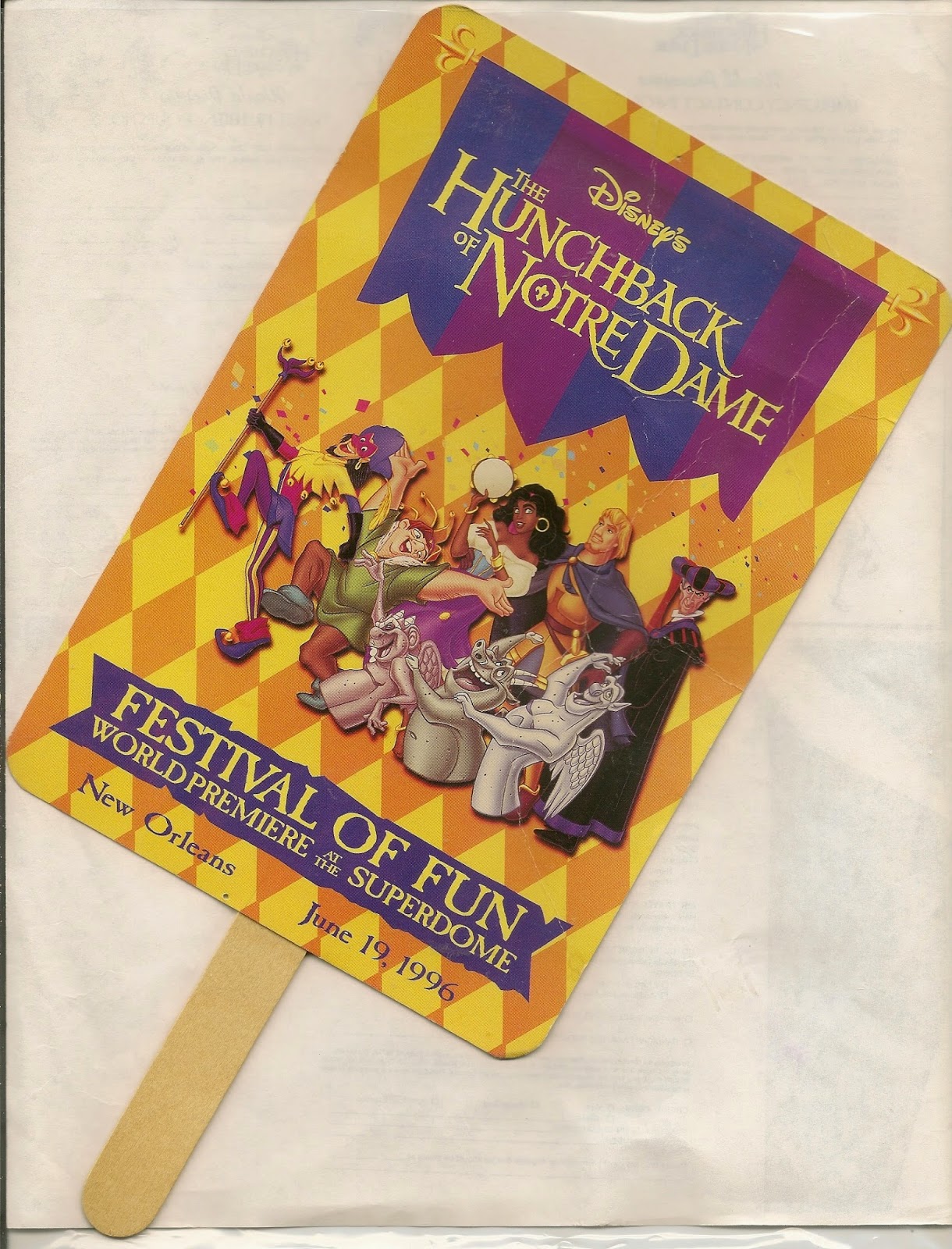 Above left, our day-to-day guidebook to the fun and festivities in New Orleans...And above right, anticipating the heat, a fan to cool off from the sweat worked up from the planned activities.

First up, dinner at the Gallier Hall (old Mayors Mansion) with it's beautifully decorated rooms, and delicious food prepared by chef Paul Prudhomme.  And then...


we walked, led by a small band, to the Spanish Plaza where we boarded  the Riverboat Cajun Queen for dessert as we floated on the Mississippi River.


We were bussed to Jackson Square for The Hunchback of Notre Dame Parade.. 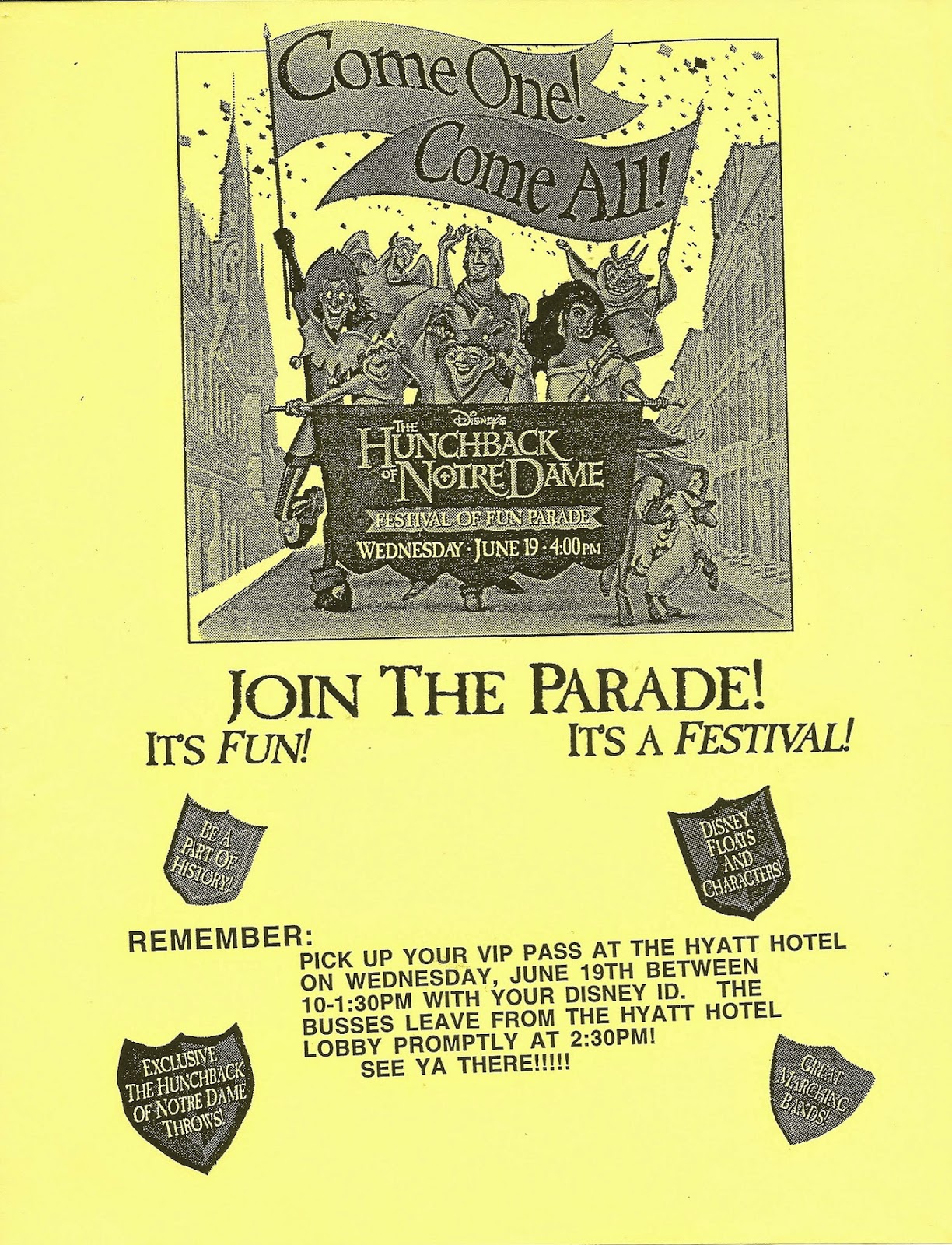 Finally, we were bussed to the Superdome to join 60,000 plus animation fans for the Pre-Show, Premier screening, and Reception.

The Bark spotlighted our time there. 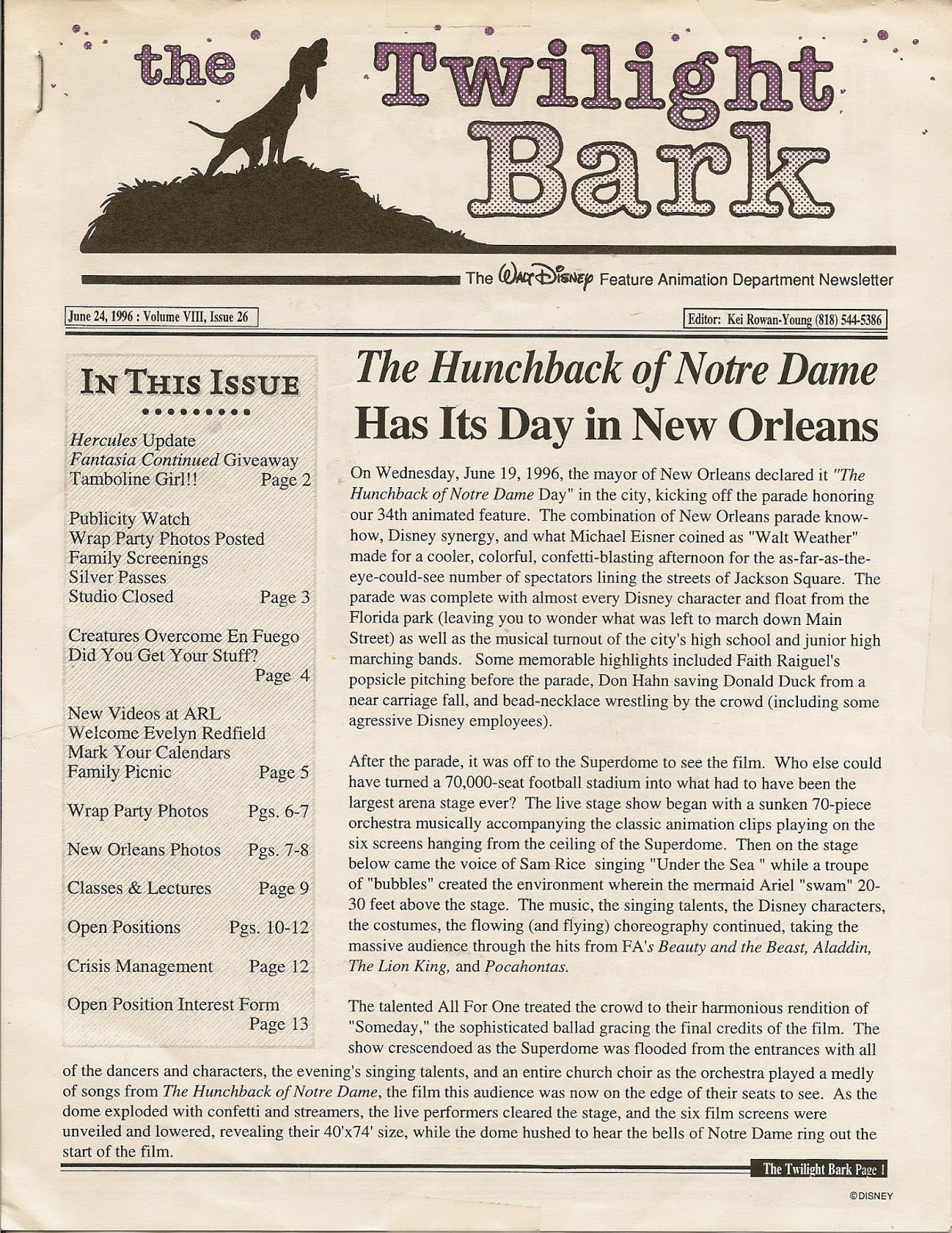 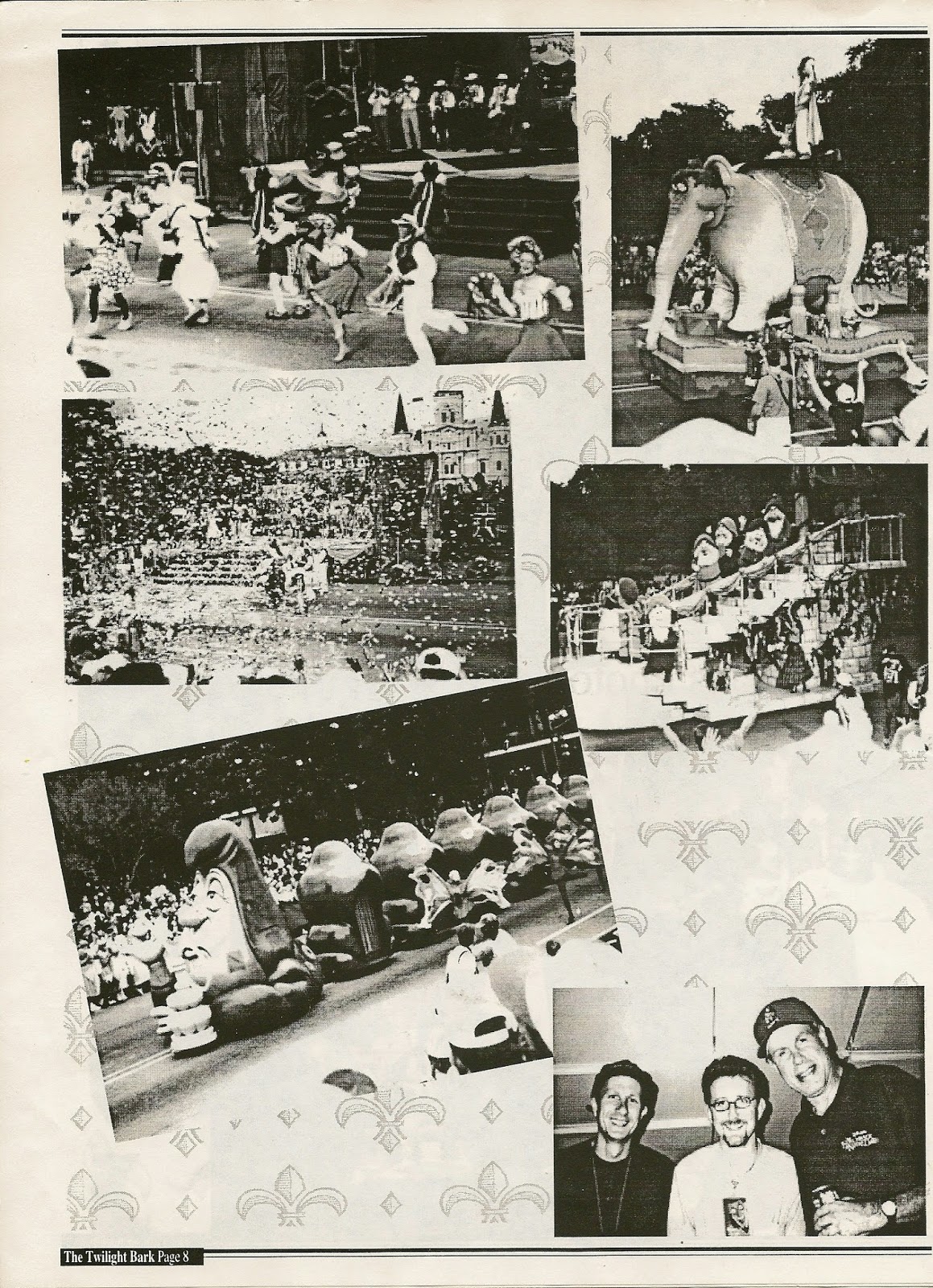 The month of June ended with a news article focusing on the contributions of African-Americans in the making of The Hunchback of Notre Dame. To some it may not seem like anything to make a fuss over, but there is not a lot of exposure to art in general in the black community. Sports and entertainment (singing, dancing etc.) yes. The Arts, no. Even in the sports field the list is short in certain arenas. Can you name a black swimmer? A black golfer, chess, rodeo? One or two at the most. 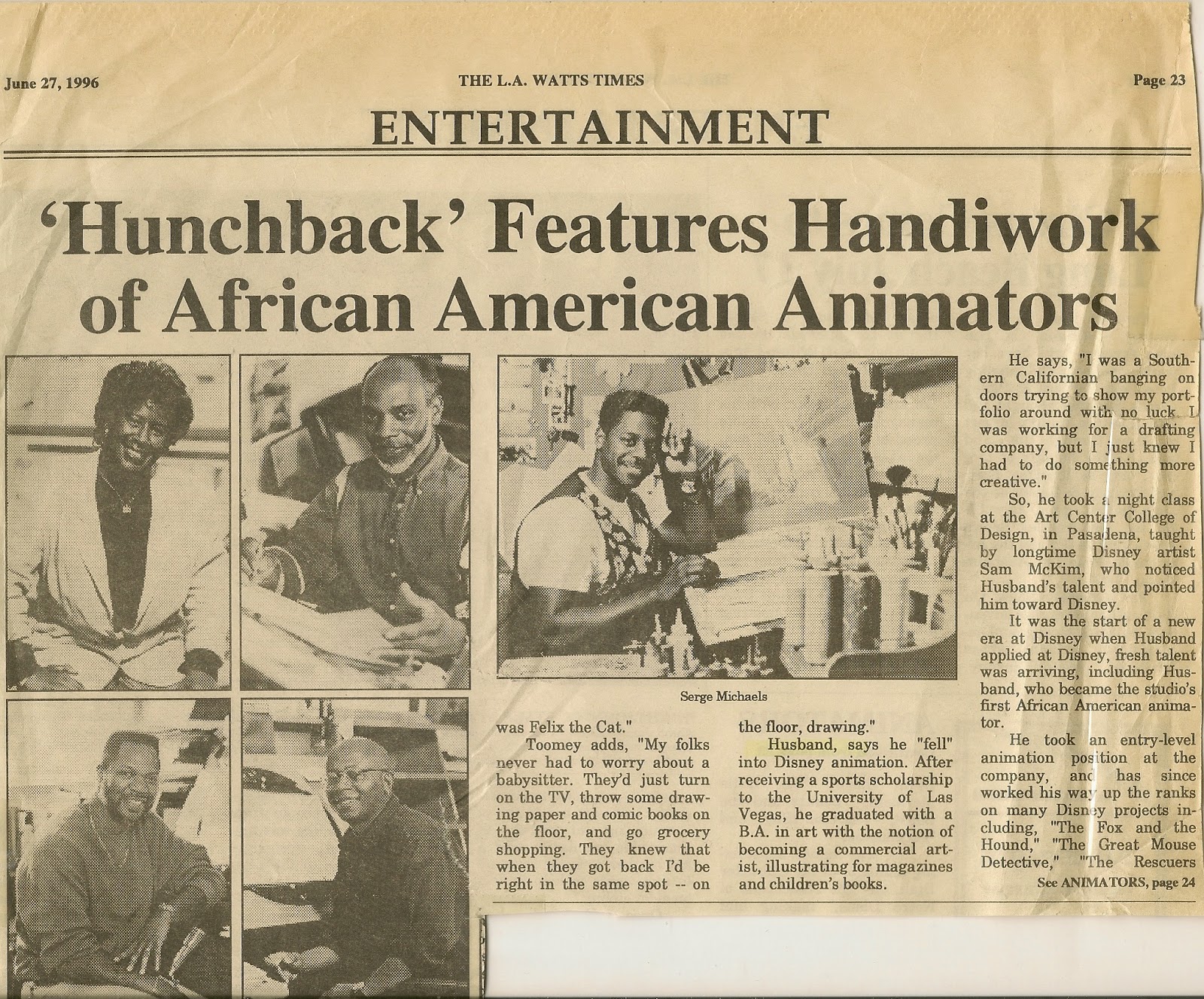 Exposure is one way to get the word out that there are avenues to creative careers in the arts to diverse communities.

Though we are all listed as animators in the headline, each one of us played a separate part in the production of the film.

Lillian Chapman in the clean-up department working on my character Djali.

Marlon West is credited with visual effects and
Marshall Toomey was Lead Key in the clean-up drawings of Quasimodo.

After all of the fanfare ushering in the production, the focus then becomes, "How well will the feature do at the box office when released? Will it make back production costs? Will it turn a profit? Can the studio afford to make another animated feature?

These are big questions that can only be answered by the public.  And the public did answer... 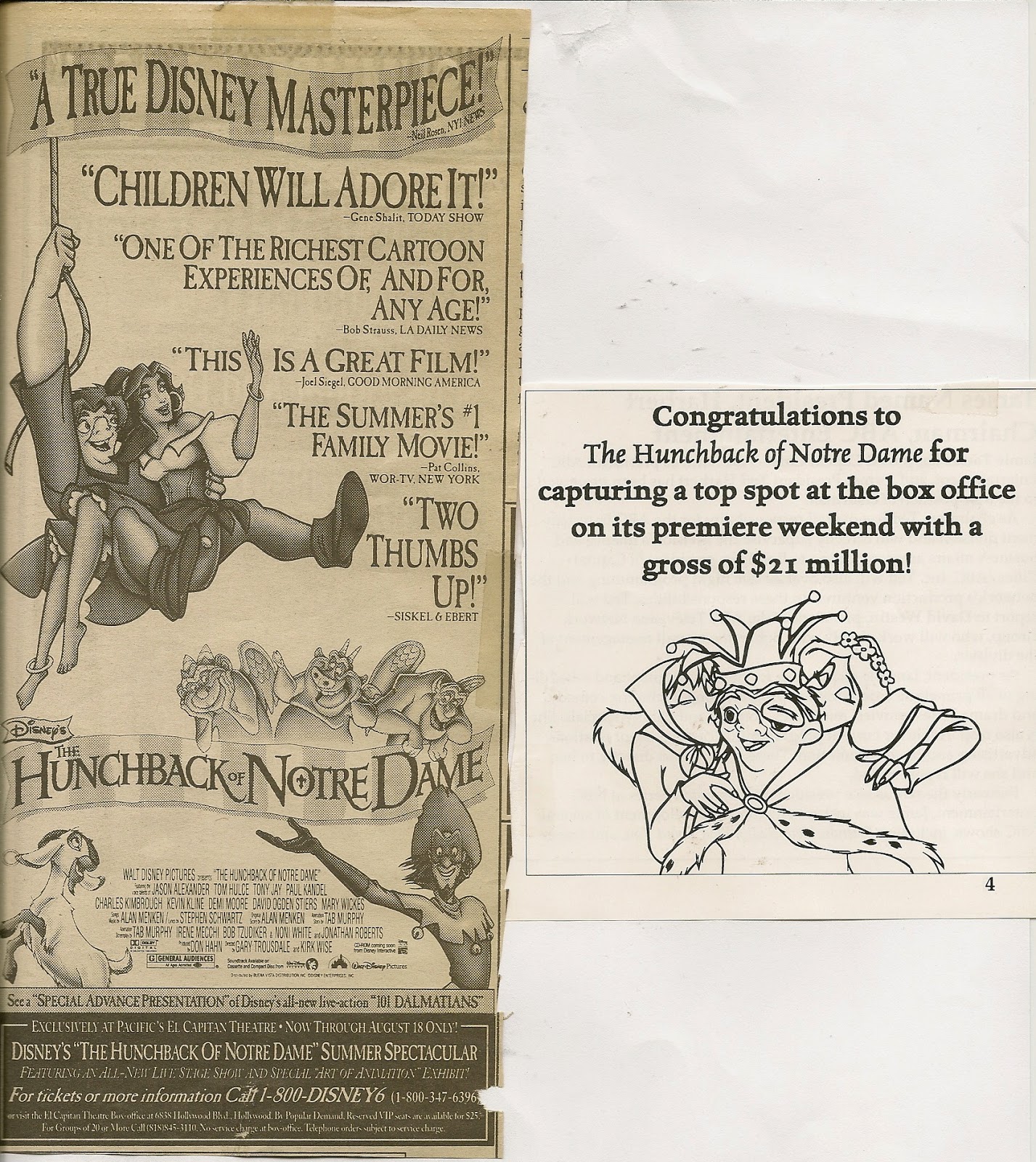 Seven months later we all celebrated the worldwide success of The Hunchback of Notre Dame. 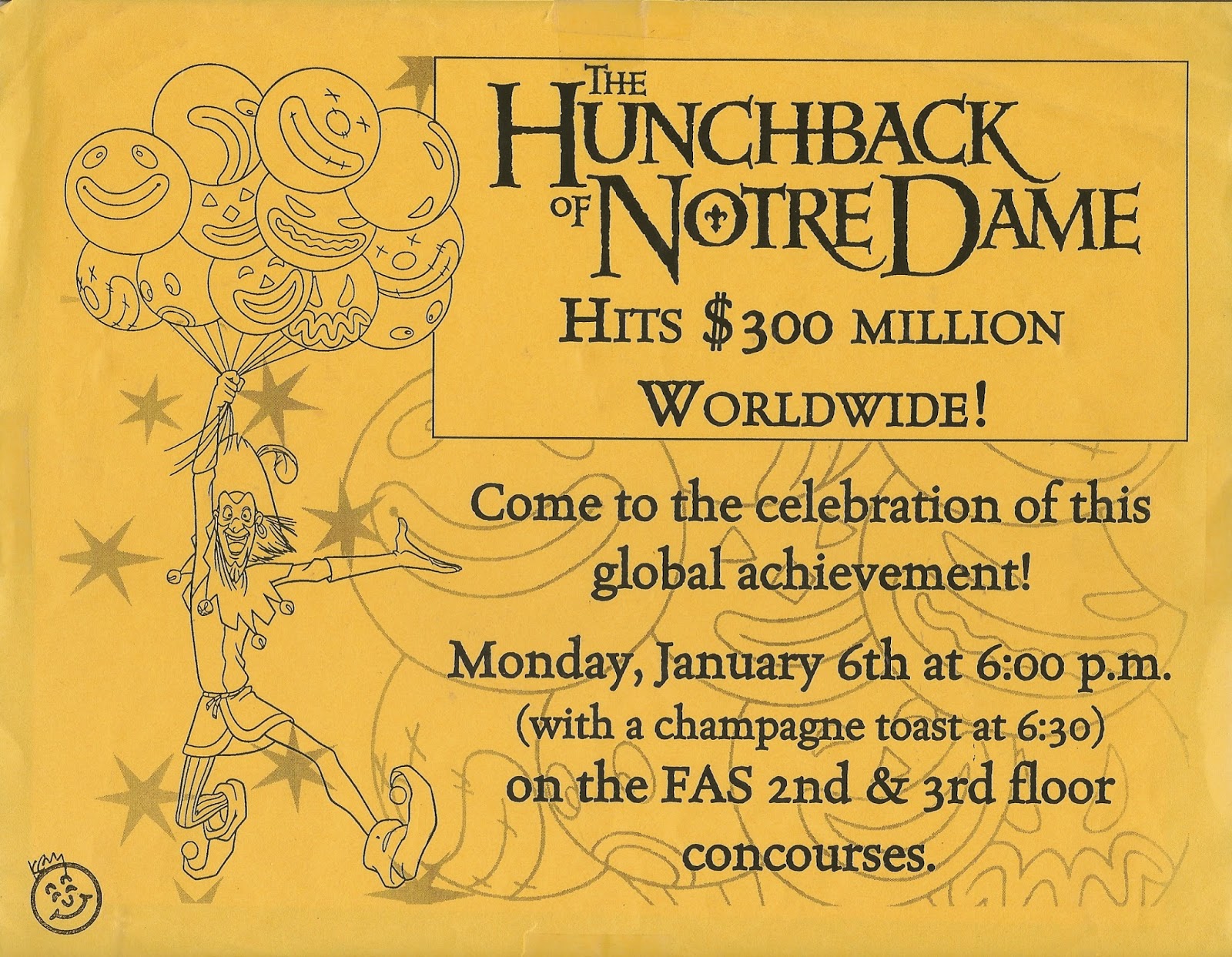 Everyone wants approval of what they do. Visual artists are no exception. We animators put our characters through an acting performance.  The question is, will the character's personality communicate to the audience and do so in an entertaining way as the story being told unfolds? We sure hope so...

Over the thirty years of animating at Disney I got my share of fan mail. This letter is from a family who attended the premier screening at the Superdome in New Orleans. 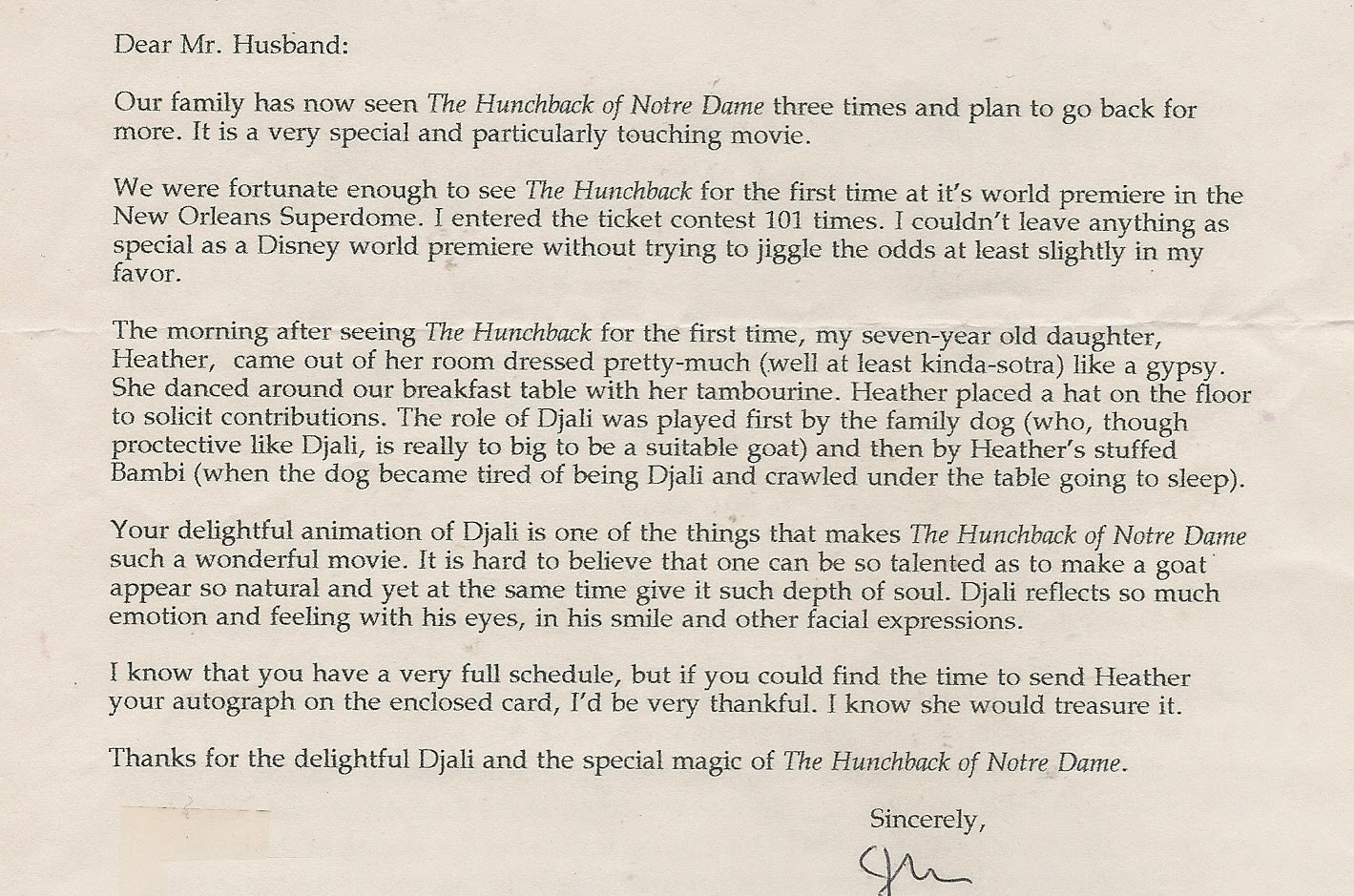 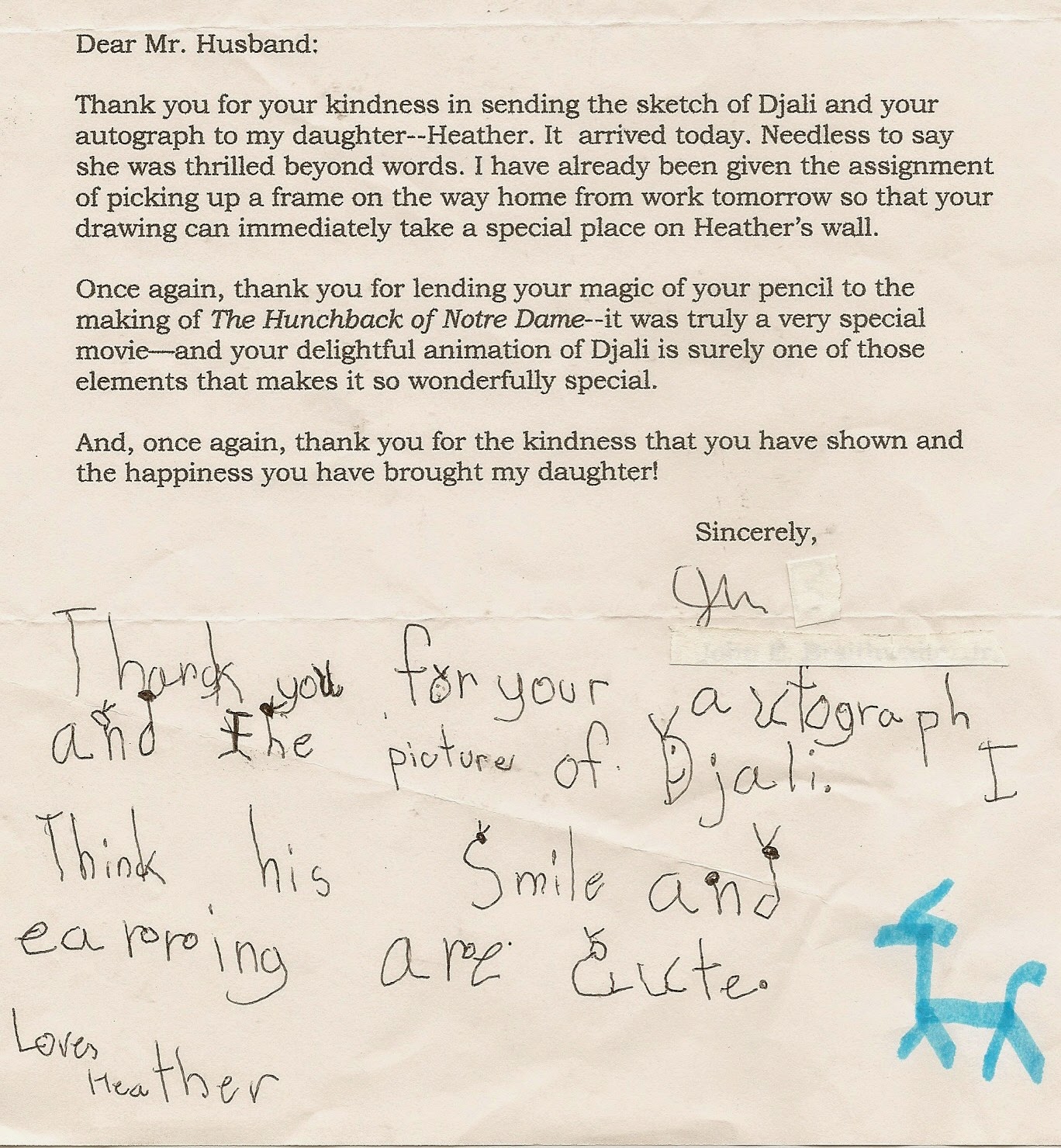 Regardless of the profession, one of the by products of a job well done is the positive effects it has on others.  I'm humbled and blessed to have had an opportunity to positively influence others via my art.
Posted by Ron Husband at 3:25 PM 2 comments: