The Hunchback of Notre Dame and more...part 1.

The animation department had been working on overlapping features. While Pocahontas was finishing up in our Glendale studio/warehouse, preliminary animation had been started on The Hunchback of Notre Dame, which would be completed in the new Hat building.

As Pocahontas neared completion, the weekly screening of Pocahontas 'dailies' (scenes that had been approved to be added to the movie)  started to include animation from Hunchback....

Hunchback had been in development for some time, as the artists worked out the story points, character design, color styling etc. 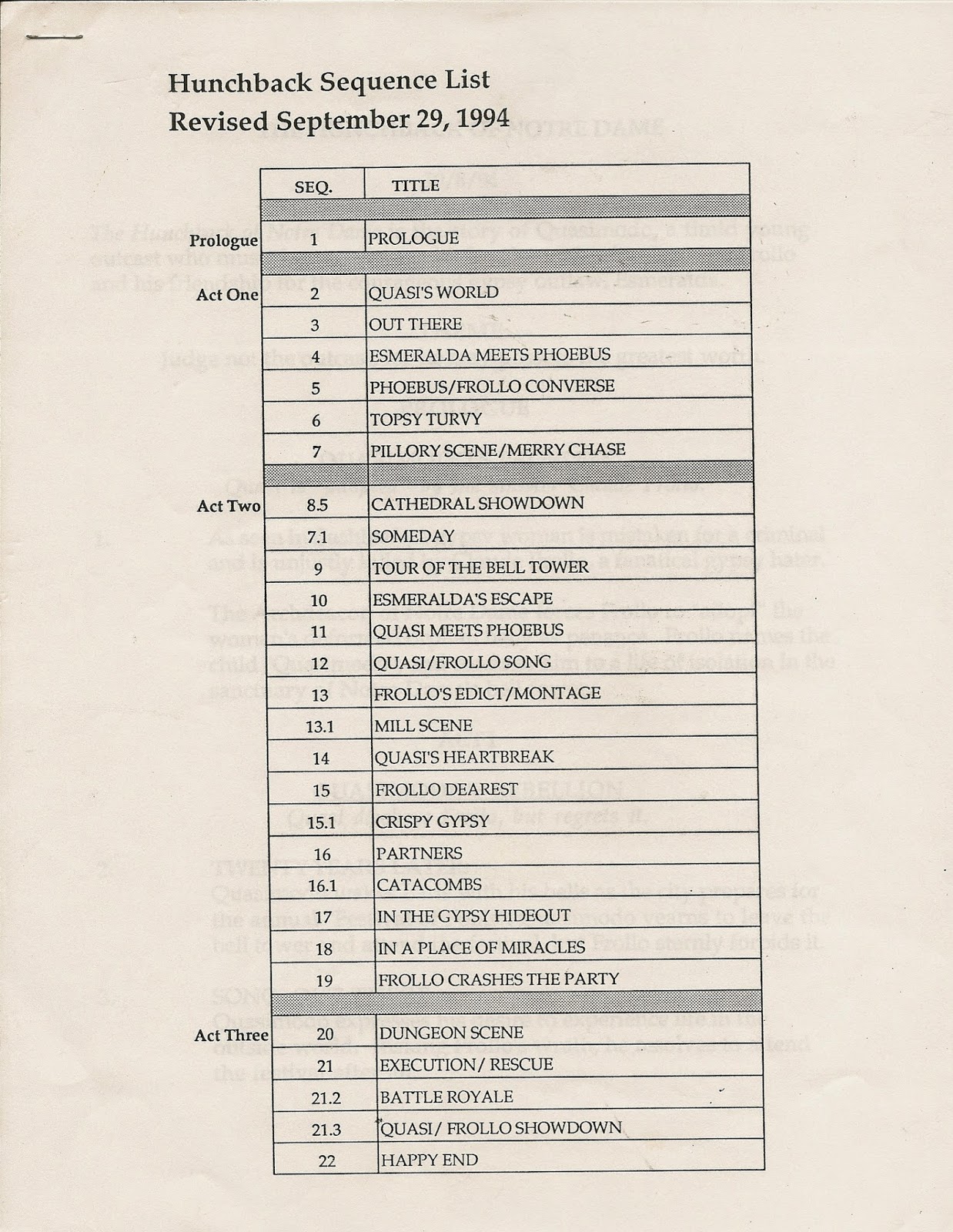 .
Having finished my assignment on Pocahontas, I had no idea where my next adventure in animation would lead to. As usual, I was waiting for the next production to call and add me to their staff of artists. 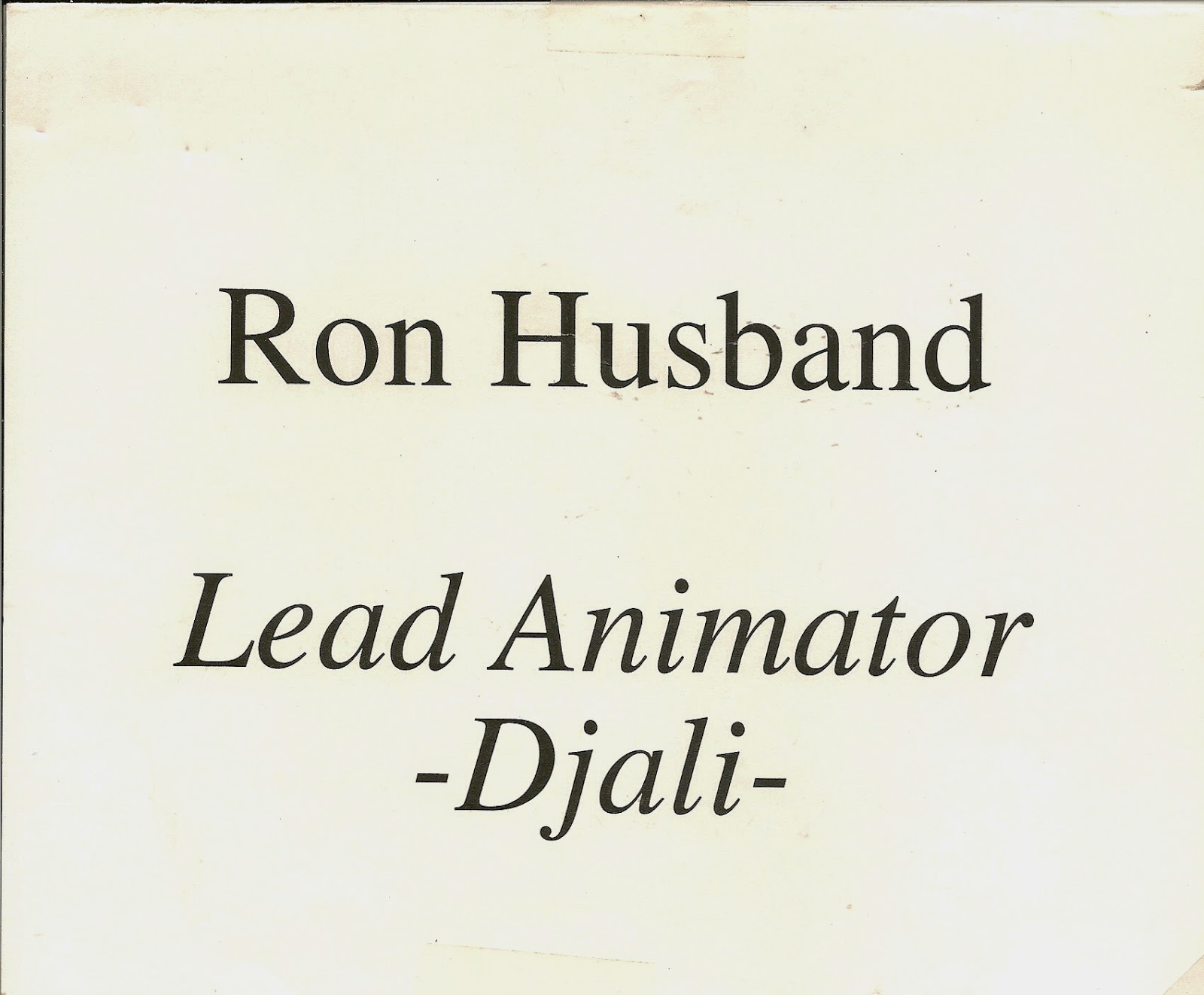 Then came the call...

Producer Don Hahn, and directors Kirk Wise and Gary Trousdale had made the decision to ask me to be the lead animator on Djali the goat, heroine Esmeralda's sidekick.   Lead animators were the first to do preliminary animation on their characters and set the style and character direction for the other animators in their unit to follow.

Wow, what an opportunity. Animators dream of being a character lead and I have had my share of dreams in this area, but didn't loose any sleep as this title eluded me over the years. I had been told by management early in my trainee period that I would never animate at Disney. After I had been promoted to an animator I was told, again by management that I would be assigned nothing but crowd scenes.

This promotion was the second time Disney studio history was made on my doorsteps. I was the first African-American to work my way through the inbetween, breakdown and assistant stages to be promoted to animator and now Disney's first black to be named a lead animator. In a few years there would be another link in this chain, I'll talk about that at another time.

It can be noted I was not Kirk and Gary's first choice to be the lead on Djali.  Veteran animator and multitalented  Ellen Woodbury  http://www.natureartists.com/ellen_woodbury.asp  was originally given the assignment. After animating a few scenes, she left Hunchback to take the lead on Pegasus in Hercules. This move on Ellen's part opened the door for me, a door I readily walked through.

Joining the production, one of the first things I did was read the script. There was not much Djali screen time (could this be the reason Ellen left?, I thought). Next I read the novel by Victor Hugo. Heavy, dramatic material with plenty of adult themes, and not the usual  Disney feature animation material. Animation Magazine ran an article subtitled 'How Disney Made Its Most Adult  Animated Feature' (June/July' 96).

It is the story department's responsibility to iron out all the details and have an entertaining story to tell through movement and music. My job was to bring forth a believable animation performance through my character, Djali. To do this I had to know the character anatomically and mentally.

The design for Djali had already been approved and as stated, some animation had already been done. I still needed to acquaint myself with goat anatomy and behavior. Research began at the studio and public libraries, and a few trips to the LA Zoo and then...

I took a day away from the studio and drove to Disneyland. Not to ride Pirates of the Caribbean, but to see, touch and sketch their goats. Just north of Big Thunder Mountain there is a Bar-B-Que dining area which is adjacent to a small petting zoo.

I made a call to the park, explained who I was and what my intentions were. Arrangements were made for me to arrive early before the park opened, enter through the employee gate and begin my observations. A few hours later, another step towards my goat education completed, I headed to the studio.

Working from the designs already done, sketches made from my visits to view live animals, viewing filmed footage of the Royal Lippazon Stallions and some early rough tests by Ellen, I prepared to give a lecture to animators, rough inbetweers and the cleanup artists who would be working on Djali. 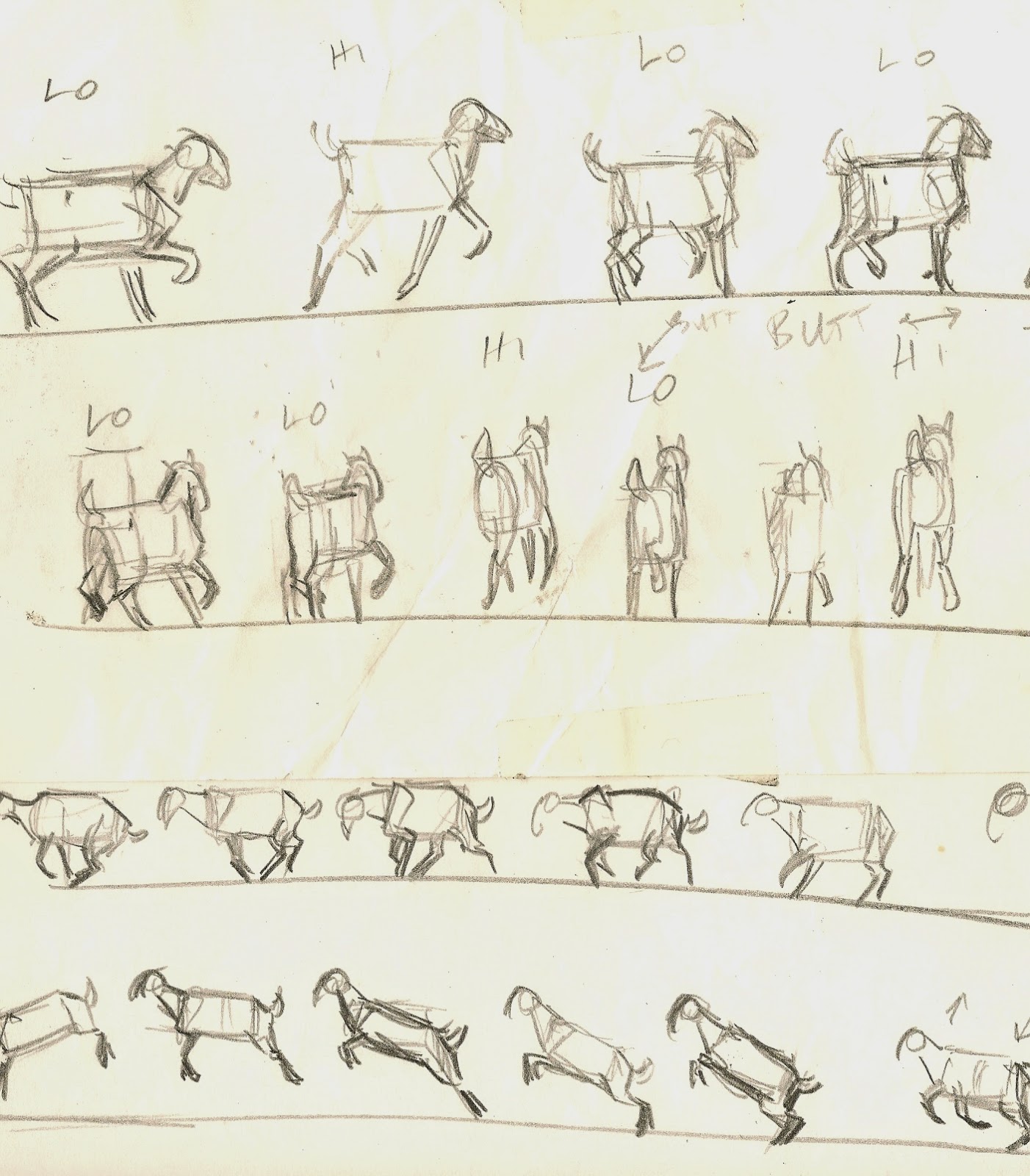 I did many pages of thumbnail sketches to familiarize myself with goat action... 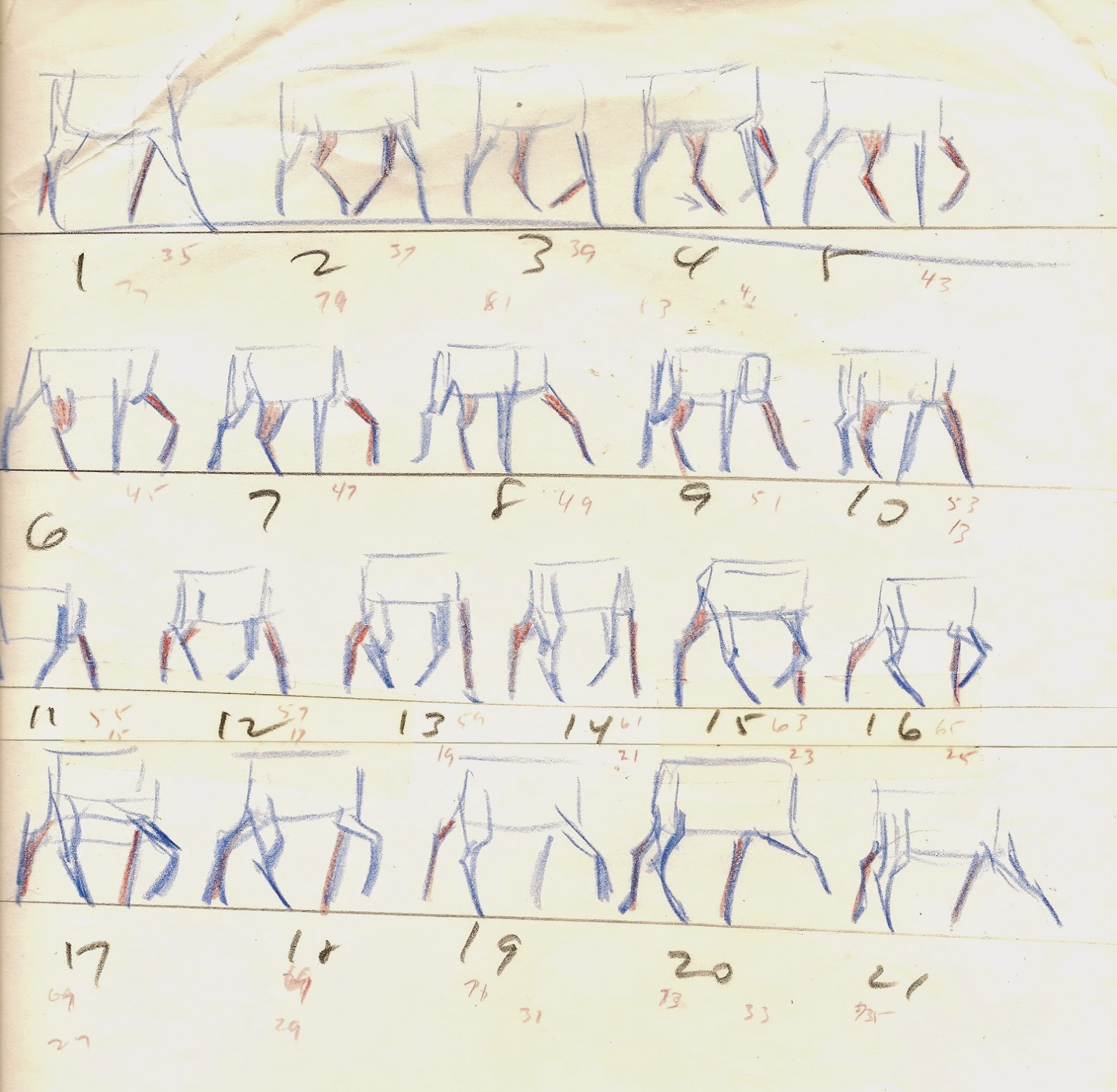 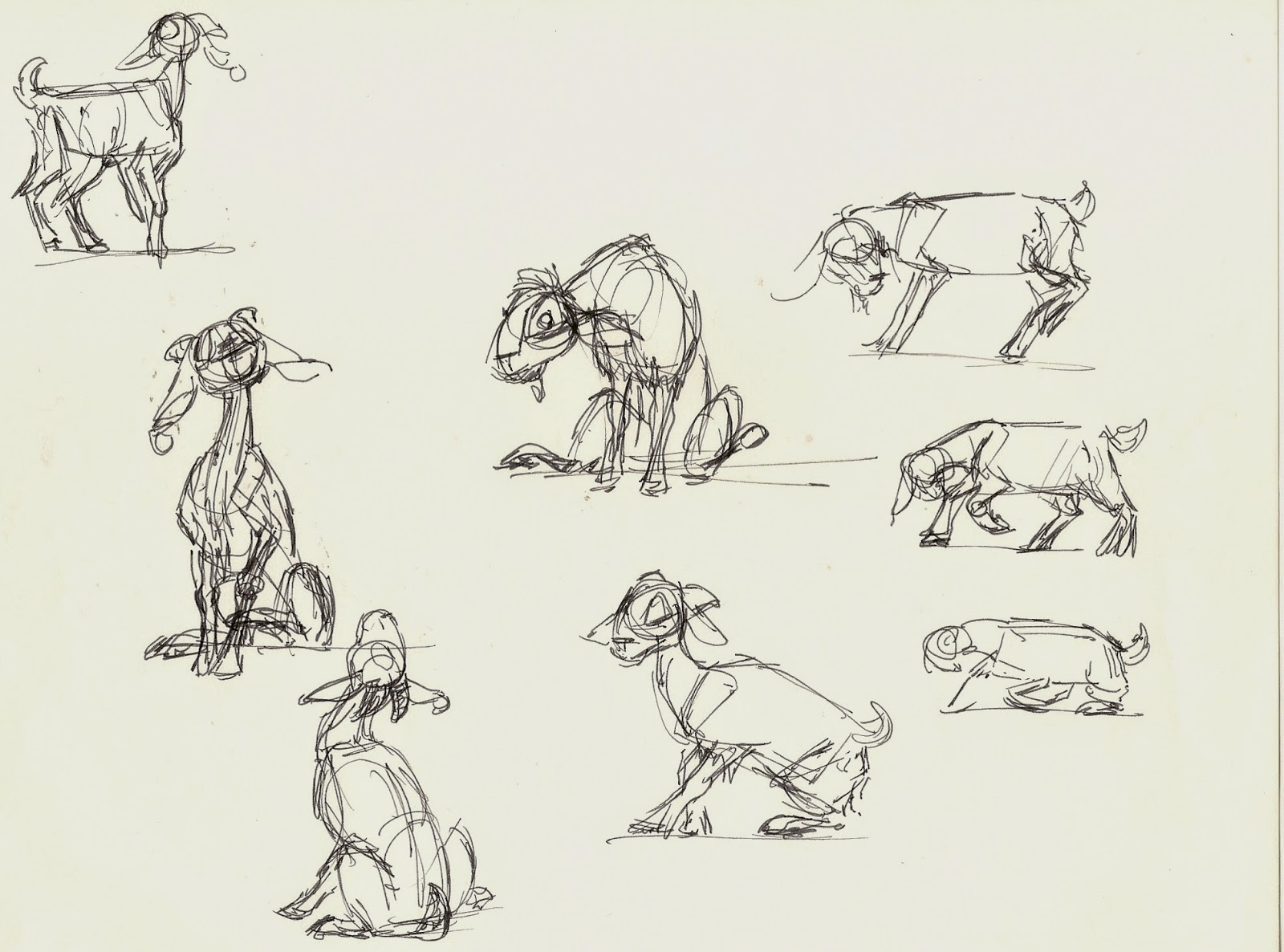