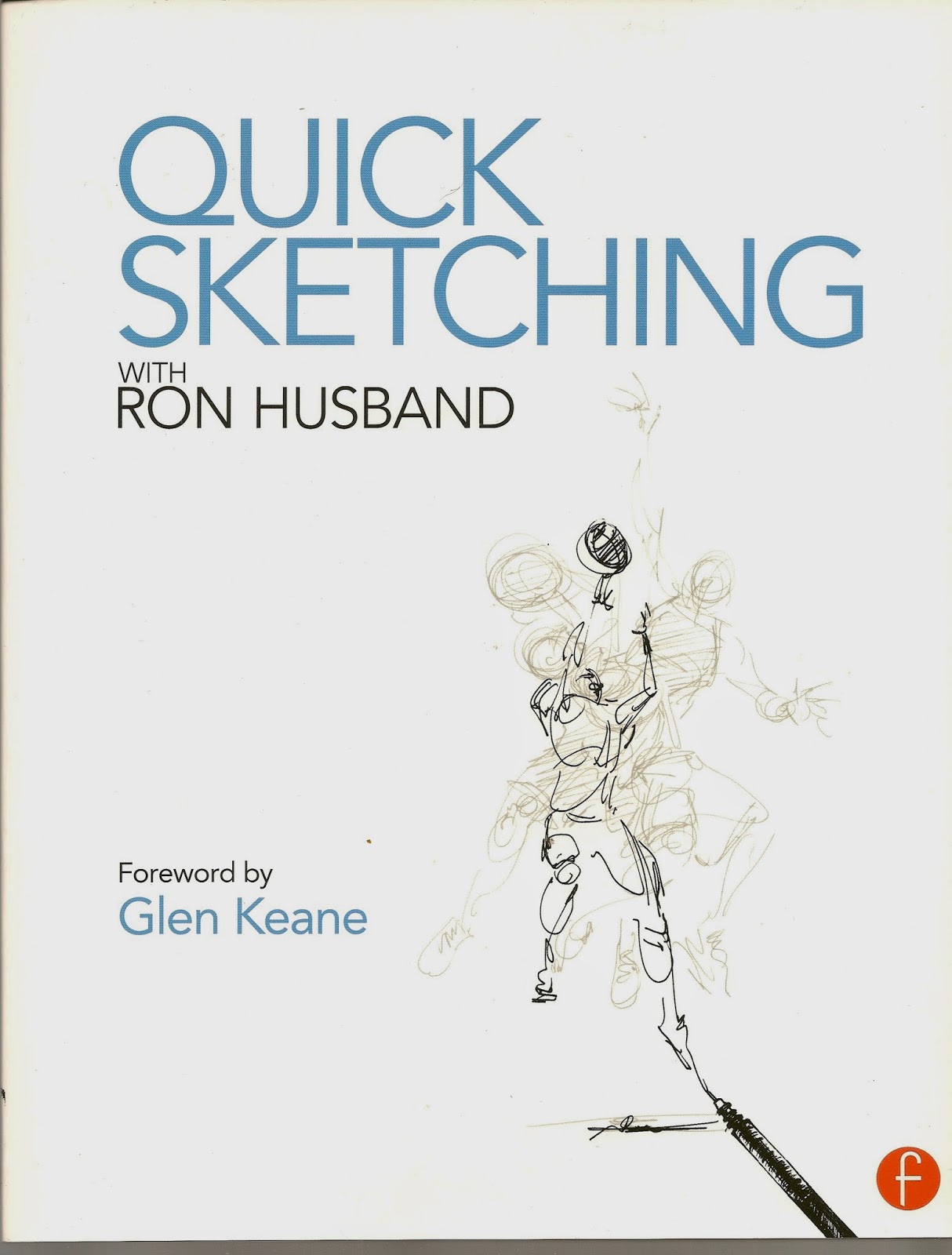 I wrote this book to inspire and encourage artists to draw more. There is no secret formula to "follow in ten easy lessons" to get better.
Take the talent you were born with and develop that talent through the discipline of daily sketching, but with the one ingredient that I guarantee will lead to improvement.  That ingredient is learning to sketch with a purpose. I set out in my writing to navigate a course that will lead to territory that the artist is already familiar with. It was not my intention to reinvent the wheel, (there are enough anatomy for the artist, assorted sketchbooks, how to... etc. already on the market) just make the artist aware of the principles they already know.
The artist is to take advantage of  the many drawing classes they have taken over the years and refocus on what was learned in those classes and to ask the question, what makes a good drawing? and setting out to answer that question through the sketchbook. What I call sketching with a purpose.

This challenge will take you beyond sketching for the sake of sketching. By understanding what makes a good drawing the artist is able to sketch with  purpose as he/she puts lines on paper. Lines which answer the who, what, when, why, where and how questions.

Want to know more?...consult Quick Sketching with Ron Husband
http://www.focalpress.com/books/details/9780415823340/
Which brings me to the main reason of writing this blog.
A few days ago my editor at Focal Press wrote in part "...the fact that we're moving to translations even before your book is a year old means that it's gaining traction and is quite a success."

Quick Sketching with Ron Husband is going to be translated to Japanese having been picked up by a publisher in Japan. Proving the basics of sketching are universal. 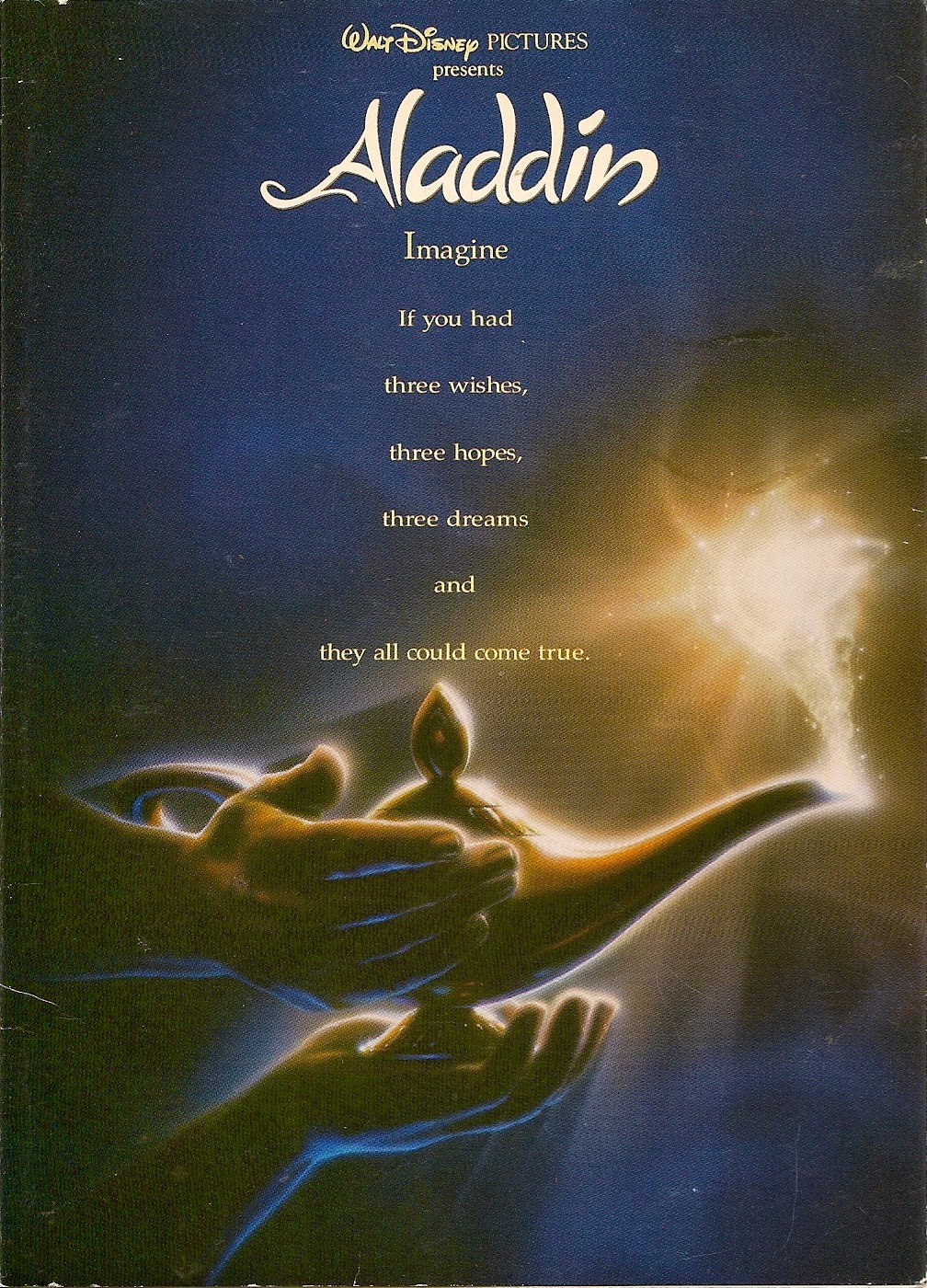 The Lamp and the Genie... 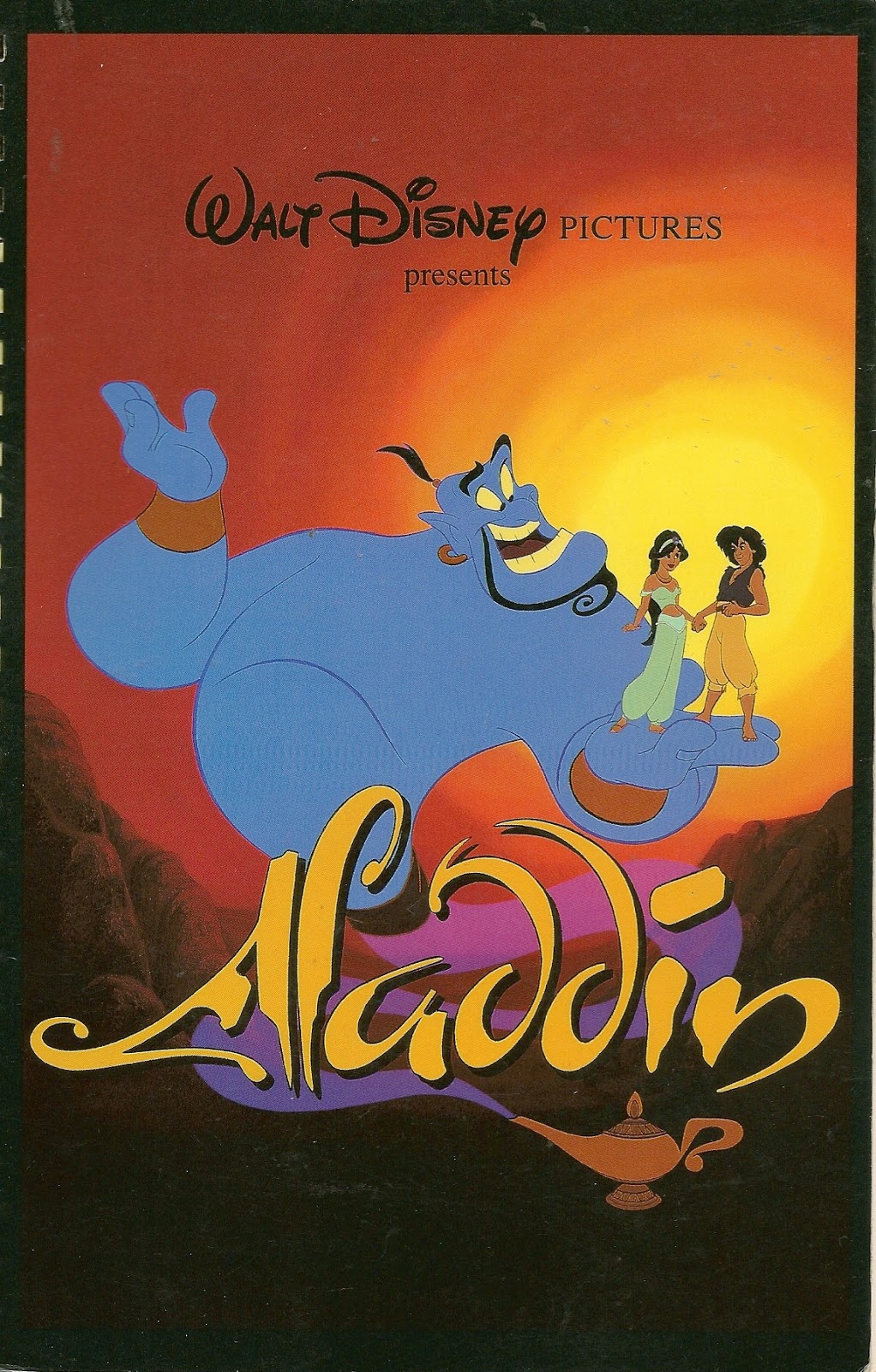 I worked on animation for the character Jafar (below) with the unit headed by Andreas Deja.

I cannot emphasize enough the value of thumbnailing a scene to work out the business/action before doing any animation.

Here are some of my thumbnails as an example:


I also had the opportunity to animate a few characters in the parade (below)...

and a few Aladdin scenes (below) with the lamp... 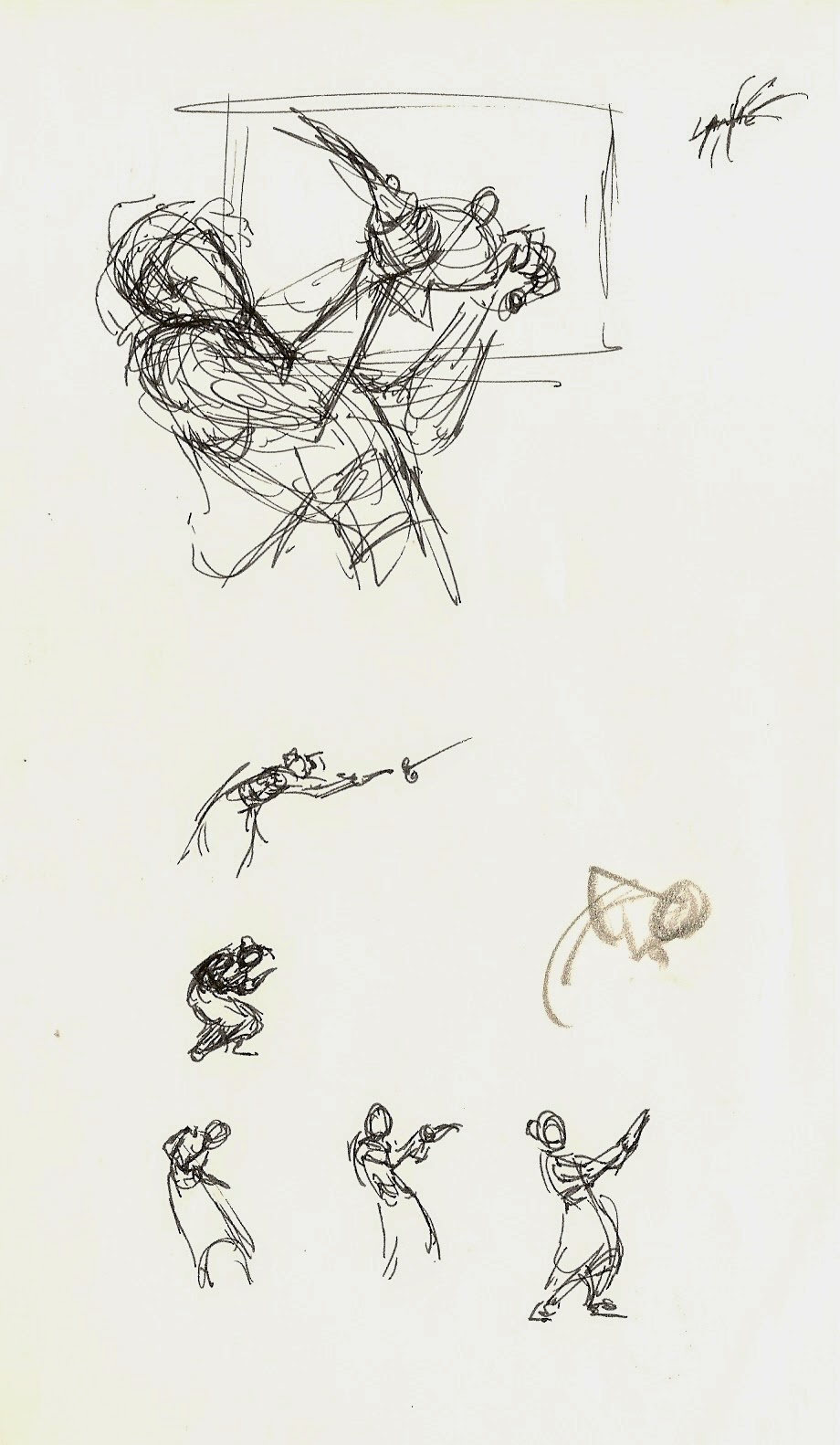 and Aladdin on carpet (below). 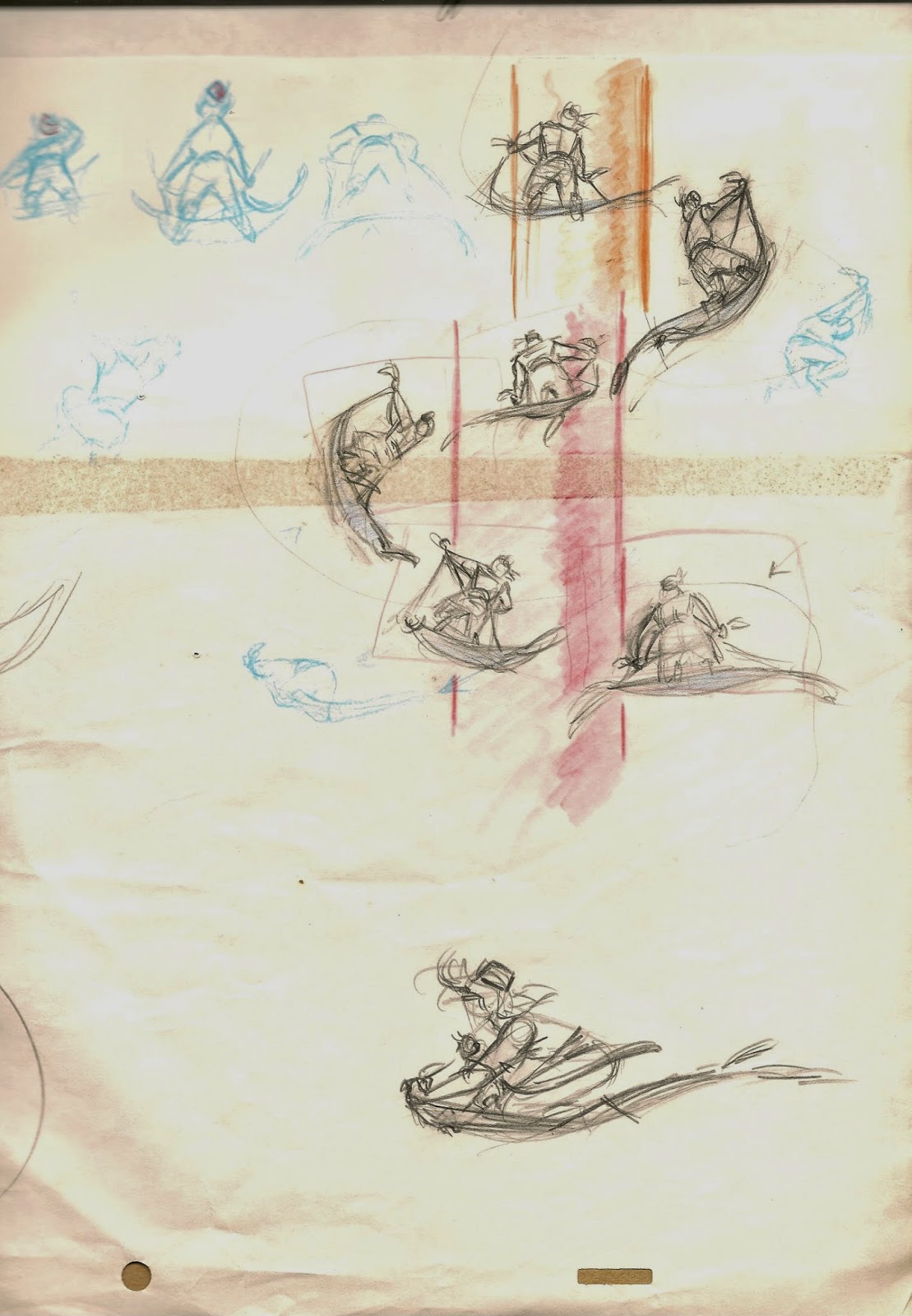 When animation is mentioned, some people immediately associate the animator as the star of the show, but it takes more than animators to get a feature to the screen.

The Directors harness all the talent to bring their vision to fruition...
﻿﻿﻿﻿﻿

Another important ingredient: the people who make up the story department...


Aladdin layout and background artists (below)... 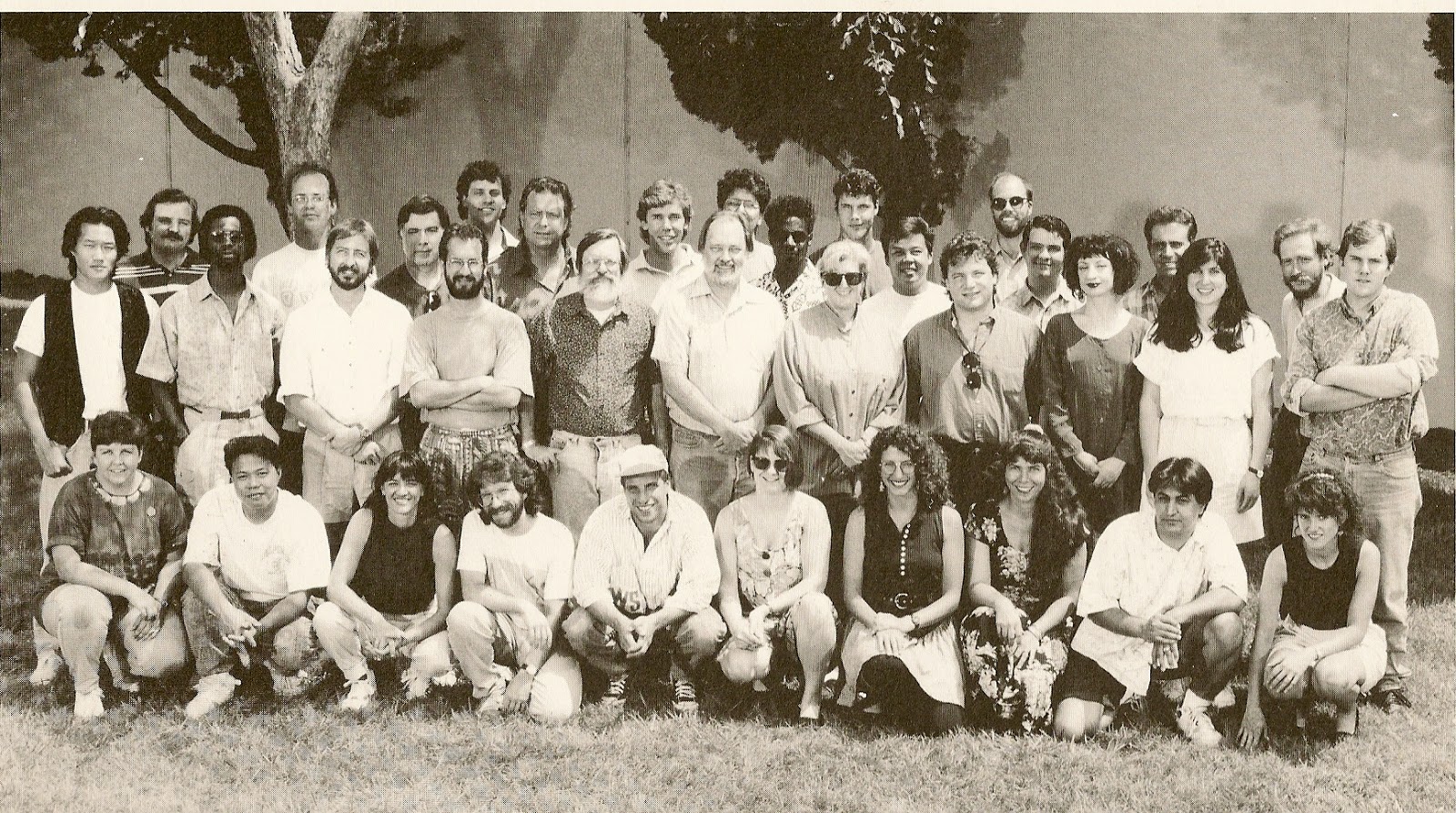 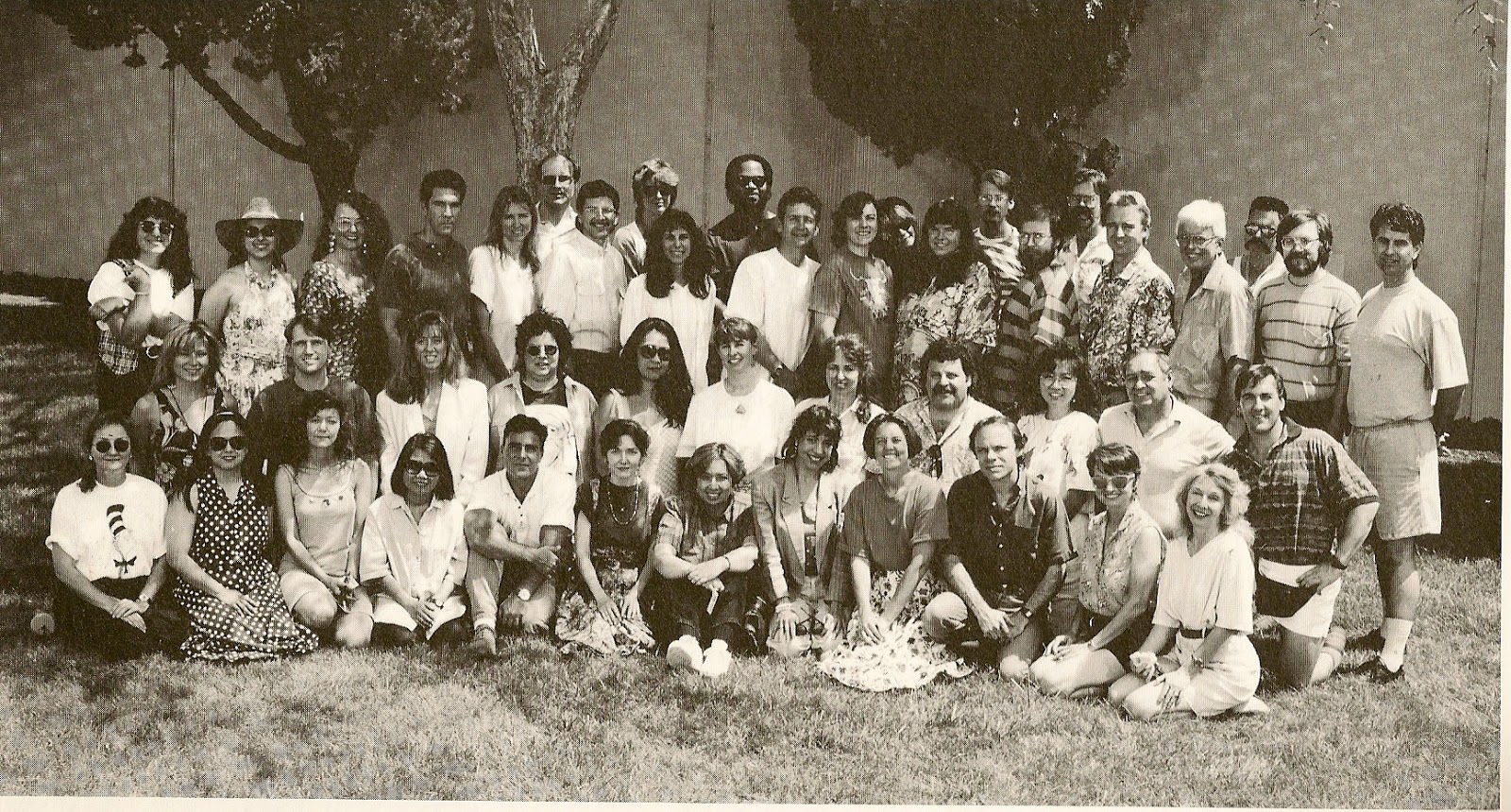 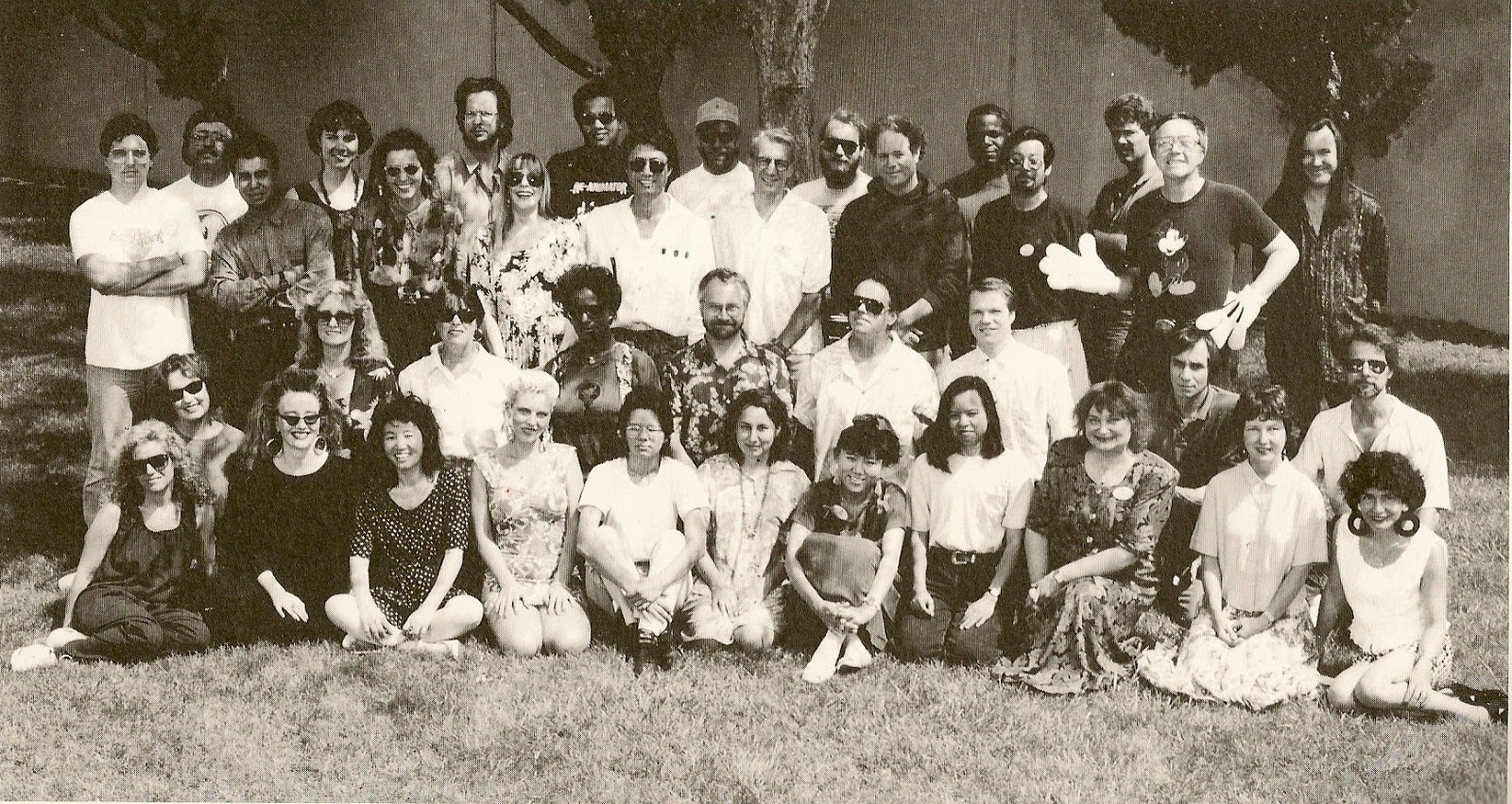 Aladdin effects and CGI artists (below)... 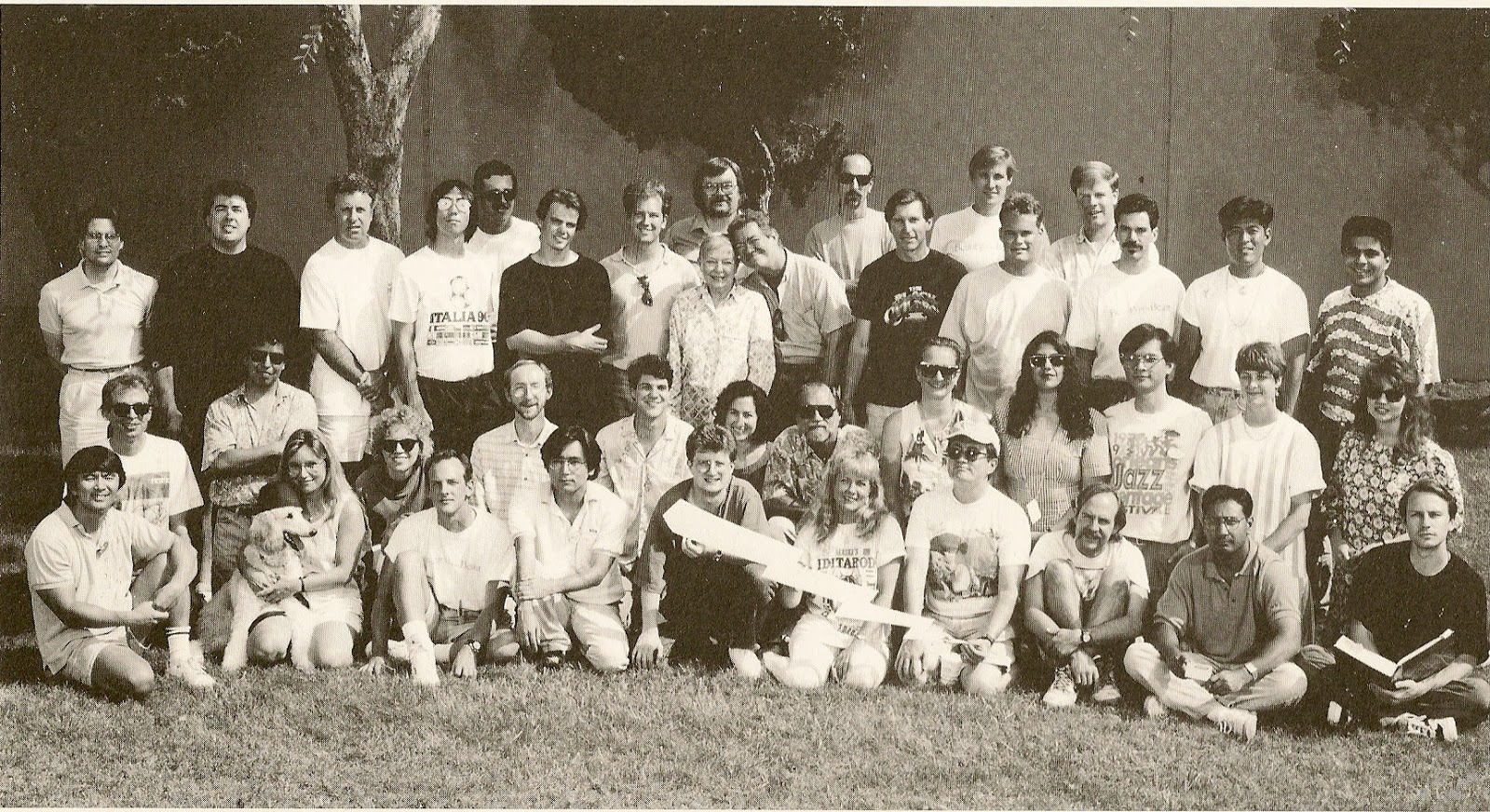 These and many more were responsible for the animated feature that made it to the screen.


As usual the cast and crew were treated to a screening at the El Capitan Theater in Hollywood followed by the now famous Disney Wrap Party. 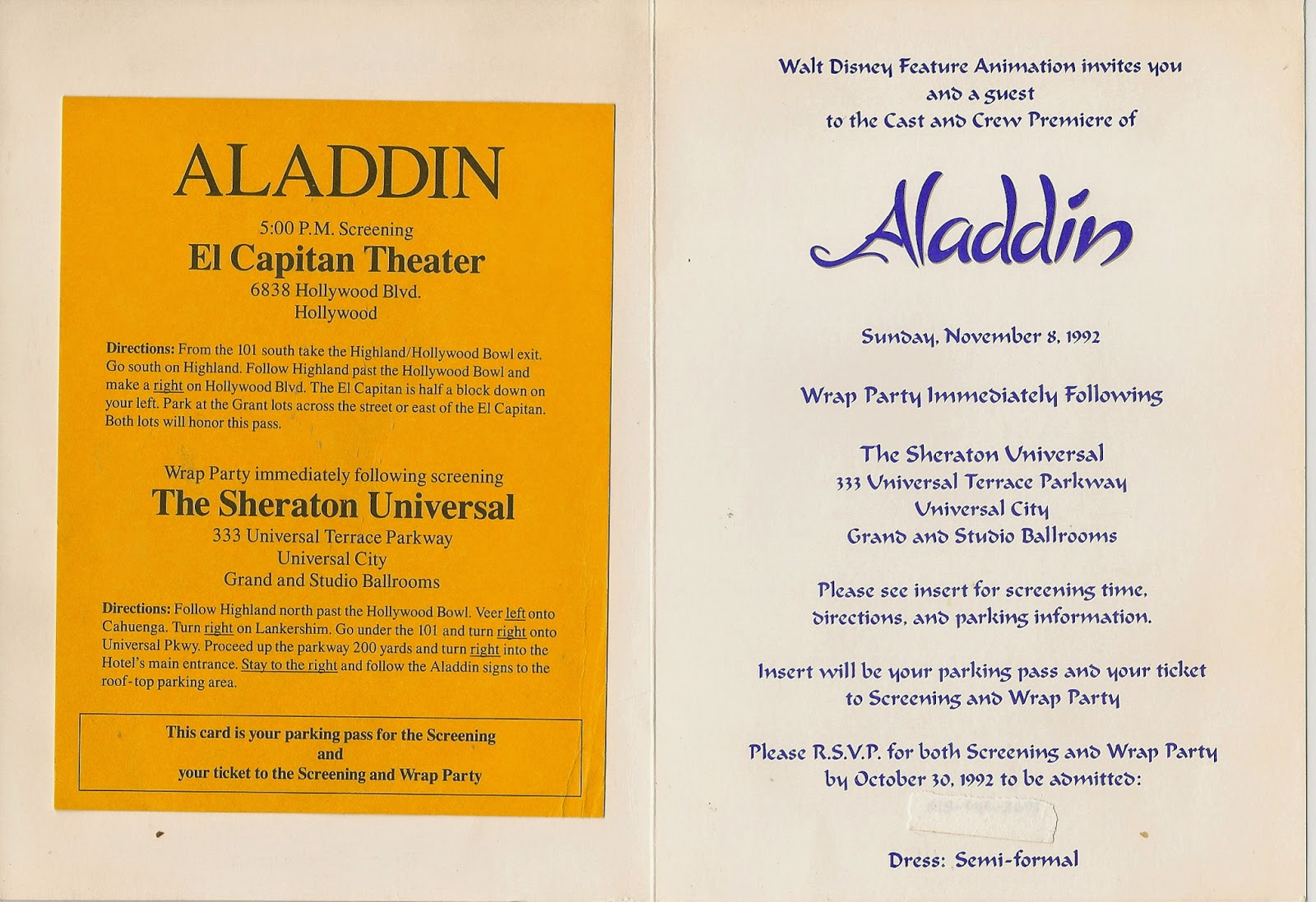 In the end it is the audiences who decide whether or not a film has been successful in it's attempt to entertain.

Five months later we gathered together as a group to celebrate Aladdin joining a handful of films that had surpassed $200,000,000 and the only animated film to do so at the time. 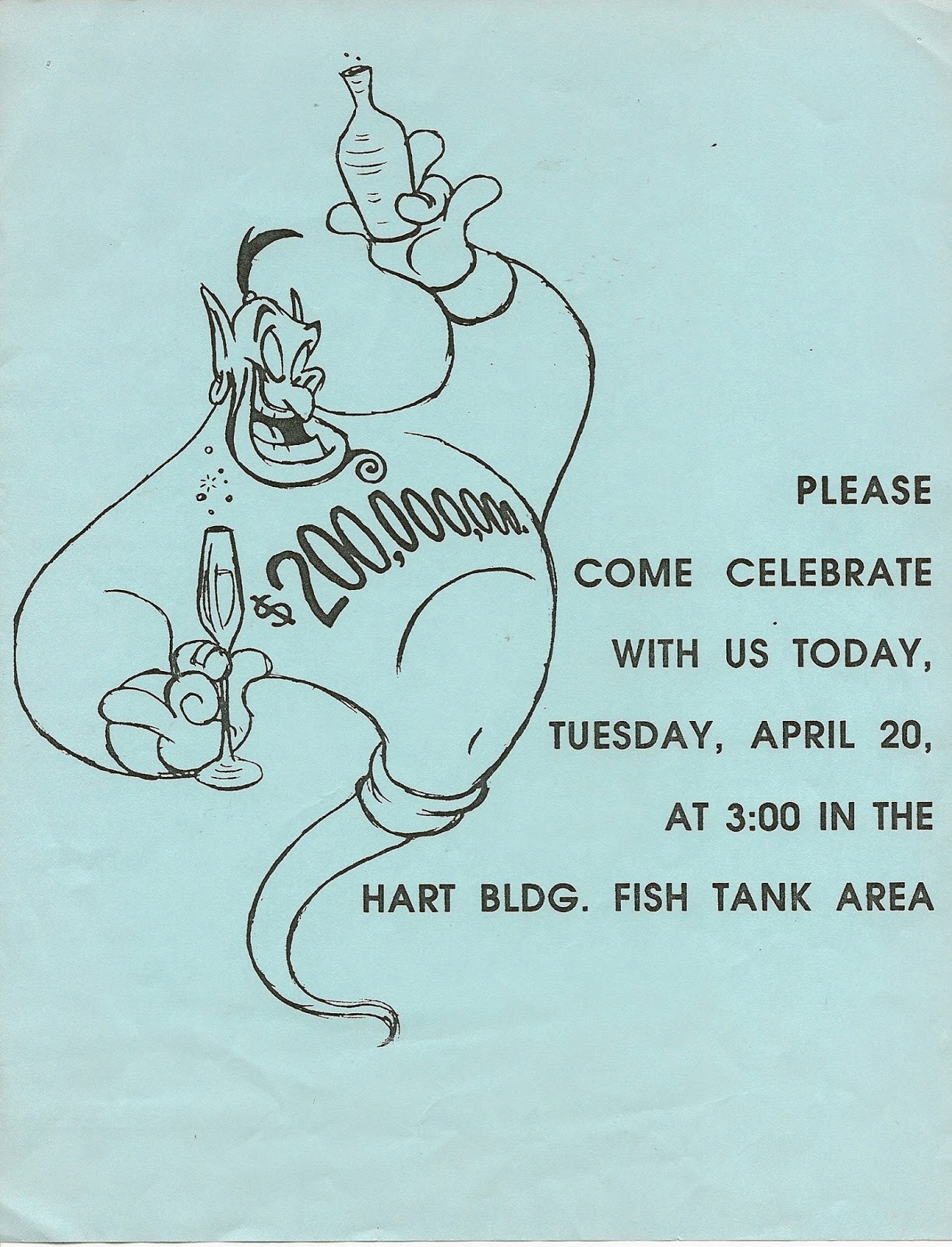 At this time Disney animation was on a positive upward spiral. Check out Don Hahn's documentry 'Waking Sleeping Beauty' to get a behind the scenes look at this era.


(photos by WDP for inspiration and encouragement)

My last topic of discussion was a continuation of Planning a Scene ... 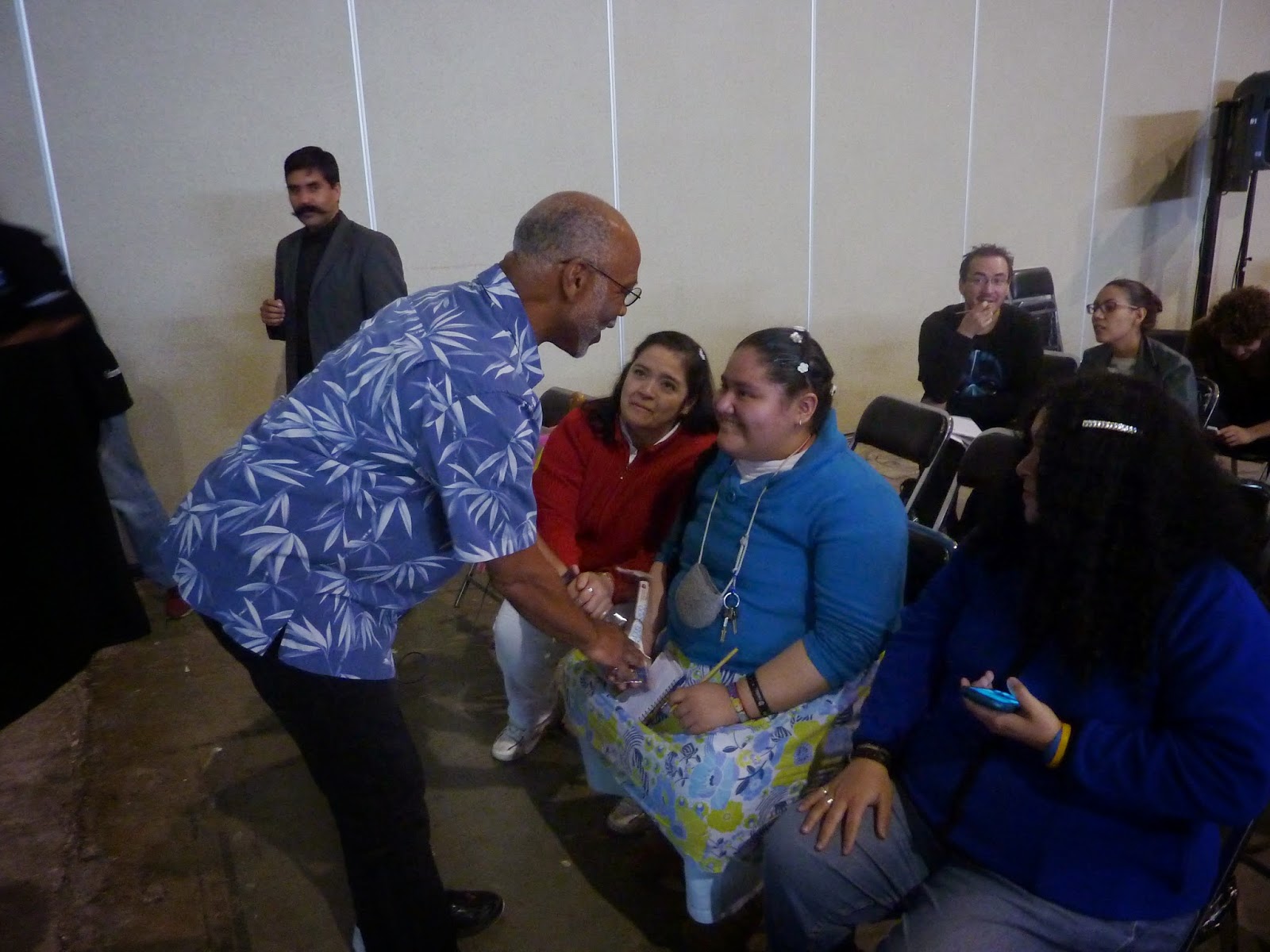 Before I got started I stepped down from the stage to formally introduce myself to three young ladies who had attended every lecture and got there early so they could sit in the same seats up front.

Though there were other activities and booths going on at the same time, they chose to hear what I had to say. I thanked and told them I appreciated their choice. 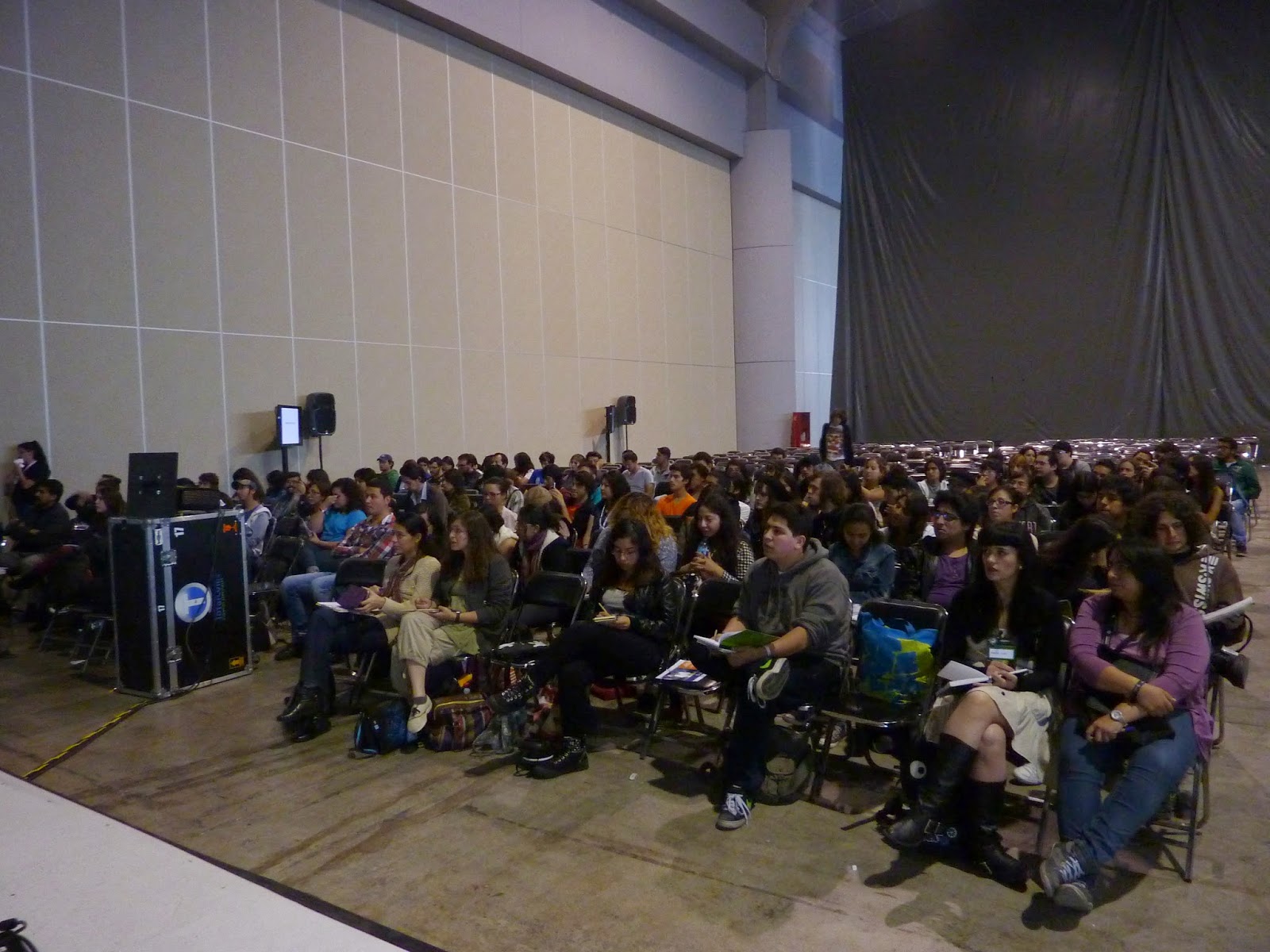 The audience got a lesson on, Components of a "Good" drawing, Knowing your Character, human and animal anatomy, and dialogue with the director.
As a demonstration, I animated a four legged animal running and... had the opportunity to do some drawing. 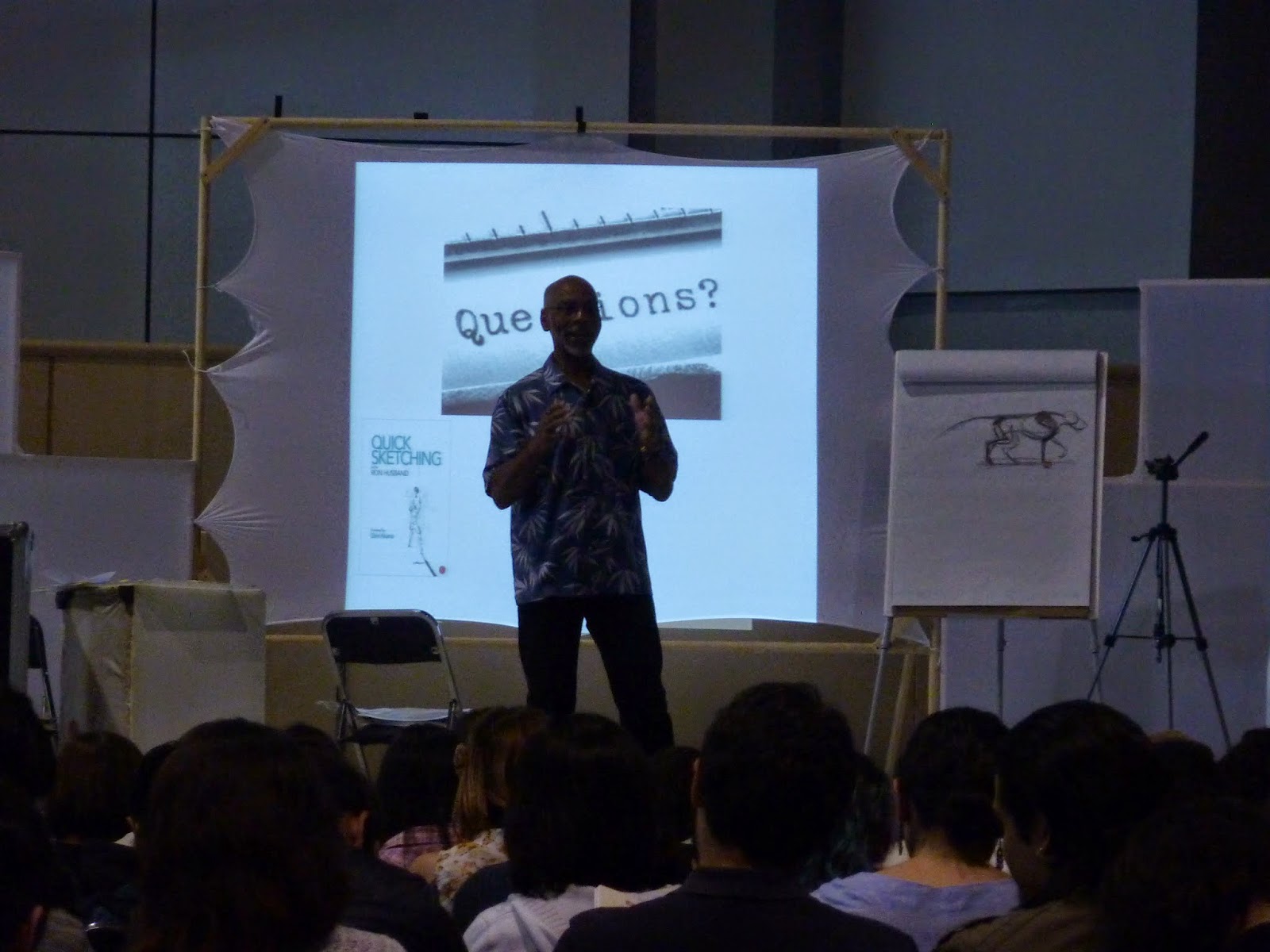 Followed by our (by this time customary) question and answer session.
This last session of the day closed out the Epic Live Entertainment Creativa Fest: International Animation Festival 2014.  After a few more autographs and selfies,  I made my way through the exposition hall to taxi back to the hotel for a room service meal and to bed.

After packing for home and getting a bit more rest in my hotel room awaiting my late flight, I got a call from my hosts inviting me out to see some more of Mexico, "See you in the lobby in a few minutes".

Group shot in the lobby...


We all boarded a Cadillac SUV and headed toward downtown Mexico City. Elizabeth suggested we stop in Coyoacan before entering downtown.  This way I would get a feel and taste of real Mexico.
On our way we saw some real interesting characters.
When the cars stopped at the red light to let people cross, salesmen walked between the lines of autos selling their wares.

At another intersection a gentleman dressed in native south American costume danced between the line of cars and money was handed out the car windows to him.

What caught my eye when we stopped at another crosswalk was a guy in a suit pushing a small fish tank to the middle of the crossing area. He stopped, held up his empty hands, put them both in the water filled tank and swished the water around signaling there is nothing in there.
Then he removed his wet hands, thrusting them into the air showing them to be empty.
He then put them back into the tank, pulled his two hands out of the water holding a wet dove above his head and then separating his hands producing a dove in each hand...boy was I glad I had my sketchbook in hand. 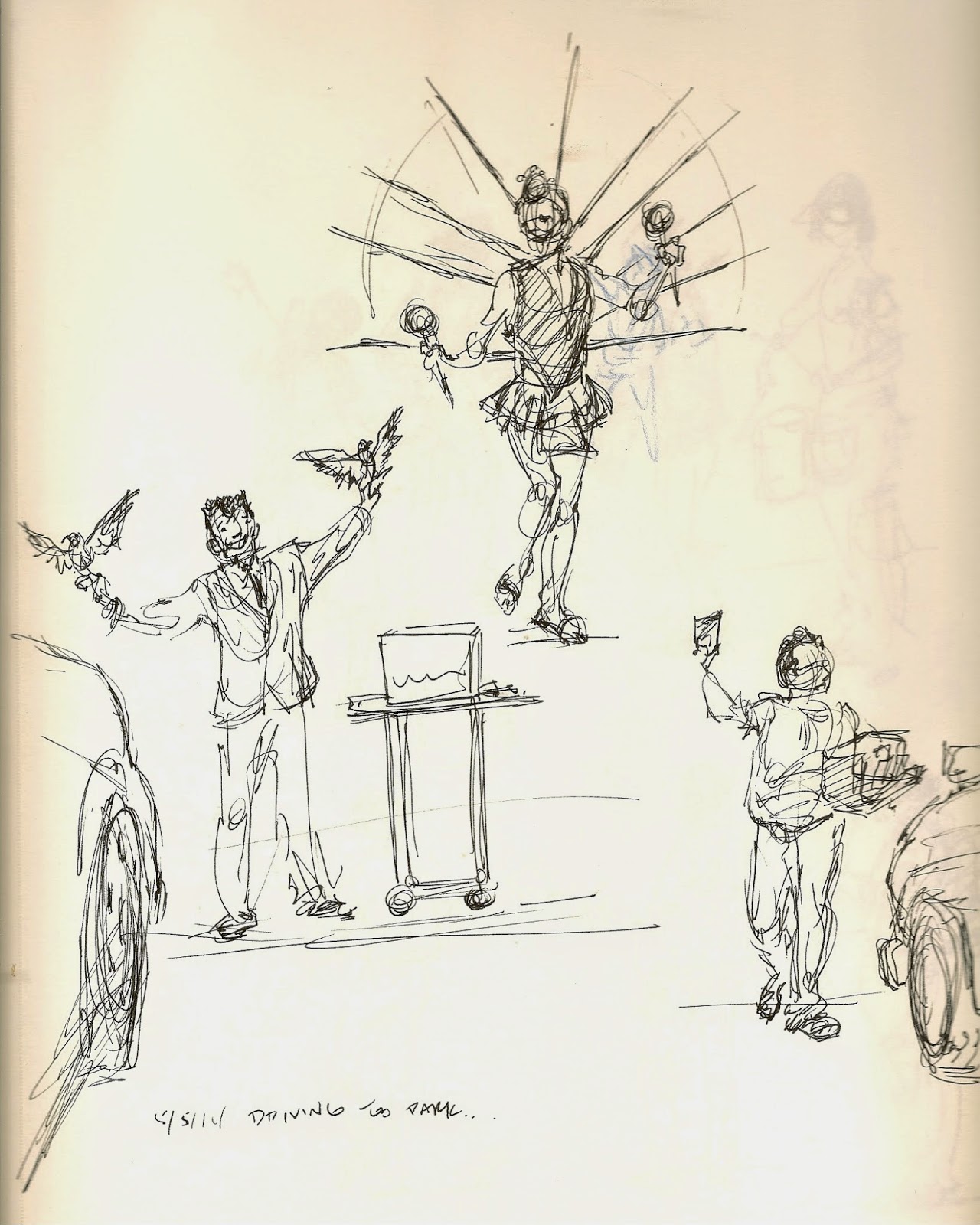 Next stop: Coyoacan Park...
These park musicians were about to end their music and I had to sketch quick enough to get the basic gestures of the four before we left.  (top sketches, below).
Later in another part of the park we saw them again and I got to 'flesh out' my earlier  sketch (below, bottom sketches). 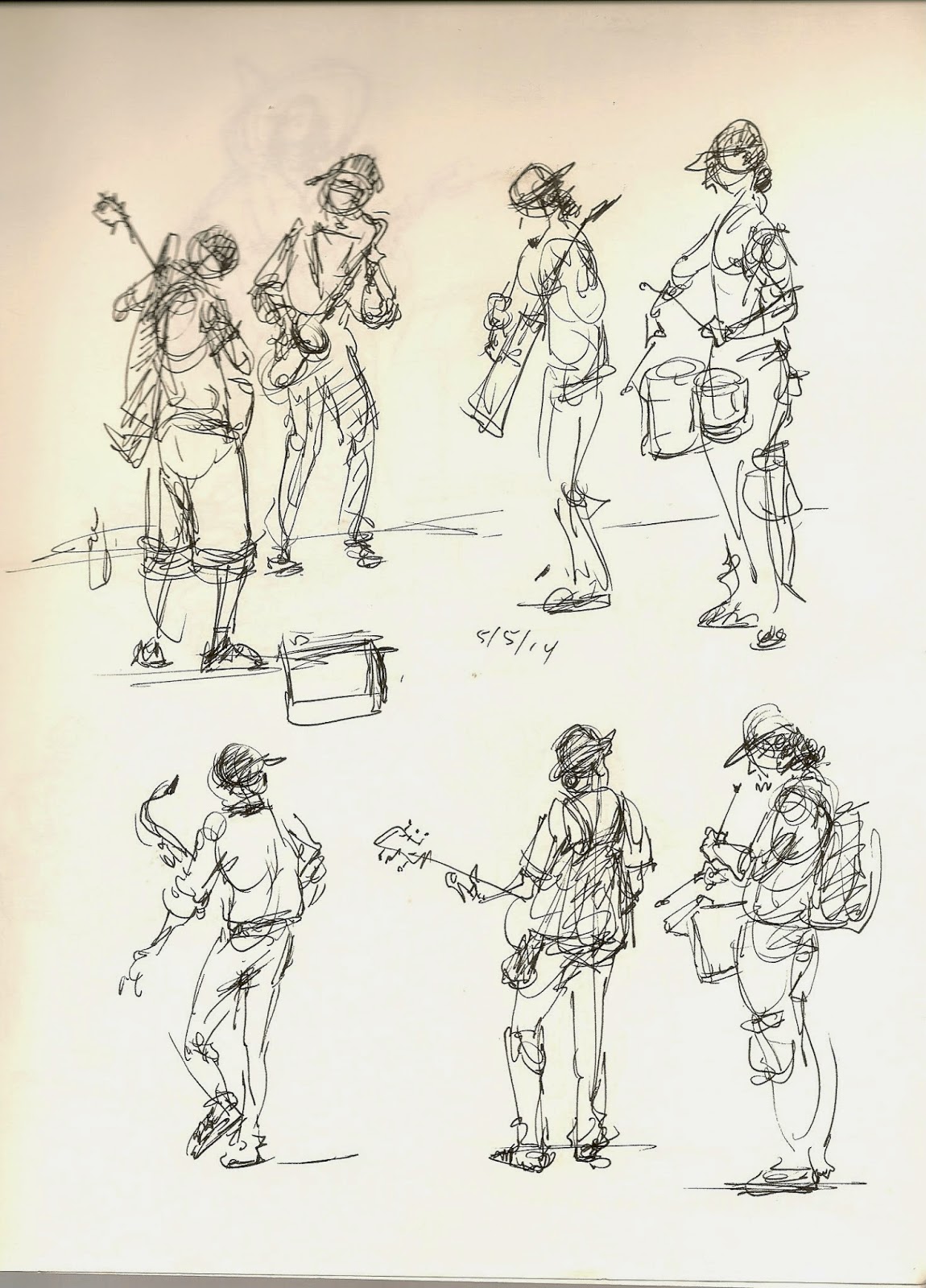 We made our way through the park toward the Frida Kahlo Museum. Unfortunately the museum was closed that day but we passed an open air market which seemed like it took up a whole block.
There was everything one wanted to buy: meat,fish toys,candy,clothes,spices,fruit - you name it, you could find it.


My pen was able to capture some wonderful sketches of vendors, musicians and a man just relaxing and enjoying the calmness of the park. 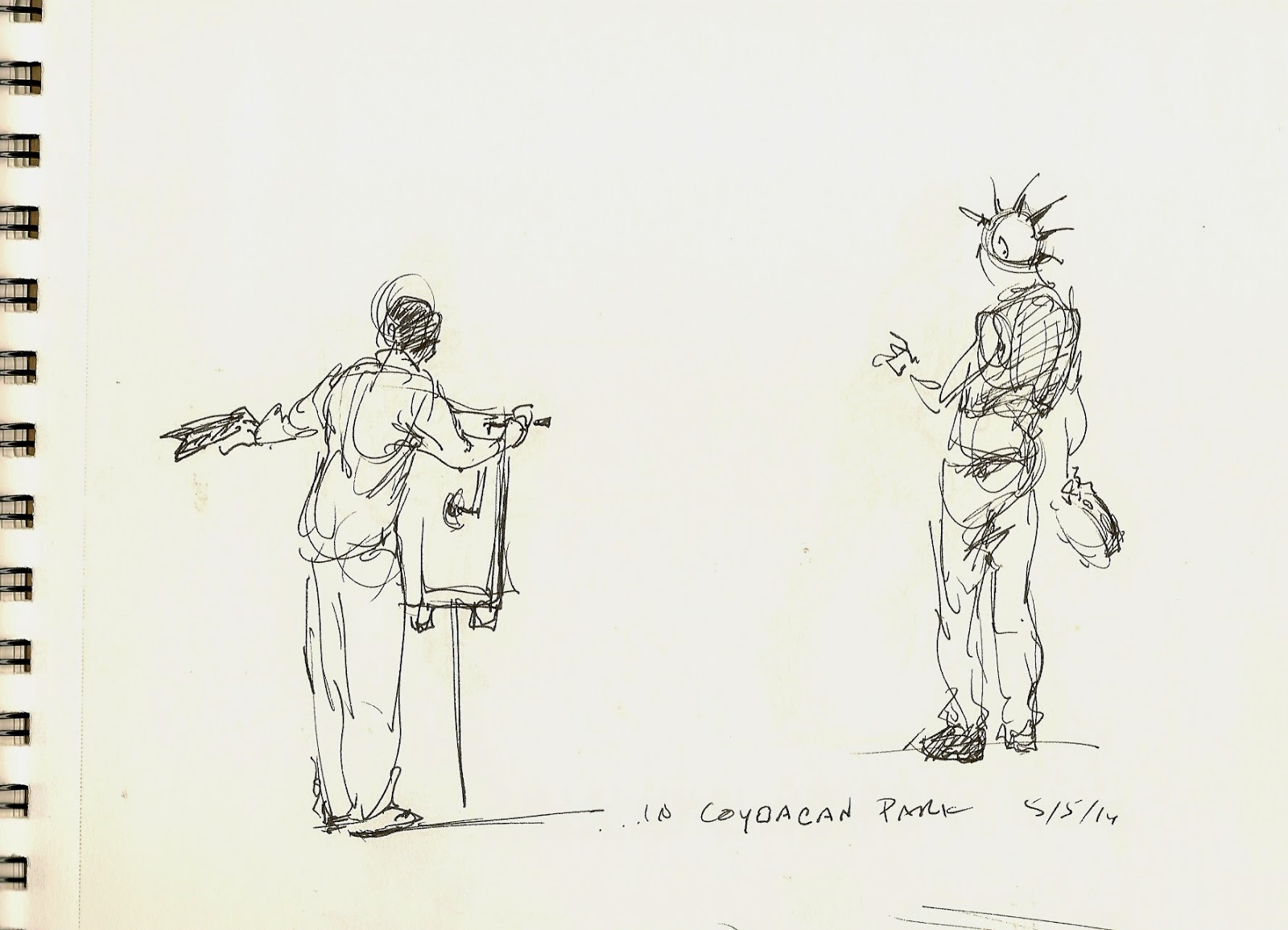 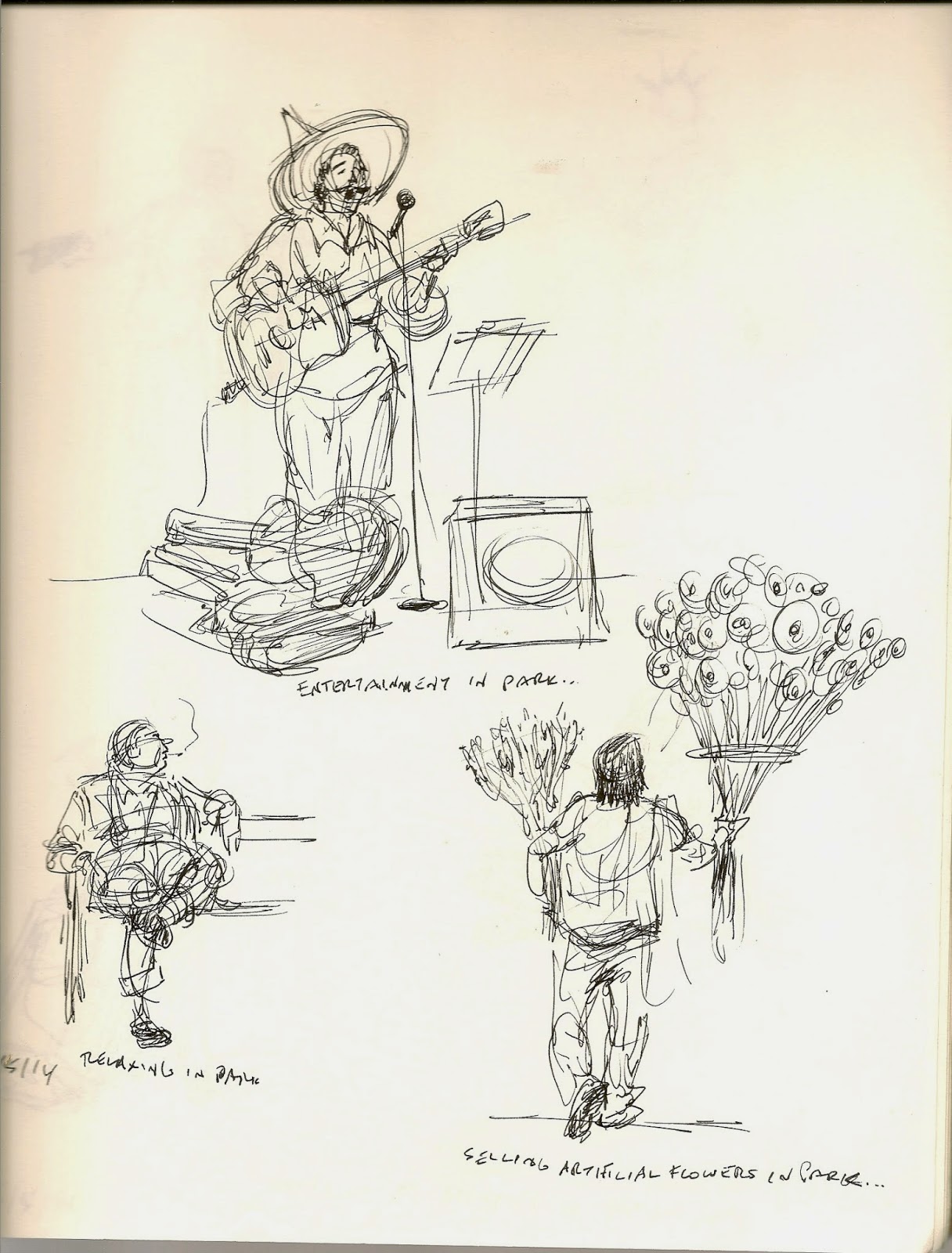 Our group decided to eat at an outdoor restaurant in the park (La Cerveceria de Barrio) before we headed to the airport.

Over tacos I asked the group about the history of Creata Fest...this was their answer:

'Animation is in it's infancy here in Mexico and our university (Technology Institute of Monterey) is teaching us how to run a studio. We want to learn how to be animators in a studio and work our way up the ladder and then run the studio. It is our desire to open our own studio some day".

"It is more economical to bring in animation talent than for students (such as we) to go to festivals held in the United States and other places in the world".

...in this their second year, the venue Expo Bancomer welcomed over 1500 participants over five days to hear guest speakers, be exposed to video games, visual effects, voice acting and more.

The audiences were addressed by: Peter del Vecho, producer of 2013 Oscar winner for the  Best Animated Feature, Frozen...

Allison Abbate who brought along a display of stop motion puppets used in Tim Burton's productions of "Frankenweenie", Mars Attacks" and other features.