Thumbnails...
My last post dealt with Beauty and the Beast and before I leave that feature, I'll share a few more thumbnail drawings.
Looking through my piles of 'stuff' in boxes out in the garage, I came across more thumbnail drawings from Beauty...drawings that visually help get the point across as to how important thumb nailing is in the planning out of a scene.
I usually execute these small drawings on a 8 1/2x11 paper, using pen or pencil. These little drawings helped me work out the action (below) on the boys in the tavern lifting Gaston and chair. Even rough timing  is evidence by the numbers  under the drawings.
I get to see in miniature approximately what the scene will look like and if it is pleasing to the eye. 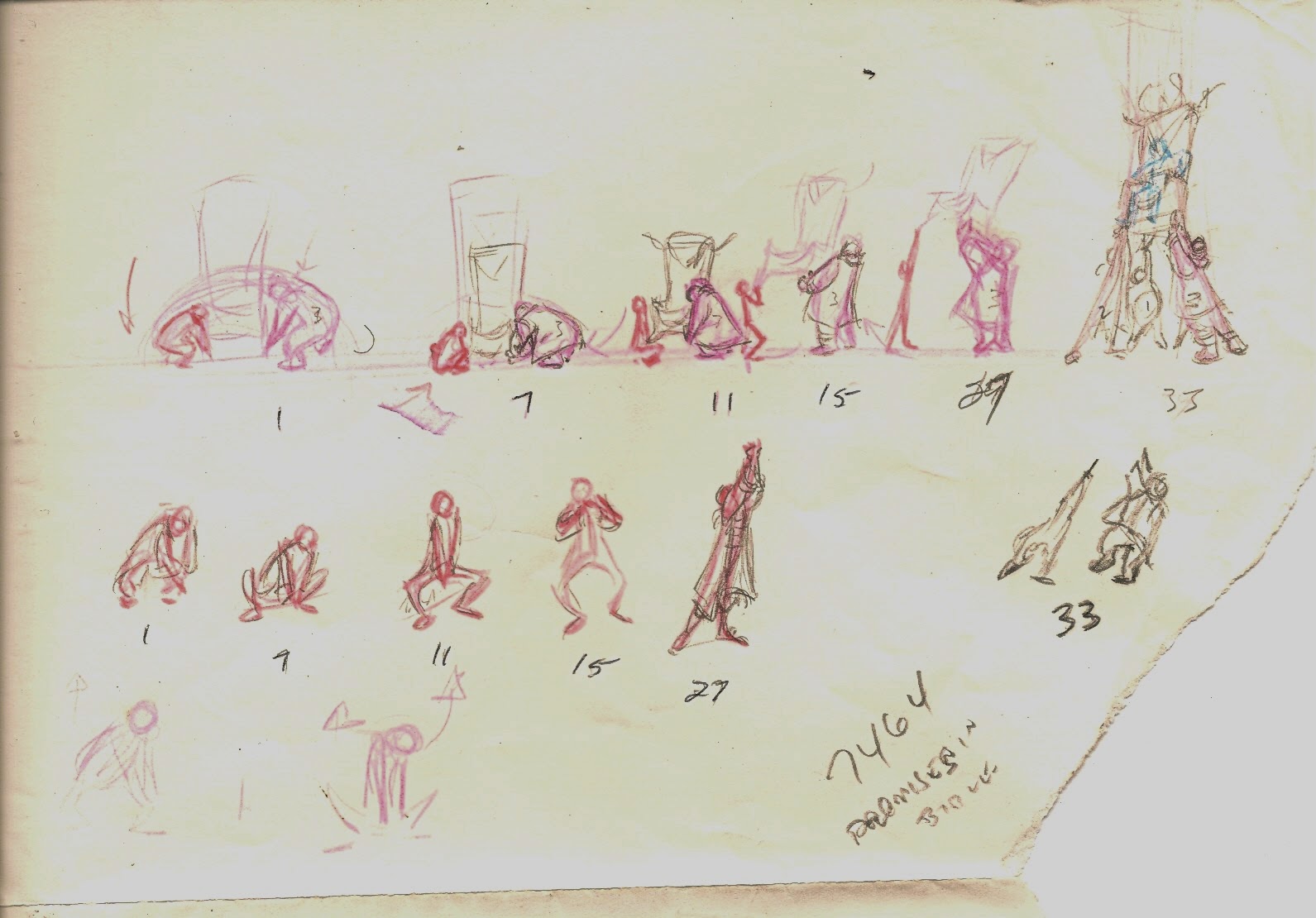 More thumbnails (below) take the action and other characters into the mix. I work out the steps of each character in this format, later to be transferred to rough animation. 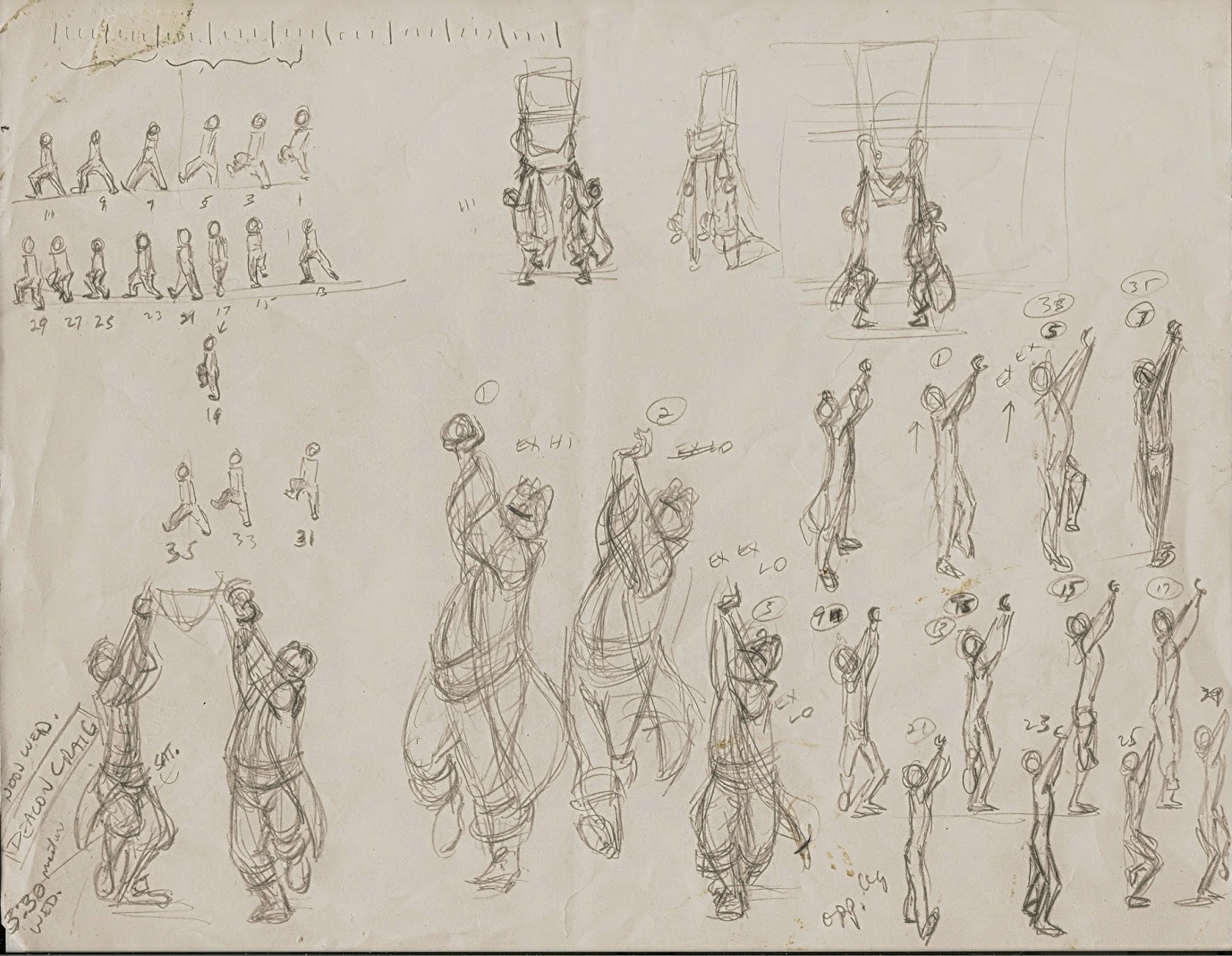 Gaston (below) delivering dialogue. This gives me a chance to figure out mouth shapes and the action that will take place as he throws his beer mugs. 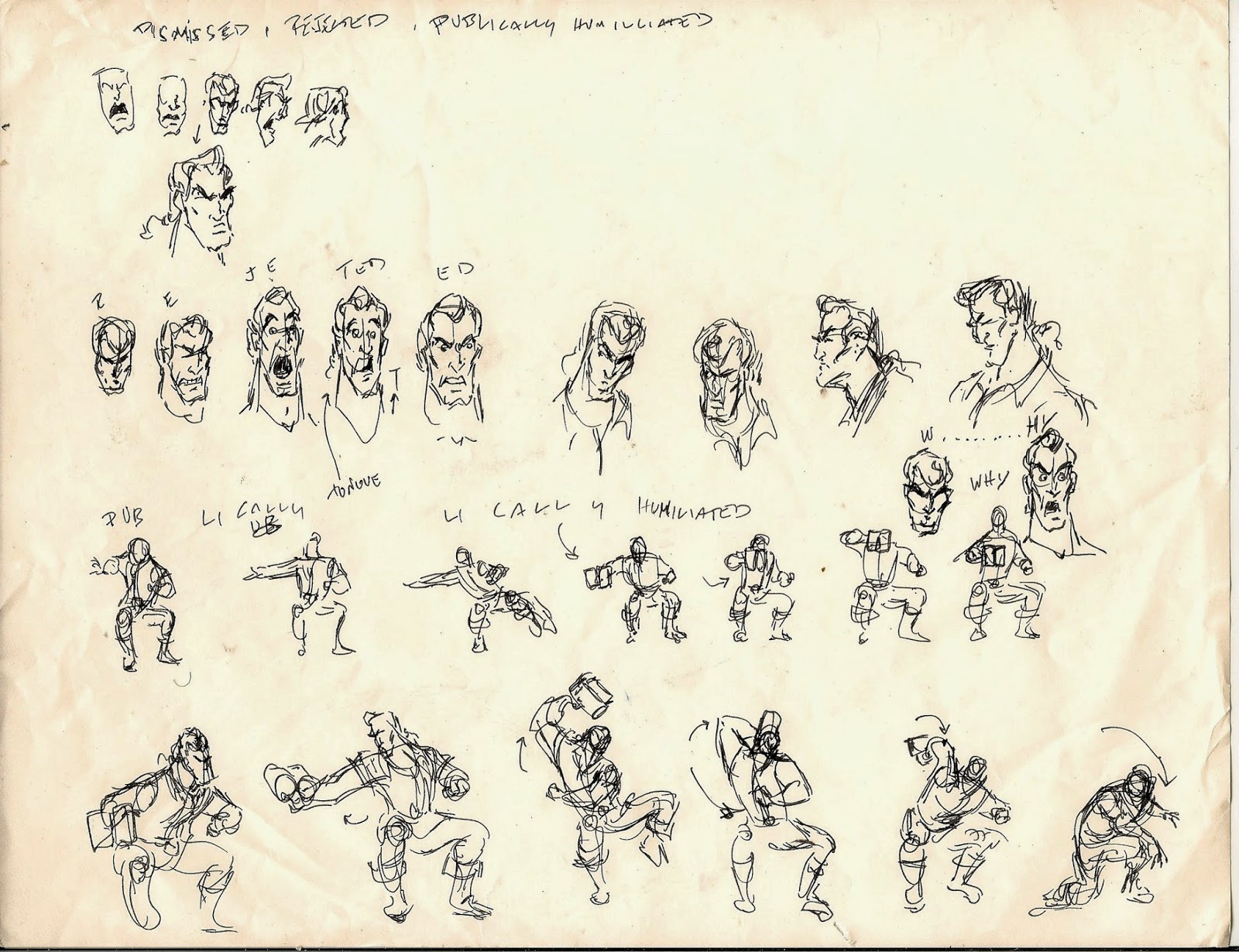 Gaston (below) on the roof walking over to pull off a piece of the building he can use as a weapon against the Beast. These small drawings give me a look at poses and approximate timing. 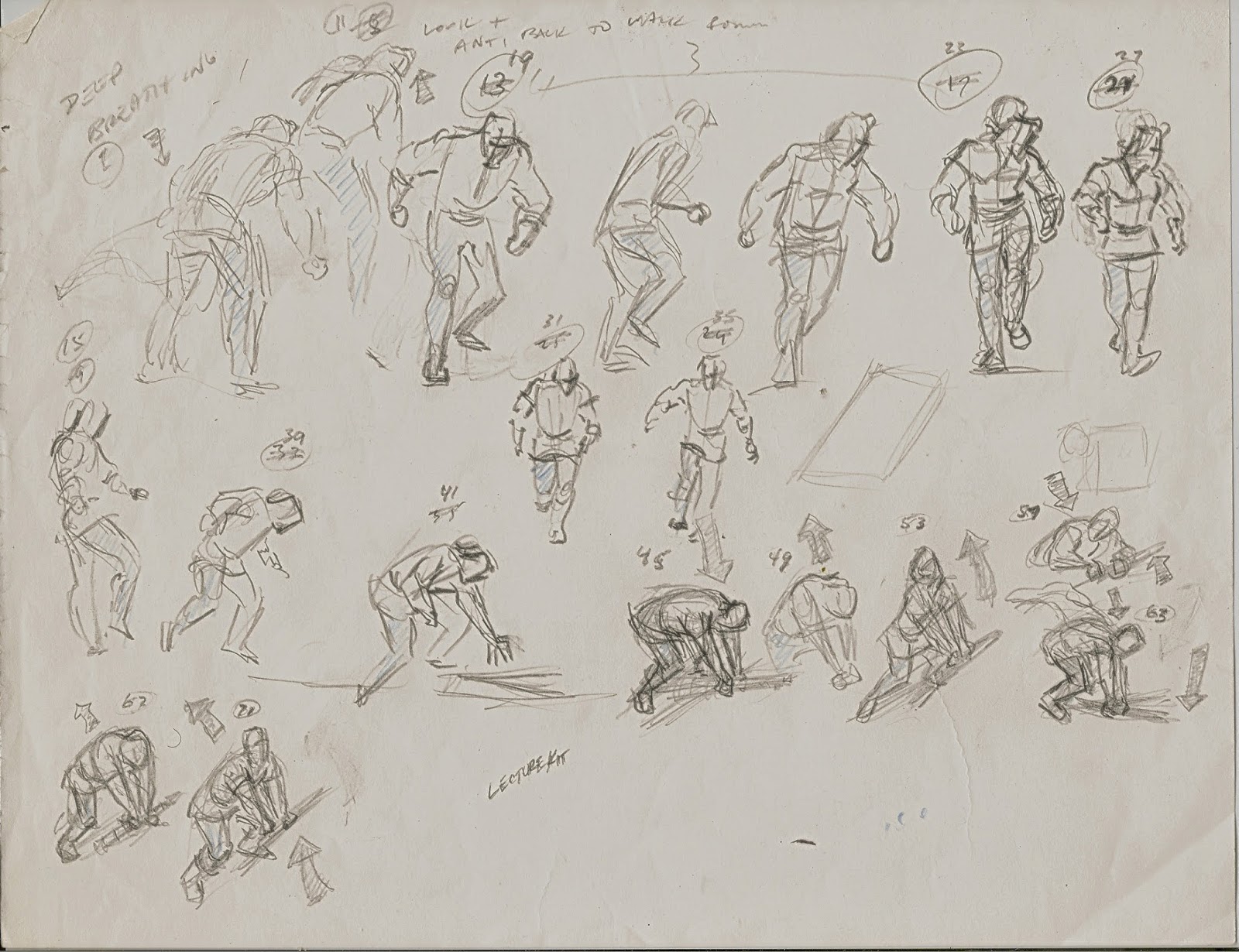 The choreography of Gaston and the Beast fighting (below) was worked out prior to any animating. Closer fielding and the rain effects were used to increase the drama, but you still have to have the characters grounded for believability and thumb nailing provided that. 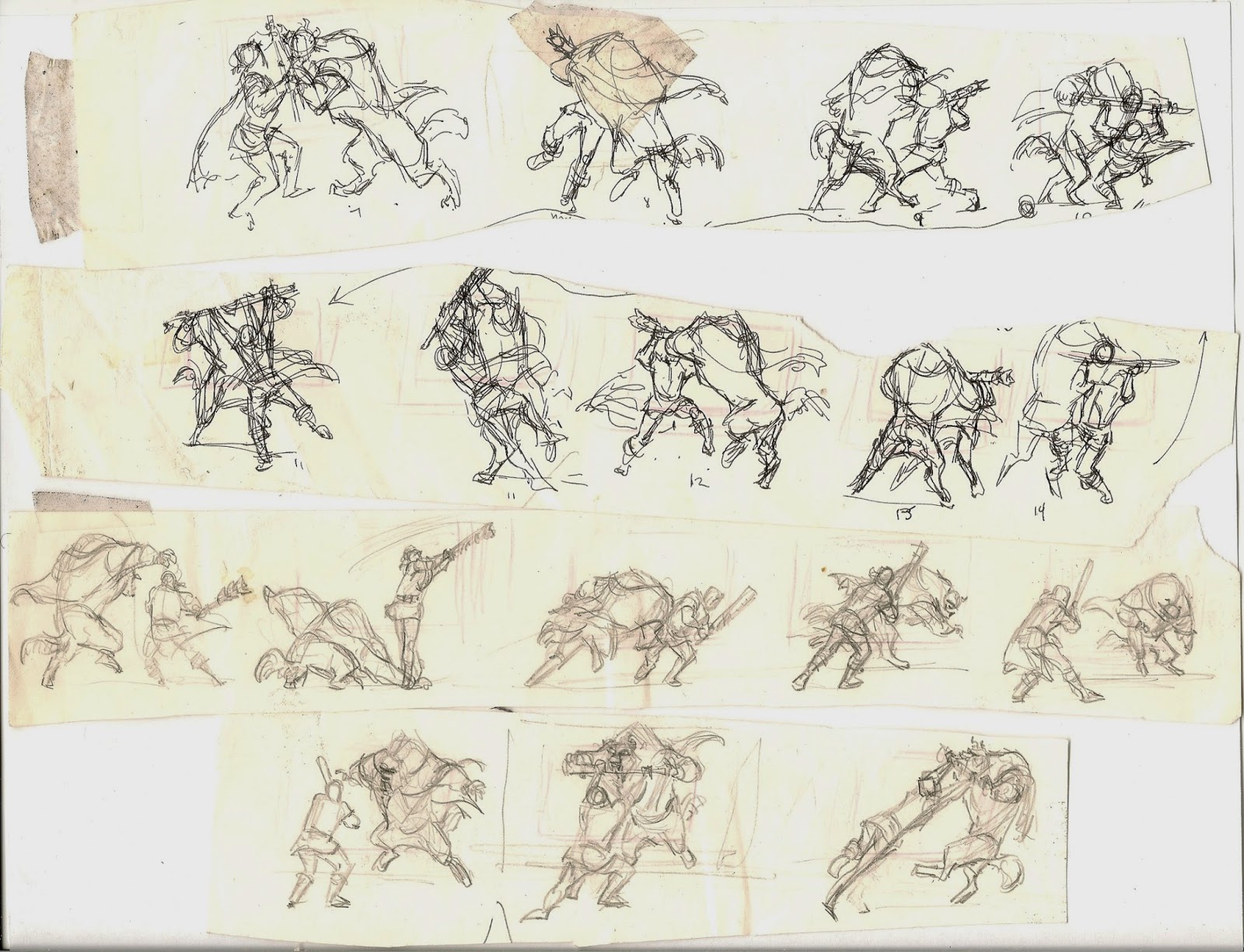 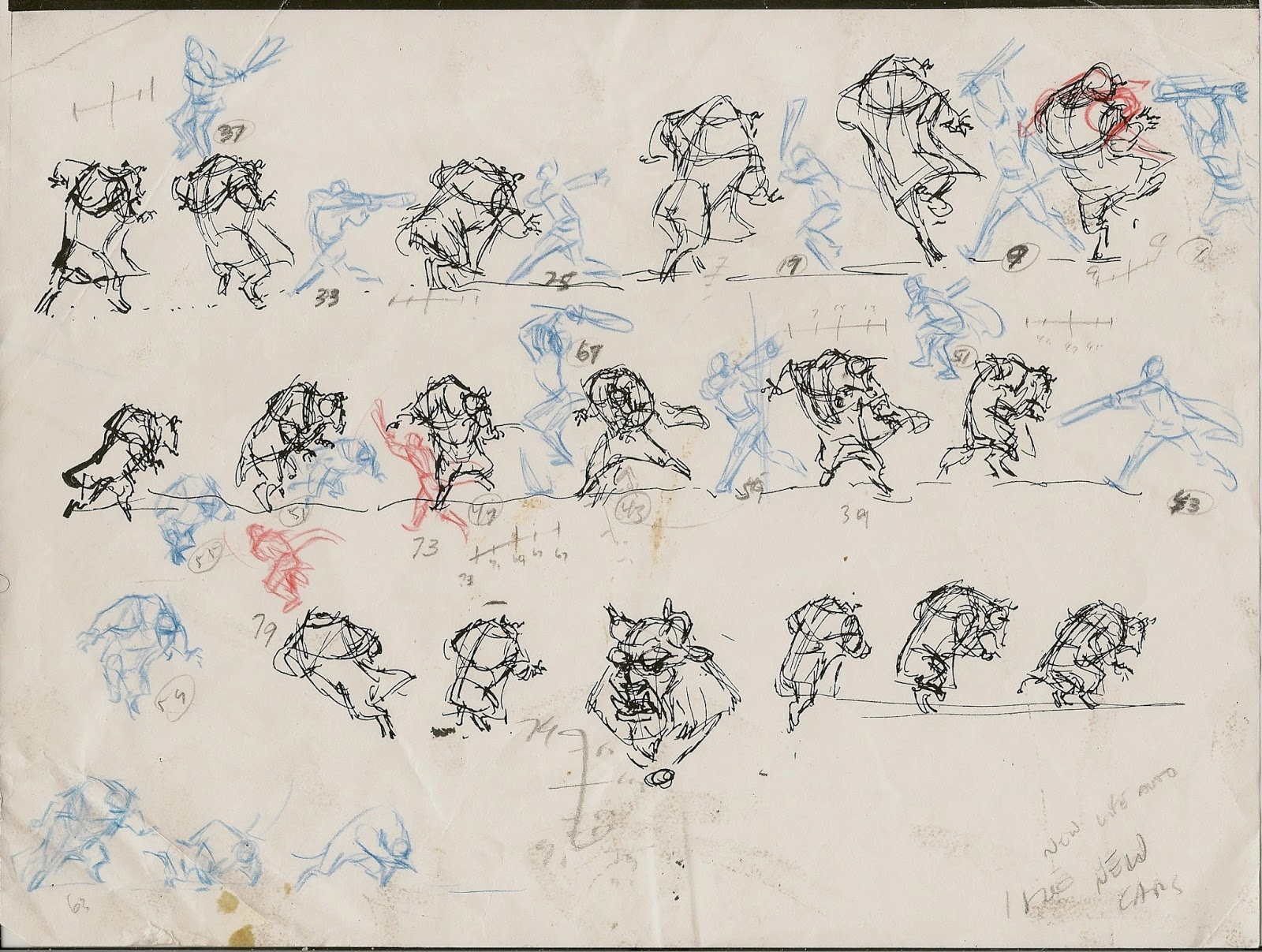 Thumbnailing for me is an offshoot of my quick sketching. The silhouette value, balance, proportion, perspective, recognizable (who is it), conveying an action or emotion are what I'm after when I quick sketch. Theses same values should be reflected in thumbs.

Beauty and the Beast

Next up was Beauty and the Beast... 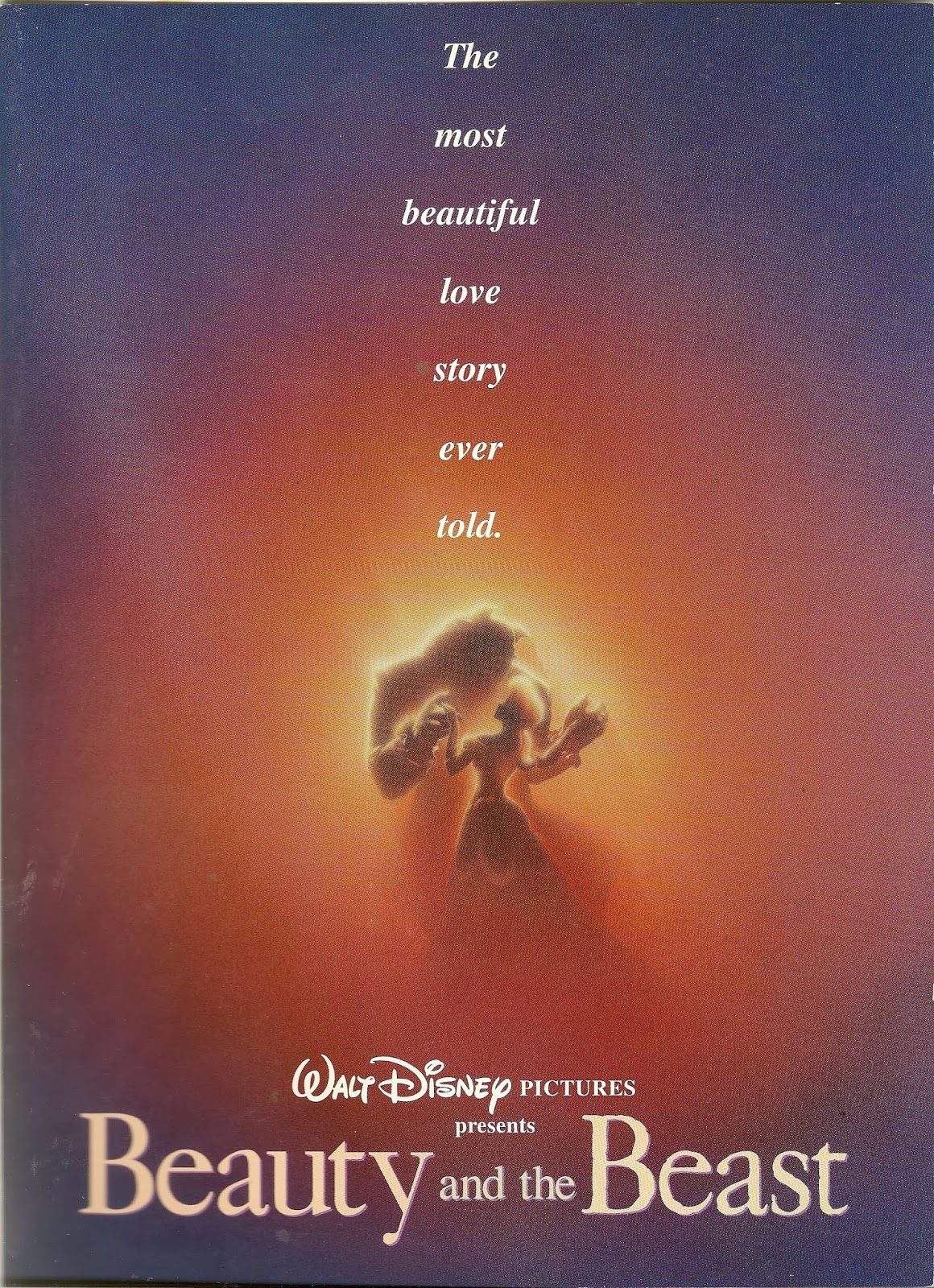 Here are some of the major players (right) who made Beauty and the Beast a classic: top far right is Glen Keane who designed and animated the Beast...to the left below Glen are directors, Gary Trousdale and Kirk Wise. Time would tell what a monumental achievement these guys pulled off. Middle left is producer Don Hahn who pulled it all together. To his right is Gaston, animated by Andreas Deja (I was a part of his unit). The bottom left is Lumiere, animated by Nik Ranieri and bottom right is James Baxter who brought movement to Belle. 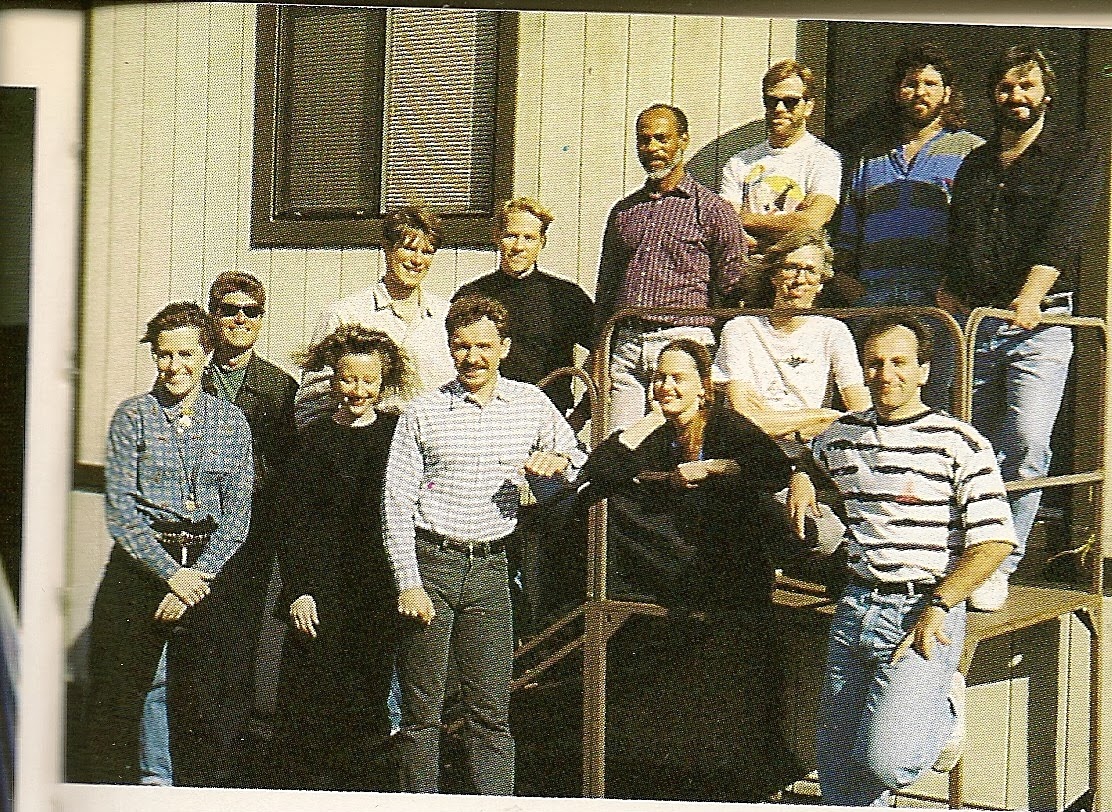 Above is the Gaston unit gathered outside our quarters- a trailer on Flower Street in Glendale. 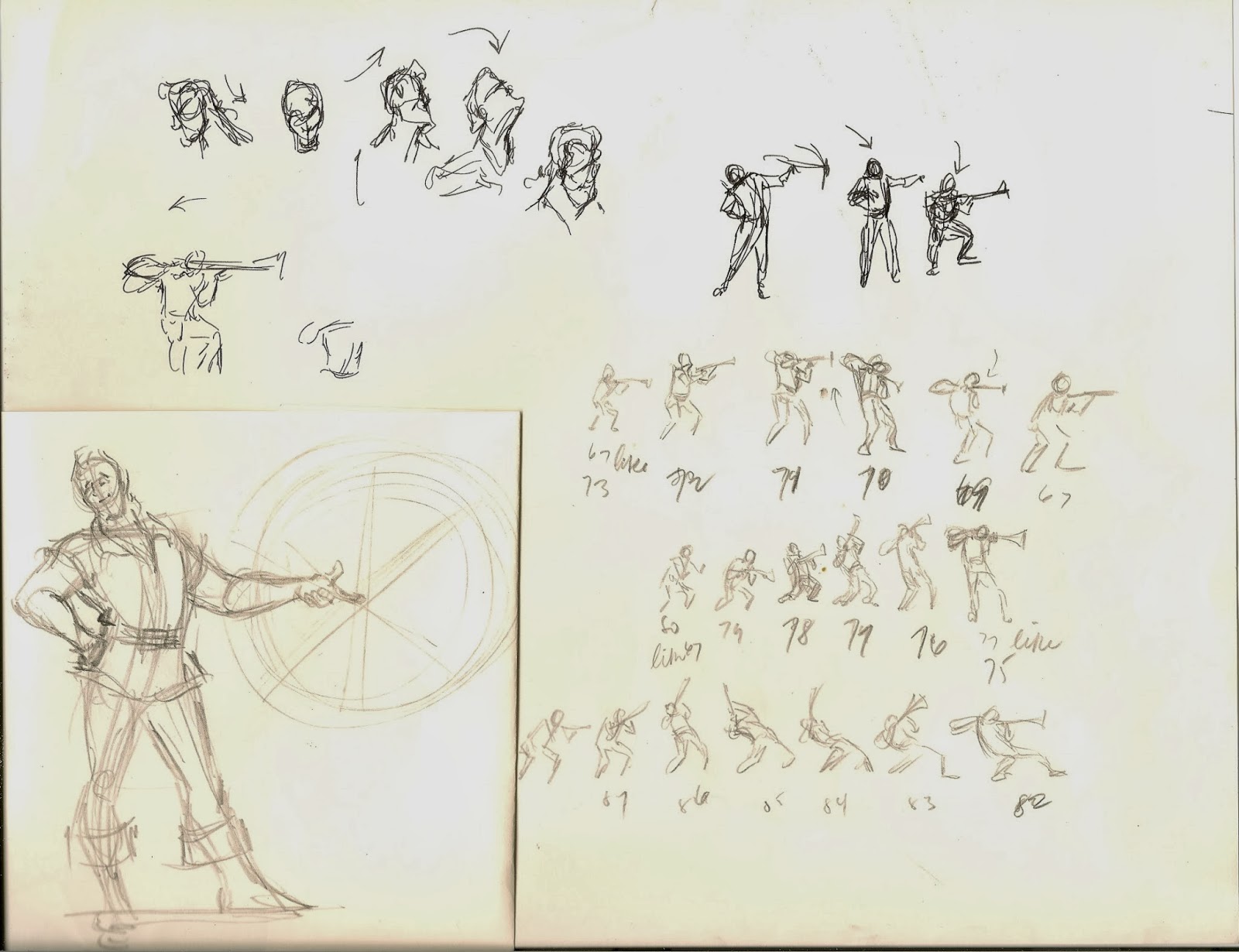 My thumbnails (right) of Gaston posing and firing his
rifle... 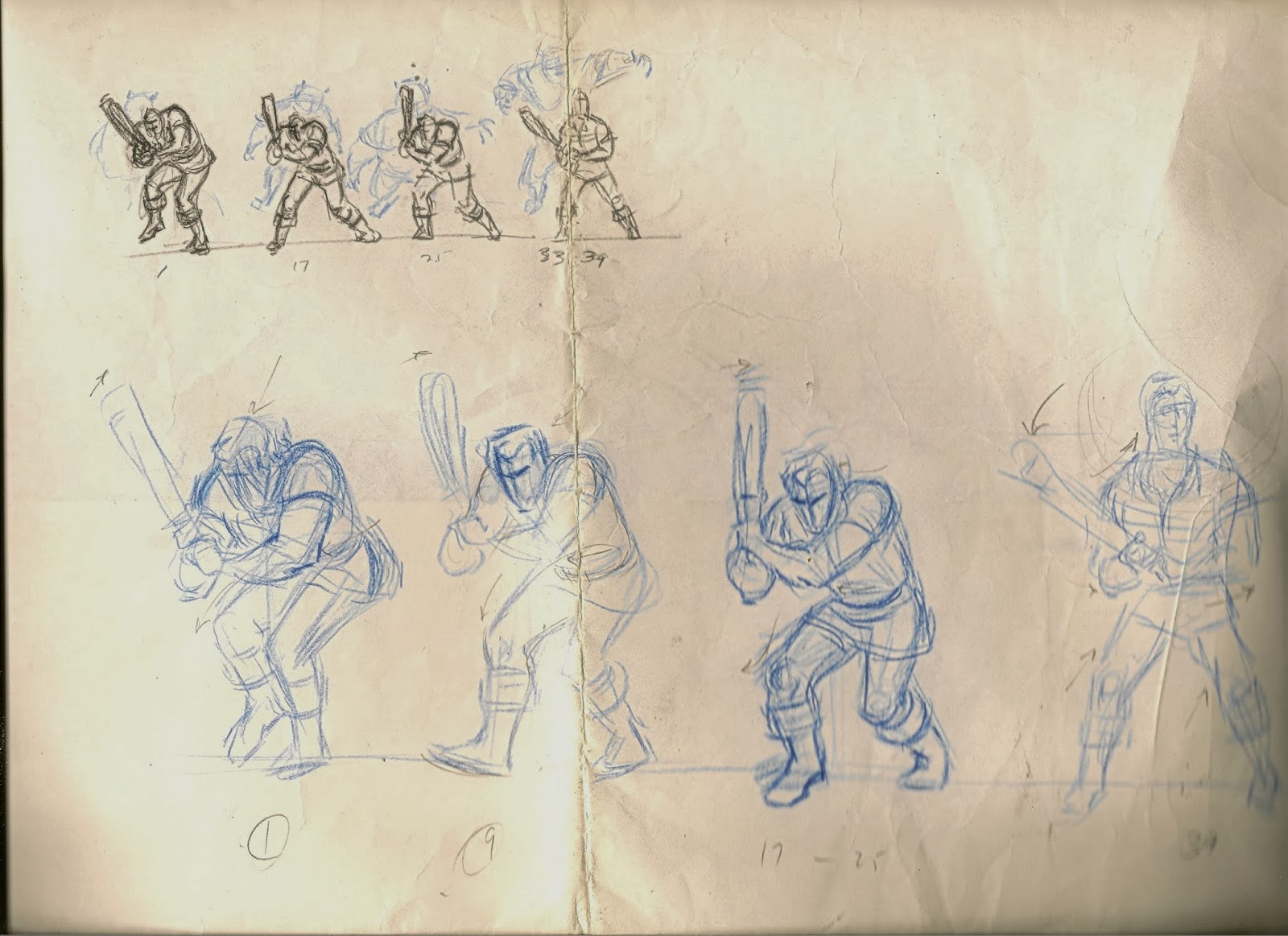 more thumbnails of Glen's Beast and Andreas' Gaston (top left and bottom right) helped choreograph my the fight scenes between the two. 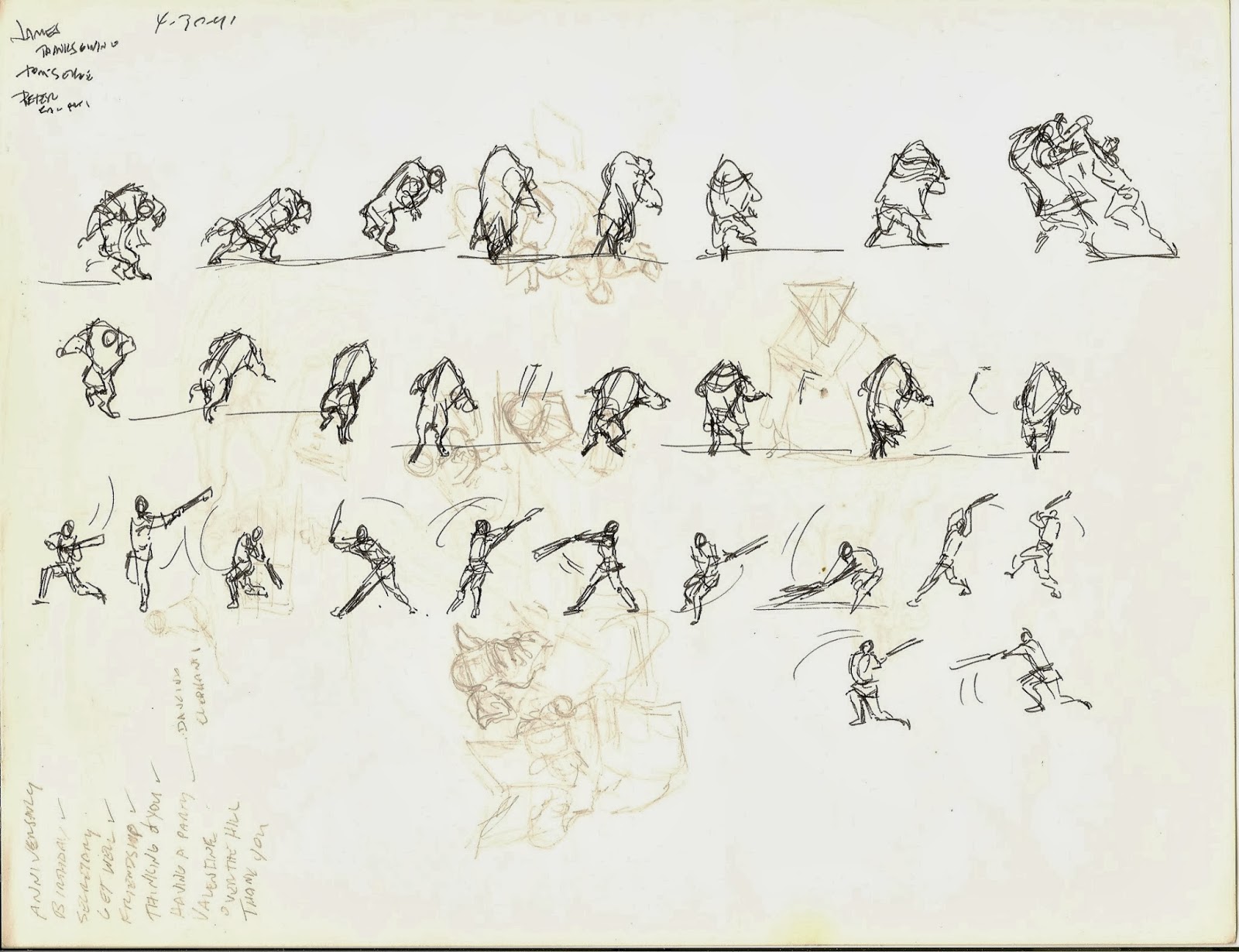 Once again thumbnails to the rescue as I animated the special effects of the spoons in the Be Our Guest song, patterned after the Busby Berkeley choreography of the 1930's musicals. 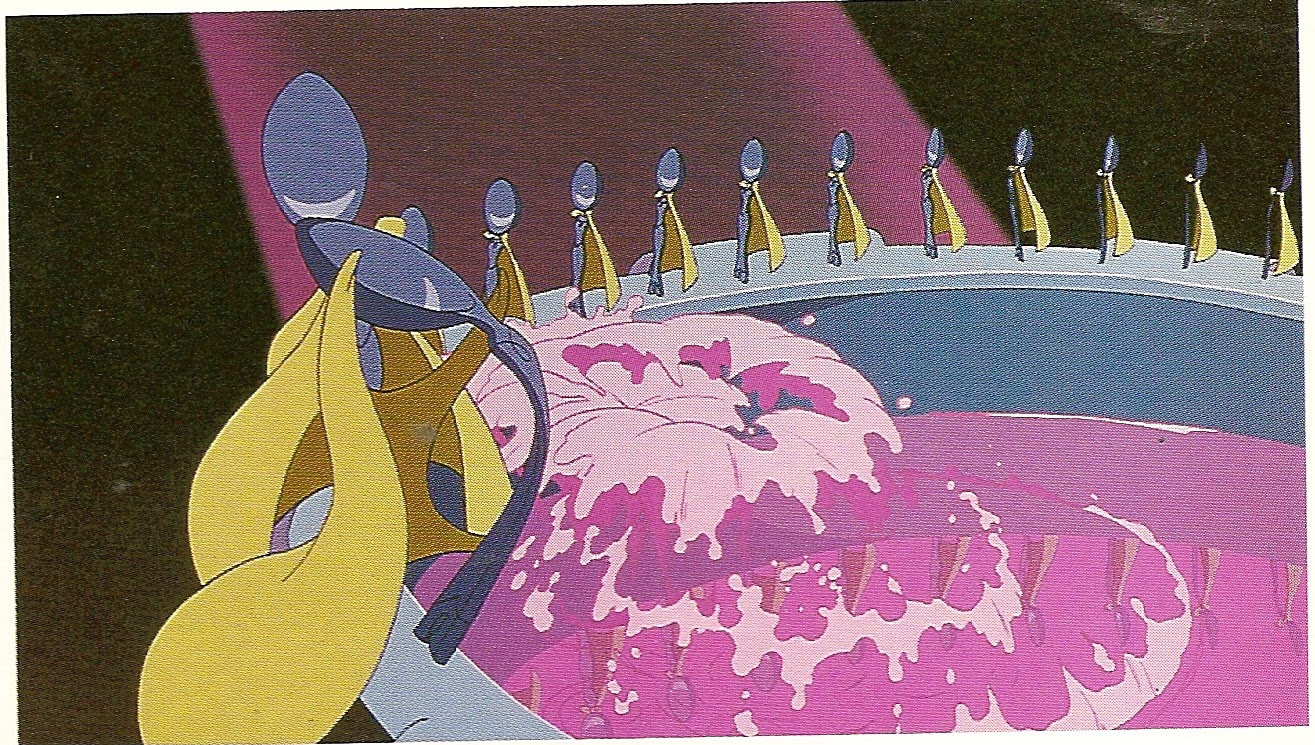 We got to see the movie with our families in the theater on Flower St. The premier  was held a few weeks earlier at the El Capitan Theater in Hollywood... 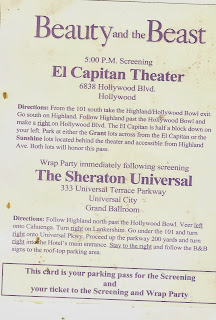 followed by the wrap party at The Sheraton Universal.

Accolades began to come in for the film... 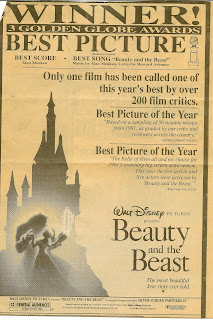 Best Picture at the Golden Globe Awards plus best song and score... 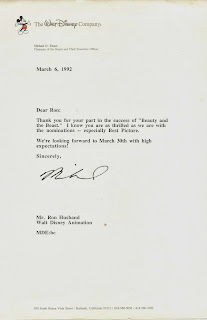 Then came the Academy Award nomination for best picture of the year. This is the monumental achievement that I mentioned earlier that Kirk and Gary pulled off . At the time there was no separate category for animated features. The B&B nomination was a first for an animated feature as it's competition was against live action films. 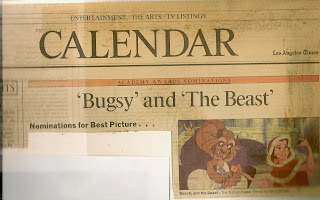 Big news headlines, Beauty and the Beast makes movie history. This historic moment was not well received by actors and movie purists who thought little of our craft.

The study of acting is a must by actor and animator as a convincing acting performance is sought by both.There are other similarities between what an actor does in his or her role and what an animator does with his character.

Live action actors depend on make-up, voice overs, stunt doubles, special effects etc. to help them before the camera.

The actor puts on an act. The Beast is not acting the Beast, he is the Beast, Belle is Belle. The acting performances that were achieved by the animators on Beauty and the Beast were done with pencil on paper.The animator acts with his pencil.

The award that year went to Silence of the Lambs, but animation made history that will never be repeated.

A good caricature is always in proper taste?...me by Glen Keane 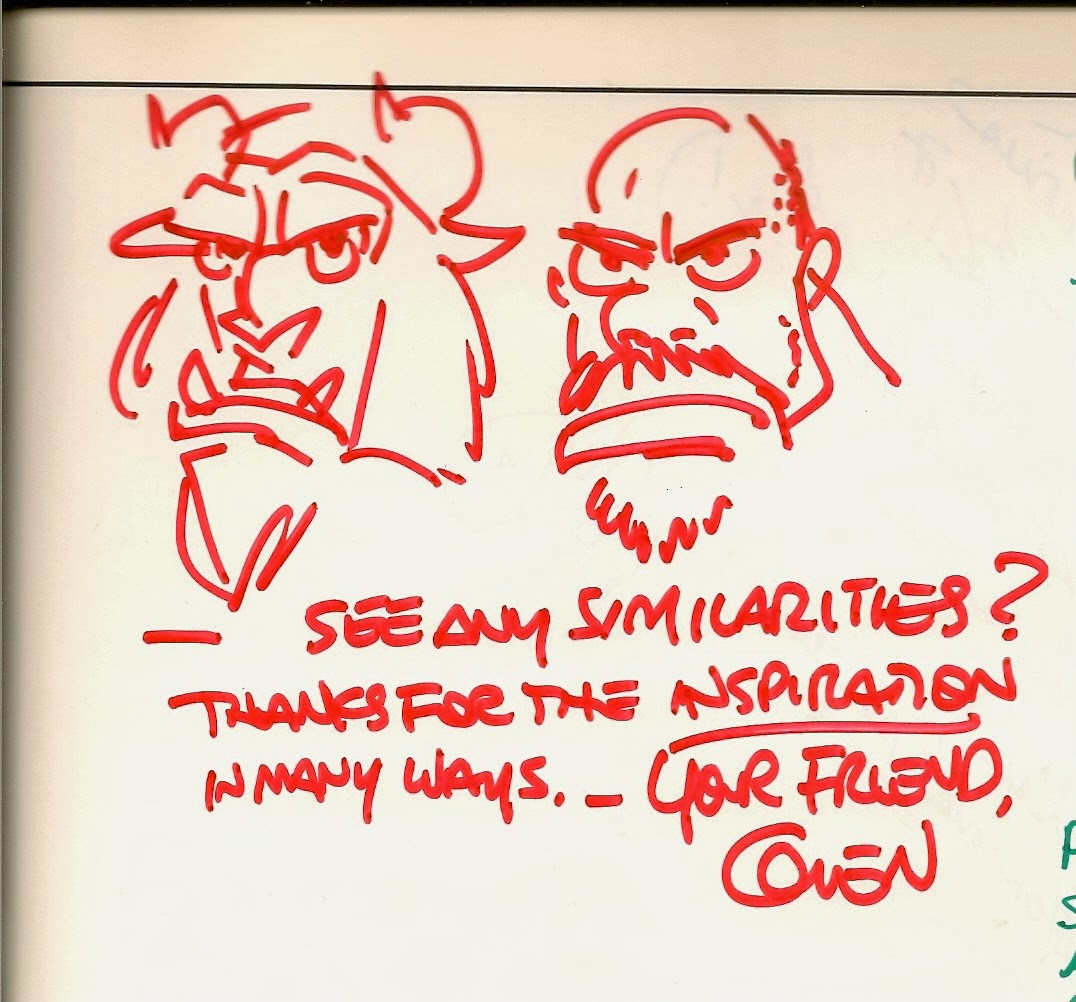 Glen and I did a lot of caricaturing of each other. It started when, together, we were moved from the second floor animation training rooms. Glen had come into the program about six months earlier and was already working on the Rescuers doing inbetweens and animating scenes for Ollie Johnston. I had just joined the ranks of Glen, Tad Stones, Randy Cartwright and a few others as permanent employees.
Glen and I were paired together in a corner office and the caricatures started to carom back and forth as we animated through the days,weeks, months and years.
I've got a stack that proper human beings should not have to lay eyes upon.
Posted by Ron Husband at 8:14 PM 3 comments: